Transport police in the Brazilian city of São Paulo have finally caught up with their nemesis, apprehending the driver of a 1996 Opel Corsa who owes the city more than $2 million in traffic fines.

The huge sum is the result of more than 970 infractions committed during the last five years, including such offences as speeding, running red lights and driving during restricted hours.

Intelligence officers from the state transport department had analysed the data contained in the fines to try and pinpoint where best to locate the vehicle, finally catching up with it outside a house in the south of the city on Tuesday.

The vehicle’s owner said he had no idea about the fines or that he owed so much money. Armando Clemente da Silva said he had not even been able to afford to transfer the car’s registration into his name when he bought it at an insurance company auction. This meant that despite his appalling record on the roads, he has received no penalty points on his driving licence…

If the debt is not paid in 90 days, then the car will be auctioned off, although police estimate that the fine stands at about 500 times the value of the car.

Uh, see where not paying attention will land you?

Ancient lava flows are guiding a better understanding of what generates and controls the Earth’s magnetic field — and what may drive it to occasionally reverse direction.

The main magnetic field, generated by turbulent currents within the deep mass of molten iron of the Earth’s outer core, periodically flips its direction, such that a compass needle would point south rather than north. Such polarity reversals have occurred hundreds of times at irregular intervals throughout the planet’s history — most recently about 780,000 years ago — but scientists are still trying to understand how and why.

A new study of ancient volcanic rocks shows that a second magnetic field source may help determine how and whether the main field reverses direction. This second field, which may originate in the shallow core just below the rocky mantle layer of the Earth, becomes important when the main north-south field weakens, as it does prior to reversing, says Brad Singer, a geology professor at the University of Wisconsin-Madison…

The scientists believe the shallow core field may play a role in determining whether the main field polarity flips while weakened or whether it recovers its strength without reversing. “Mapping this field during transitional states may hold the key to understanding what happens in Earth’s core when the field weakens to a point where it can actually reverse,” Kenneth Hoffman says.

It looks like Earth is approaching one of these transitional states, right now. The last polarity reversal occurred several hundred thousand years ago. The next might come within only a few thousand years.

A Colorado teenager hired men to kill his mother so he could use her money to get breast implants for his girlfriend, police said.

Barnett said Weis wanted to sell his mother’s car and use money in her bank accounts to pay for breast implants for Alsept, 21.

Fountain is about 10 miles south of Colorado Springs.

The kid’s brain is about 10 miles north of nowhere. His heart is missing.

The government is facing a fresh data loss embarrassment after thieves stole files containing the records of thousands of RAF personnel.

Police were called in to investigate the incident in which computer hard drives with information on present and former staff were stolen from the Service Personnel and Veterans Agency at RAF Innsworth, Gloucester. A spokesman for the MoD said: “We can confirm that an investigation is being conducted by the MoD police, with the support of Gloucestershire police into the apparent theft of three USB portable hard disk drives.”

It was not immediately clear what information was on the disks, but the spokesman said: “We are taking this extremely seriously.”

The loss is the latest in a succession of disquieting security breaches after the high profile disappearance last November of two CDs containing child benefit records – the personal details of almost half the UK population.

This is the same government that’s telling everyone the shiny new ID cards will be safe and secure – along with the database tracking everyone’s personal life.

Astronaut Zhai Zhigang became the first Chinese man to walk in space on Saturday, clambering out of China’s Shenzhou VII spacecraft in a technological feat that Beijing wants the world to marvel at.

“I’m feeling quite well. I greet the Chinese people and the people of the world,” Zhai said as he climbed out of the craft, his historic achievement carried live on state television.

Zhai, the 41-year-old son of a snack-seller, unveiled a small Chinese flag, helped by colleague Liu Boming, who also briefly popped his head out of the capsule.

Zhai re-entered the spacecraft safely after a walk of about 15 minutes, marking the high point of China’s third manned space flight, which has received blanket media coverage.

The space walk was a step toward China’s longer-term goal of assembling a space lab and then a larger space station.

Bravo! As a lifetime space geek, I applaud the youngest member of the spacefaring nations.

An Italian woman who worked as a part-time judge as well as a lawyer was substituted by her identical twin sister in court so she would not lose out on legal fees when she had two simultaneous engagements.

The 54-year-old twins from northern Italy have now been charged with fraud and will go on trial in January, Corriere della Sera, reported on its website.

One of the twins, identified only as Gabriella, worked primarily as a lawyer but also as an honorary judge, a part-time, paid position that entails helping full-time judges when their case load is heavy.

When Gabriella was called to be a substitute judge she sent her sister twin Patrizia to stand in for her at an existing engagement as a defense lawyer elsewhere in the Milan area.

The problem was that sister Patrizia was not a lawyer like sister Gabriella but charged the clients anyway.

You mean they weren’t politicians, as well?

It was a side trip through a destitute, ramshackle neighborhood in Ciudad Juarez, Mexico, that detoured Brian McCarthy from building houses in Albuquerque to an idea to offer the very poor a chance to own a home. 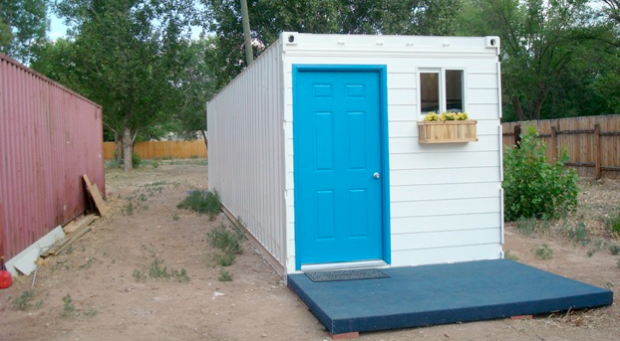 Shipping containers, such as on the left, will be converted into tiny homes, as seen on the right.

McCarthy, 30, and three partners, Pablo Nava, 22; Kyle Annen, 23; and Mackenzie Bishop, 22, have made a prototype out of a standard shipping container that hauls goods worldwide — a 320-square-foot home with a kitchen, bath with toilet, sleeping areas, windows and a bright blue door. The exterior is painted with a white epoxy coating that has light-reflecting properties to prevent the sun’s heat from penetrating.

Each small house includes hookups for air conditioning, ventilation, electrical and water systems, and the units ideally could be set up in small communities to make accessing utilities more efficient.
END_OF_DOCUMENT_TOKEN_TO_BE_REPLACED

The bad news: the British banks are in tough shape and really think they need a bailout.

The good news: they aren’t counting on Congress to provide it.

A study by researchers from Lancashire, England, and Chicago, IL, found that 97 percent of campylobacteriosis cases sampled in Lancashire were caused by bacteria typically found in chicken and livestock. The work is based on DNA-sequence comparison of thousands of bacteria collected from human patients and animal carriers.

Campylobacter jejuni causes more cases of gastroenteritis in the developed world than any other bacterial pathogen, including E. coli, Salmonella, Clostridium and Listeria combined. Wild and domestic animals act as natural reservoirs for the disease, which can also survive in water and soil.

Researchers led by Daniel Wilson, of the University of Chicago, and formerly Lancaster University, United Kingdom, sequenced the DNA of bacteria collected from 1,231 patients and compared it to Campylobacter jejuni DNA sequences collected from wild and domestic animals, and the environment. They used evolutionary modeling to trace the ancestry of human C. jejuni back to one of seven source populations.

In 57 percent of cases, the bacteria could be traced to chicken, and in 35 percent to cattle. Wild animal and environmental sources were accountable for just three percent of disease.

“The dual observations that livestock are a frequent source of human disease isolates and that wild animals and the environment are not, strongly support the notion that preparation or consumption of infected meat and poultry is the dominant transmission route,” Wilson said.

Further studies are underway in the United States, the United Kingdom and New Zealand to determine the generality of the result. But the authors say they hope the current study will add impetus to initiatives aimed at controlling food-borne pathogens.