U.S. intelligence agencies conclude in a draft report that Afghanistan is in a downward spiral and they doubt whether the Kabul government can stem the Taliban’s rise. The classified report says corruption inside President Hamid Karzai’s government and an increase in attacks by militants operating from Pakistan have accelerated the breakdown in central authority in Afghanistan.

“Afghanistan is a difficult place. It has made progress since 2001. We have all talked about new circumstances that have arisen there and we are doing a review to look to see what more we can do,” Condoleeza Rice told reporters.

We are looking to see where some of the strengths are and how we need to support those strengths and also how we can help the Afghans where there are weaknesses,” Rice said.

The New York Times said the estimate, or NIE, is set to be finished after the November elections [No kidding] and will be the most comprehensive U.S. assessment in years on Afghanistan.

A senior official said last month estimates for many parts of the world were being updated for use by the next U.S. president, who will take office in January.

Hopefully, that next president will have a broader view of the world, an understanding of history, an appreciation of cultures beyond Ivy League failures and neocon ivory towers.

I speak with a bit more than native cynicism – over 50 years worth of watching bi-partisan greed and lies – when I say I hope for a qualitative change in American foreign policy.

The Maple Leaf plant was closed in August after being identified as the source of the bacteria that killed 20 Canadians and was stripped down and sanitized. It reopened Sept. 17, although none of its products have been going to market but rather to federal inspectors.

Bob Kingston, president of the Agriculture Union that represents CFIA inspectors, told the newspaper it was “mind-boggling” there could be more positive listeriosis results from the plant.

“They’re cleaning up their place with the whole world watching and they still don’t get it right?” he said.

So unaccustomed to quality standards they can’t get it right under supervision and bright lights?

NASA scientists developing the next generation of exploration vehicles and heat shields for NASA’s Orion Crew Exploration Vehicle experienced “Christmas in July” when they uncrated the heat shields used on the Apollo missions some 35 years ago. These shields now are being analyzed to help with the development and engineering process.

NASA scientists and engineers working on the Orion Crew Vehicle System went to the Smithsonian Institution’s Air and Space Museum. The Garber Facility curators and conservators collect, preserve and restore all things air and space. This includes airplanes, spacecraft, and spacesuits.

“We started working together at the end of June to track down any Apollo-era heat shields that they had in storage,” said Elizabeth (Betsy) Pugel of the Detector Systems Branch at NASA Goddard. “We located one and opened it. It was like a nerd Christmas for us!”

“We are examining the design of the carrier structure (the metal structure that connects the heat shield to the vessel that contains the astronauts) and the heat shield material’s thermal response,” Pugel said.

See. It helps to be a world-class pack rat. 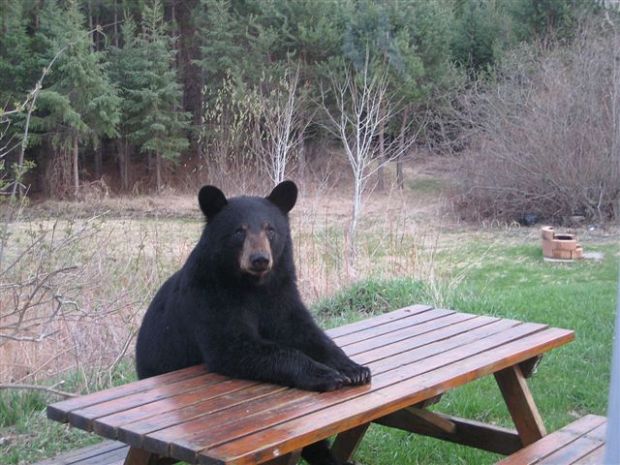 A bear gnawing on a fuel tank valve is suspected as the cause of a 1,000-gallon diesel fuel spill on British Columbia’s west coast. Sometime last weekend, a valve on the tank at a remote fishing camp in Rivers Inlet, 300 miles northwest of Vancouver, was opened, leading to a spill and creating an oil slick miles long.

“A very hungry, desperate bear will go for fuel,” he said. “It has a sweet taste so they will consume fuel and oil.”

Life is like a box of chocolates – ain’t it?

Just for Cinaedh and his luncheon guest 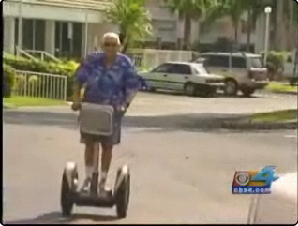 Stanley Blumenthal took his Segway Personal Transporter for a spin around his condo complex Tuesday. It will be one of his last rides on the two-wheeled device if the condominium’s board of directors has its way.

When Blumenthal got his one-person set of wheels two years ago, the condo’s board wrote a rule banning the device…

“We feel that he’s a danger to the people that live here,” board member Al Smith told CBS4’s Nelson. “He can be coming around the corner and run you over with that 100 pound vehicle. I just think it’s a danger to everyone here.”

Blumenthal points out that golf carts are permitted to scoot around the condo complex, as are people in motorized wheel chairs, bicyclists and riding lawnmowers.

One of the delights of republican democracy is that you get to turn over your governance to shitheads.

Companies have been trying to create their own social networks ever since Friendster became popular. It was part fad and part marketer’s hope that customers were so devoted that they were dying to discuss shampoo or tires online.

With a campaign beginning this month, Vaseline is testing a more conceptual approach. Rather than creating an online social network, it is aiming to map the social network of a small town in Alaska.

The idea is to show that a new Vaseline lotion, Clinical Therapy, is so effective that the residents of Kodiak, Alaska, passed the word around. It was partly of their own accord, and partly because Vaseline was pushing it: Vaseline representatives set up shop in a storefront in Kodiak and gave away free bottles. The residents had to pinpoint which of their fellow townspeople had recommended it.

Vaseline representatives began mapping who was suggesting the lotion to whom. It was not curiosity that drove them, but commercialism. They were trying to find a plugged-in Kodiak resident who had widely recommended the lotion, to be featured in commercials.

Har. Any other suggestions?

It appears even technology cannot cope with the global financial crisis: the National Debt Clock in New York has run out of digits for the first time.

The electronic billboard hit its limit after US public debt rose above the $10 trillion mark for the first time on September 30.

As a temporary fix the dollar sign has been switched to a figure–the ‘1’ in $10 trillion. The clock is currently marking the US federal government’s national debt at about $10.2 trillion.

The Durst Organization says it plans to update the sign next year by adding two digits. That will make it capable of tracking debt up to a quadrillion dollars.

Certainly, Congress and the White House will figure out how to keep up their end of the competition.

A winner of the Nobel Prize in chemistry said one of his first tasks was to join a group of Nobel winners who endorsed Democrat Barack Obama for president.

The 61 Nobel winners published an open letter last month saying the nation “urgently needs a visionary leader who can ensure the future of our traditional strengths in science and technology” to address issues such as energy, disease and economic competitiveness.

“We really need to have more support for science in the White House, and we haven’t had that in the last eight years,” said Martin Chalfie, a professor of biological sciences at Columbia University.

Upon learning he won, Chalfie said he contacted a friend, Robert Horvitz, who won the Nobel Prize for Medicine in 2002, to join the Obama supporters. Horvitz was one of the 61 Nobel winners in medicine, physics and chemistry to sign the letter.

In the letter, the Nobel winners wrote that during the Bush administration…”Our once dominant position in the scientific world has been shaken and our prosperity has been placed at risk.”

“Sen. Obama understands that presidential leadership and federal investments in science and technology are crucial elements in successful governance of the world’s leading country,” they wrote.

Russian troops have completed a pullout from buffer zones next to breakaway Georgian regions that it had established during a war between the two countries in August.

“We can confirm that from the so-called buffer zones the withdrawal is complete,” said Shota Utiashvili, a Georgian interior ministry spokesman…

The buffer zones, which are on Georgian territory, adjoin the breakaway, pro-Russian areas of South Ossetia and Abkhazia…

The zones were created outside the two regions, which have unilaterally broken away from Georgia, after Russia sent tanks and troops to repel a Georgian offensive to retake South Ossetia in August.

Russia plans to keep 7,600 troops in the separatist regions, which it recognised as independent states after the war.

War is never funny. Though humor is as common as hypocrisy. The latter is practically enshrined in American foreign policy. Especially concerning separatist movements.

Even in “domestic” politics – we supported the “separatist” land grab of Texans from Mexico while suborning the democratic rights of Mormon citizens in every state till they finally established Utah as safe haven.

Kosovo’s “independence” is a holy crusade; but, South Ossetia is somehow an evil “breakaway” attempt. If Christianity didn’t beat us to hypocrisy, we would have had to invent it.