The chief executive of HSBC, the world’s fourth-largest bank, has warned that the state-sponsored bail-outs of western banks could encourage a return of reckless behaviour in the City and other financial centres.

Michael Geoghegan said the conservative policies followed by his bank in recent years, which were criticised by some shareholders, had provided a solid base to weather the financial storm. He said rival banks had taken risks and been punished by the markets – only to be rescued by the government’s £37bn package.

He said: “I hope these guarantees are not in place for too long. They may create the wrong type of behaviour by managements in those banks…”

Although the bank yesterday announced a huge write-down on its US operation and predicted the financial turmoil would greatly slow economic growth around the world, it was upbeat about its prospects.

The bank said it had boosted its finances, maintained its dividend and declared only a small dip in profits after successfully navigating the events of the past month that saw all its UK rivals survive only with a £37bn bail-out. Geoghegan said the crisis showed how HSBC’s policies protected shareholders when times were tough.

Cripes. HSBC lends money based on real assets and makes a profit. Why should they have to tolerate competition from sleazy, semi-solvent hustlers who profited – for a while – from illicit property valuations?

Two of Scotland’s most unusually coloured lobsters have become a huge visitor attraction.

The colourful crustaceans, one a vivid orange and the other electric blue, would normally have ended up on a dinner plate in an upmarket restaurant.

But their bizarre colours have saved them from the boiling pot because the fishermen who caught them off the coast of Fife thought they were so unusual.

In my youth, subsistence fishing on the New England coast, we’d catch an odd fish every now and then. I hope none were sports like these – because we ate every one.

A giant economic stimulus package announced by China lifted stocks in Asia as investors anticipated soaring orders for companies that might benefit from increased infrastructure spending, and took heart from the fact the slowdown in economic growth might not be as marked as feared…

“All this infrastructure spending will be a big positive for companies in sectors like construction, engineering, mining, energy,” said Puru Saxena the chief executive of Puru Saxena Wealth Management in Hong Kong. “This is definitely is a step in the right direction by the Chinese, they have a lot of firepower, and their top priority has to be to create jobs.”

The Chinese stimulus package will bring $586 billion-worth of spending on railroads, airports, other infrastructure and social welfare projects. Key rural land policy changes have also been announced recently as the authorities grapple with the fact that the economy, which had been powering ahead at 10 percent growth or more in recent years, is set to grow by 8 percent or less this year as the global economic downturn takes its toll on exporters…

Although analysts had been expecting China to announce a major stimulus package, they had not been expecting anything of this magnitude. The size of the package, combined with some of the wordings accompanying its announcement Sunday, indicated the government wanted to send the message that it would do whatever it takes to support economic growth.

Do you think that this might also be an easier stretch for a nation that isn’t involved in a couple of foreign wars? One that doesn’t maintain military forces around half the planet?

Barack Obama’s election as U.S. President opens up a new front in the pressure mounting against Swiss banking secrecy, already under fire from Germany which wants the country put on a tax haven blacklist.

Obama has singled out Switzerland’s UBS as one of the banks who helped “tax cheats” and he also helped introduce a Senate bill last year to crack down on offshore tax havens.

“The pressure on Switzerland will definitely increase now,” Martin Naville, head of the Swiss American chamber of commerce, told the Tagesanzeiger daily, advising the government to approach the new U.S. administration to improve the country’s image.

“Anybody who wants to get Switzerland out of the firing line cannot go with empty hands,” he said, adding that the U.S. authorities did not understand the Swiss distinction between tax fraud and tax evasion, only helping in probes into the former.

UBS, already reeling as Europe’s worst hit bank in the credit crisis, is under investigation by U.S. authorities into charges it helped wealthy Americans dodge taxes by hiding their cash in Switzerland.

A Swiss newspaper reported last month that 250 U.S. customers of UBS had been given 30 days to appeal against Switzerland handing over their details to the U.S. authorities.

Meanwhile, Germany called last month for Switzerland to be put on a list of uncooperative tax havens which currently includes Monaco, Andorra and Liechtenstein. French President Nicolas Sarkozy has also called for tax havens to be banned.

Switzerland is the world’s biggest offshore center with about $2 trillion or about 27 percent of estimated global offshore assets, according to the Boston Consulting Group.

I hadn’t realized that tax evasion is not a crime in Switzerland. Is it considered a sport – like in Italy?

Here are seven clear signs you might have a work spouse:

1. You depend on a particular co-worker for office supplies, snacks and aspirin.

2. There are inside jokes that you and a specific co-worker share.

3. You can be bluntly honest with this person about his or her appearance, hygiene or hair (and vice versa). You’re comfortable enough to point out that the other’s hair is sticking up — or that someone’s fly is down.

4. When something eventful happens at work, this co-worker is the first person you seek out for a de-briefing.

5. At breakfast, lunch and coffee breaks, your closest co-worker knows what to order for you and how you like your coffee (and vice versa).

6. You and your co-worker can finish each other’s sentences.

7. Someone in your office knows almost as much about your personal life as your best friend or real-life spouse does.

I know people who think they have software that fills this function for them. 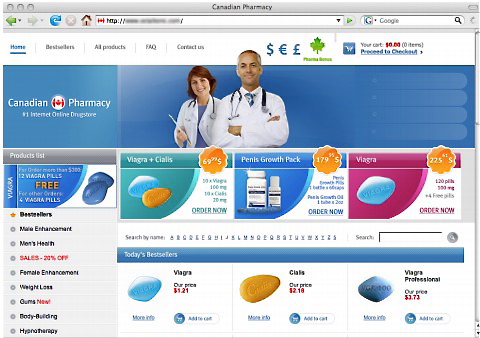 By hijacking a working spam network, US researchers have uncovered some of the economics of being a junk mailer. The analysis suggests that such a tiny response rate means a big spam operation can turn over millions of dollars in profit every year.

It also suggests that spammers may be susceptible to attacks that make it more costly to send junk mail.

For their month-long study the seven-strong team of computer scientists infiltrated the Storm network that uses hijacked home computers as relays for junk mail. The team, led by Assistant Professor Stefan Savage from UCSD, took over a chunk of the Storm network to make it easier to run their study.

They created several so-called “proxy bots” that acted as conduits of information between the command and control system for Storm and the hijacked home PCs that actually send out junk mail.

The team used these machines to control a total of 75,869 hijacked machines and routed their own fake spam campaigns through them.

The response rate for this campaign was less than 0.00001%. This is far below the average of 2.15% reported by legitimate direct mail organisations. “Taken together, these conversions would have resulted in revenues of $2,731.88—a bit over $100 a day for the measurement period,” said the researchers.

Scaling this up to the full Storm network the researchers estimate (.pdf) that the controllers of the vast system are netting about $7,000 a day or $3.5m per year.

This suggests to me that it should be possible to cripple the zombie networks these creeps use to disseminate their crap. Couldn’t you send out a patch which effectively disabled the bot function?

During his presidential campaign, Barack Obama used technology to organize, communicate, and raise funds in innovative ways that gave him an advantage over opponents in both the primaries and the general election. It’s clear that Obama views tech as a powerful catalyst, and with the U.S. facing an unprecedented array of economic challenges, Obama will need to use technology to drive efficiency and institutional transformation.

A part of his policy platform, Obama has stated that he plans to hire the nation’s first chief technology officer (CTO) to play quarterback in driving these changes. A CTO is typically an organization’s top engineer and focuses on outward-facing technologies, but based on Obama’s policy statements he wants to use the national CTO position to:

Unite and lead the CIOs and CTOs of various federal agencies

As a result, Obama is going to need a visionary tech leader who can rally both technologists and standard Washington bureaucrats around a common purpose. It also wouldn’t hurt to bring in a big name — someone who already has a strong reputation that will translate into political capital.

The article lists 10 choices who are pretty damned good. Unsurprising, the #1 choice is Eric Schmidt who’s already declined in advance.

Which doesn’t mean that Obama couldn’t overcome his objections. Heading Google is a pretty snazzy gig. Helping your country enter the 21st Century – finally – can be tempting.

Evanston police are investigating why a 90-year-old woman, Margaret Bernstorff, was apparently living in a home with three dead siblings—one of which is believed to have died in the early 1980s.

How and when the siblings died and their ages were still being determined, said Evanston police Cmdr. Tom Guenther. The bodies were found Friday morning in a large home on the 1200 block of Judson Avenue, he said.

“We know we have three deceased people,” Guenther said. “We don’t know how their deaths occurred.”

The Bernstorff’s are believed to have died from natural causes, but autopsies are scheduled for Saturday. At least two of the bodies were skeletons and the third was very badly decomposed, according to authorities.

Guenther said police were called by a City of Evanston senior advocate who had an ongoing relationship with the woman.

Caroline Carlton, who lives across the street from the woman, said she last saw her neighbor passing out candy in the driveway on Halloween. Carlton said she had never been inside the house but from outside, it was well-maintained.

A drunken Jersey City councilman was arrested for urinating on a crowd of concertgoers from the balcony of a Washington nightclub.

Councilman Steven Lipski was caught relieving himself onto several revelers at the 9:30 Club during a concert by a Grateful Dead tribute band Friday night, club sources said.

“He was very drunk”…noting that it wasn’t the first time Lipski had caused a ruckus at the popular concert venue.

“We’ve dealt with this man before,” they added. “He’s never peed on anybody, but he gets really belligerent and drunk.”

Lipski, 44, was hauled out of the club about 9:50 p.m. after staffers spotted him in the act on the concert hall’s second-floor balcony and called the cops.

New Jersey really seems to specialize in “colorful” politicians. Or is there a more appropriate word?