Tong Zhiyuan, chairman of Chinese carmaker Huatai, said that because the purchasing power of most European families was affected by the economic crisis, some European countries have encouraged the purchase of low-emission cars, which is “favorable” for Chinese automakers…

In February, the German government introduced an incentive policy, which stipulates that car buyers can get 2,500 euros (around 3,200 U.S. dollars) in refunds from the state if they replace their old cars aged nine years or above.

[Folks in the U.S. tried to get something similar into the Stimulus Bill. Failed – courtesy of Congressional Republicans]

However, Fank Schnelle, a manager from Bremen-based BLG, a logistic giant providing solutions for Chinese carmakers Cherry, Brilliance Auto and Jili, was not so optimistic.

Schnelle said that Chinese carmakers still need to upgrade their competitiveness in order to enter the Western European market but it is possible for them share a stake in the market in the future.

I was involved with comparable import situations here in the States, decades ago. China has to realize – as the Brits and the French had to learn – that Japanese and German standards of excellence, design and fit shape the mold for the whole world.

At least they didn’t break out in the winter…

Six prisoners in Canada used nail clippers and other makeshift instruments to break out of prison. While fellow inmates blocked the guards’ view, they were able to dig through to an outer wall, which they then scaled to escape.

They were later recaptured and said they never expected to get away with it but the work gave them something to do.

A government report has made more than 20 recommendations to improve security at the prison in Saskatchewan…The report said investigators could accept inmates deceiving staff on a particular shift but not that “an entire corridor of inmates can deceive at least 87 corrections workers… and engineer an escape of this magnitude”.

The prisoners, four of whom faced murder charges, used modified nail clippers and other tools to remove a heating grill and chip away at the brickwork until they were able to smash through the wall.

The Saskatchewan government says they’re going to build a better jail. Sounds like they should hire guards with a higher IQ than the cons, eh?

Are Americans flunking science? A new national survey commissioned by the California Academy of Sciences and conducted by Harris Interactive® reveals that the U.S. public is unable to pass even a basic scientific literacy test.

Over the past few months, the American government has allocated hundreds of billions of dollars for economic bailout plans. While this spending may provide a short-term solution to the country’s economic woes, most analysts agree that the long-term solution must include a transition to a more knowledge-based economy, including a focus on science, which is now widely recognized as a major driver of innovation and industry. Despite its importance to economic growth, environmental protection, and global health and energy issues, scientific literacy is currently low among American adults. According to the national survey commissioned by the California Academy of Sciences:

Only 53% of adults know how long it takes for the Earth to revolve around the Sun.
Only 59% of adults know that the earliest humans and dinosaurs did not live at the same time.
Only 47% of adults can roughly approximate the percent of the Earth’s surface that is covered with water.*
Only 21% of adults answered all three questions correctly.

“There has never been a greater need for investment in scientific research and education,” said Academy Executive Director Dr. Gregory Farrington. “Many of the most pressing issues of our time—from global climate change to resource management and disease—can only be addressed with the help of science.”

Drop by the Academy’s website, look around, take the test. Think about prompting your peers and government to move on up to the 21st Century.

Radack plans to allow a few select bowhunters to begin targeting the thousands of feral pigs that live in George Bush Park and hopes to donate the meat to food banks, churches, homeless shelters or even needy individuals.

“If you could harness this, it could feed so many people it’s unbelievable,” Radack said…

Radack estimated there are between 10,000 and 15,000 hogs living in the park…The 7,800-acre park is part of the Barker Reservoir, which the federal government created in the 1940s to control flooding. Floods within the park typically help curb the hog population, but dry weather in recent years has allowed the herd to grow unabated.

Sounds like such a useful project that I’ll skip the jokes about Texas politicians.

Giant microwave ovens that can “cook” wood into charcoal could become our best tool in the fight against global warming, according to a leading British climate scientist.

Chris Turney, a professor of geography at the University of Exeter, said that by burying the charcoal produced from microwaved wood, the carbon dioxide absorbed by a tree as it grows can remain safely locked away for thousands of years. The technique could take out billions of tonnes of CO2 from the atmosphere every year.

Fast-growing trees such as pine could be “farmed” to act specifically as carbon traps — microwaved, buried and replaced with a fresh crop to do the same thing again.

{I’d suggest hybrid poplar would do a better job]

Turney has built a 5m-long prototype of his microwave, which fixes a tonne of CO2 for $65. He plans to launch his company, Carbonscape, in the UK this month to build the next generation of the machine, which he hopes will process more wood and cut costs further.

END_OF_DOCUMENT_TOKEN_TO_BE_REPLACED

Rosalio Reta sits at a table inside a Laredo Police Department interrogation room. A detective, sitting across the table, asks him how it all started.

“I thought I was Superman. I loved doing it, killing that first person,” Reta says on the videotape obtained by CNN. “They tried to take the gun away, but it was like taking candy from kid.”

Rosalio Reta and his friend, Gabriel Cardona, were members of a three-person cell of American teenagers working as cartel hit men in the United States, according to prosecutors. The third was arrested by Mexican authorities and stabbed to death in prison there three days later…

The detective sitting across the table from Reta and Cardona in those sessions is Robert Garcia. He’s a veteran of the Laredo Police Department and one of the few officers who has questioned the young men.

“One thing you wonder all the time: What made them this way?” Garcia told CNN. “They were just kids themselves, waiting around playing PlayStation or Xbox, waiting around for the order to be given…”

END_OF_DOCUMENT_TOKEN_TO_BE_REPLACED

The economic impact of global warming has been grossly underestimated and scientists must warn that inaction will spell disaster says top economist and climate change expert Nicholas Stern.

Stern told 2,000 climate scientists meeting in Copenhagen that they had failed to clearly tell humanity what it faces if global temperatures reach the upper range of forecasts made by the UN’s Intergovernmental Panel for Climate Change (IPCC).

“There has been lots of scientific information on 2.0 and 3.0 degrees Celsius (3.6 and 5.4 degrees Fahrenheit), but you have to tell people loudly and clearly just how difficult 4.0 or 5.0 would be,” he said.

Stern, whose 2006 Stern Review has become the benchmark for calculating the economic cost of tackling climate change, conceded that his report had also fallen short in assessing the potential consequences of global warming…

Katherine Richardson, head of the Danish government’s Commission on Climate Change Policy and a co-organiser of the meeting, agreed that scientists had not done a perfect job in getting the message out.

“Most of us have been trained as scientists to not get our hands dirty by talking to politicians. But we now realise that what we are dealing with is so complicated and urgent that we have to help to make sure the results are understood,” she told AFP.

Of course, if you confuse skepticism with sophistry in your own mind, please return to sitting on your thumb. 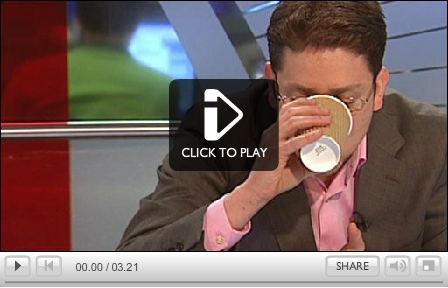 The tongue of the chief coffee taster for a worldwide chain of coffee shops has been insured for £10m ($13.95m).

Gennaro Pelliccia personally tastes a sample of each batch of raw coffee beans at its London plant before they are roasted and shipped to its stores. “My 18 years of experience enable me to distinguish between thousands of flavours,” he says…

“The taste buds of a Master of Coffee are as important as the vocal cords of a singer or the legs of a top model, and this is one of the biggest single insurance policies taken out for one person,” said a spokesman for Lloyd’s broker Glencairn Limited, which arranged the insurance cover.

Is there a comparable expert at condom factories?

A judge locked up killer Clifton Bloomfield for 195 years, but now the multiple murderer is out–on video–in a movie role he filmed between homicides.

Bloomfield described himself as trustworthy and reliable a year and a half ago when casting director David Córdova was auditioning extras for the Sony Pictures movie ” Felon ” starring Steven Dorff and New Mexico resident Val Kilmer.

And he got the movie role he was seeking playing a convict in a violent prison drama. He already had killed two people, and a month after “Felon” wrapped he resumed his real-life killing spree.

“We’re expecting actors to come to our casting calls,” Córdova told KRQE News 13. “I’m not expecting the real thing to come through. I don’t think anybody else was actually aware that we had cast a mass murderer on the film.”

Córdova says he can’t afford to background check the thousands of background actors he uses but he wishes he could.

Now serving five life sentences Bloomfield won’t be auditioning for any more movies after being cast in the permanent role of a prison inmate.

Unless, of course, someone in the prison system does something really stupid like let him out by mistake. It happens here.

At 1:09 one afternoon last year, 90 metal rods slid into the cores of the two nuclear reactors at Turkey Point, part of an automatic shutdown that had been triggered by a utility worker’s blunder moments earlier at a substation miles away. A million customers lost power.

Florida Power & Light executives ordered that the reactors be back online within 12 hours, according to court documents. The plant’s top nuclear operator, David Hoffman, said that would be dangerous. When FPL executives disagreed with him, he walked out at 8 p.m., refusing to participate in actions he felt were unsafe.

At 11:49 that night, Feb. 26, 2008, he submitted a heated resignation letter, blasting FPL for constantly putting cost savings ahead of safety and creating a horrible morale problem. ”People are not valued and are treated like equipment and numbers,” Hoffman wrote.

Hoffman’s charge offers a rare insight into safety complaints made by nuclear workers, who are often forbidden by contract from saying anything negative about their bosses. The information came to light because FPL is suing him for the return of a bonus, and he’s charging in a countersuit that the utility is improperly trying to silence his complaints about safety…

The utility insists that Turkey Point is operated safely and that the company is working hard to retain employees.

Well, there’s one they didn’t retain.