Two local colleges have joined forces with NASA in an effort to create a sustainable community that will allow for education and research at Moffett Field.

The University of California-Santa Cruz and the Foothill-De Anza Community College announced that they have joined NASA Ames Research Center to create an educational opportunity on 75 acres of land in the NASA Research Park.

The goal of the partnership to create an environmentally sustainable community that will prepare the workforce of the future while also allowing for technological research, UCSC Chancellor George Blumenthal said…

Yeah, I know it’s just a press release pumping up the joint venture; but, it sounds like enough fun that I’d recommend it to students. Get all of this crowd together with the NASA Ames folks – and something truly useful might come of it.

Toss in Carnegie-Mellon and I might consider coming out of retirement to sell whatever they invent. 🙂

Click on photo for another view of Irish/Japanese woofing 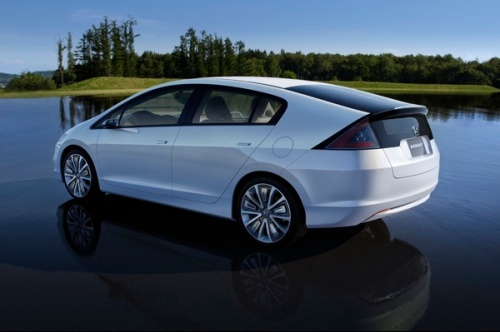 The timing may be right for a hybrid car with a suggested retail price starting under $20,000 — the first in the American market in that price range. That new model also comes as car sales decline along with gasoline prices, which may diminish consumer interest in greener transportation.

The American Honda Motor Company is taking a big risk on the potential appeal of a more mainstream hybrid. The automaker plans to introduce the 2010 Honda Insight on March 24, with sticker prices of $19,800 to $23,100 (plus destination charges).

A campaign for the Insight, with a budget estimated at $50 million to $75 million, is scheduled to start on Monday. The campaign is by RPA in Santa Monica, California The ads present the Insight as a democratic car — small “d,” that is, as opposed to, say, President Barack Obama’s souped-up Cadillac limousine — because it is priced to be affordable.

“You know who could use a car like this?” asks the headline of a print advertisement. “Everyone.”

Sounds like a smart campaign. I don’t now if people are ready to spend what hard-earned bucks they have on a new car. Right now.

But, Honda generally is as smart as Toyota – which means light years ahead of the Big 3. Perfectly capable of establishing a perception ahead of demand – which then places them in a position of advantage when consumers decide to act.

Not living in Cleveland, I usually wouldn’t feel called upon to note a “local” issue. I think this is a sign of the times – and worth covering for that reason.

The diocese declined to publicly release the entire list until today, when parishes without Saturday Masses will learn their fates.

The entire list…outlines a plan for 52 fewer parishes by next year. Twenty-nine of the diocese’s 224 parishes will close, while 41 will merge, creating 18 new parishes. Affected churches must close by July 1, 2010…

The downsizing, said to be the first in the history of the 162-year-old diocese, is due to a shortage of priests, changing demographics and wanting collection baskets, the bishop has said.

“We’re just too big for the number of people that we have,” Lennon said in a recent interview, noting that the number of practicing Catholics in the diocese dwindled from 1 million 50 years ago to less than 800,000 today…

No gloating. Even though I consider organized religion – and philosophical idealism for the erudite – to be a social form serving only a leftover gene or two about as useful as the appendix, each step in the inevitable diminishing superstructure will be difficult for those folks unaccustomed to change, unwilling to learn and grow into a changing society.

U.S. Representative Barney Frank, chairman of the House Financial Services Committee, says the government needs to determine if millions in employee bonuses at American International Group can be recovered.

“We need to find out whether these bonuses are legally recoverable,” Frank, a Democrat, told the “Fox News Sunday” program, adding that the timing of the company’s commitment to make the awards to its employees was important.

Embattled insurer AIG, which has received three government bailouts totaling $180 billion, had promised to pay about $1 billion in retention bonuses over a period of several years, half of which has already been paid…

About half of the $1 billion was due to be paid to staff of AIG’s main insurance businesses and the rest to employees of the largely unregulated AIG Financial Products.

Give ’em a choice, Barney! They can return the bonuses – or work it off building roads, repairing bridges. You know. Doing something that puts blisters somewhere other than their lazy butts.

Police say the number of republican dissidents trying to wreck the Northern Ireland peace process is about 300.

Chief Constable Sir Hugh Orde told the BBC that intelligence clearly showed the numbers intent on violence was a tiny proportion of the population. His comments came after three members of the security forces were killed in two separate attacks one week ago.

Nine people have now been arrested over the murders of a policeman in Craigavon and two soldiers in Antrim.

Det Supt Farrar said the killers had made an unsuccessful attempt to burn-out the getaway car after the murders. “As a result, we now have a number of forensic opportunities that we are exploring,” he said.

Sir Hugh told BBC1’s Andrew Marr Show: “Of course, the threat is very dangerous, that’s been evidenced in the last week, but it’s a very small group. “Three hundred people in a population of 1.7 million people puts it in perspective but it’s a threat we take seriously.

A small number of nutballs can still endanger very many law-abiding citizens. The KKK proved that in America.

As long as unity in peaceful political processes can be maintained by the major parties, life and change will proceed in all of Ireland.

Pandemonium erupted outside of an “America’s Next Top Model” casting call in midtown Saturday when an overheating car triggered a stampede of catwalk-craving cuties.

Screaming as they ran for their lives, hundreds of hotties in heels toppled over barricades along W. 55th St. after several people in the crowd started yelling, “There’s a bomb!”

By the time the model madness ended, two women were hospitalized and two others and one man were busted for inciting a riot, authorities said.

Seems to be about as well-managed as a bull in a china shop. 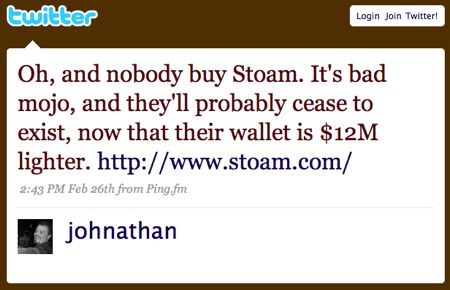 A building materials company and its owner have appealed a $12.6 million verdict against them, alleging that a juror was posting related messages on Twitter.com while hearing the case.

The motion filed Thursday seeking a new trial claims the juror sent eight messages — or “tweets” — to the micro-blogging Web site via his cellular phone. One read in part: “oh and nobody buy Stoam. Its bad mojo and they’ll probably cease to Exist, now that their wallet is 12m lighter.”

Another describing what “Juror Jonathan” did today, read: “I just gave away TWELVE MILLION DOLLARS of somebody else’s money.”

The motion filed by the lawyer for Russell Wright and his company, Stoam Holdings, alleges the juror researched the case and communicated with others outside the jury. Wright did not appear in court when the case was heard in Washington County in late February.

A new message posted Friday by a Johnathan Powell of Fayetteville read: “Well, I’m off to see a judge. Hope they don’t lock me under the jail, and forget about me for four days.”

Har! The idiot has responded to – and offered up – enough messages already, hasn’t he?

A Kentucky man is accused of persuading an 11-year-old Humble girl to send him nude photos of herself while the pair played video games online.

Anthony Scott O’Shea, 24, of Somerset, Ky., has been charged with promotion of child pornography, online solicitation of a minor and sexual performance of a child. He will soon be transferred to Houston, said Sgt. Gary Spurger of the Harris County Precinct 4 Constable’s Office. The girl sent the man photos over the course of several weeks as they played games online with their PlayStation 3 consoles in December, Spurger said.

“She realized what she had done and felt bad about it and told her parents,” said Spurger, who investigated the case and coordinated the man’s arrest with Kentucky officials.

Uh, so her parents were doing a great job of staying in touch with their daughter’s online life…

The Precinct 4 Constable’s Office routinely investigates child pornography cases, but this is the first case Spurger said he’s aware of where the online predator contacted a child through a game console’s online network.

“This is another venue these guys are getting to use now that hasn’t been seen before,” Spurger said. According to court documents, the girl “performed” for the man using a Web camera.

She said she met O’Shea playing the game Warhawk and that he had used the screen name “Thunder-kid.”

Authorities said they also discovered that O’Shea had distributed the girl’s photos to other people.

There’s another surprise. Sheesh! Would she be dumb enough to hand around snaps on the playground at school?