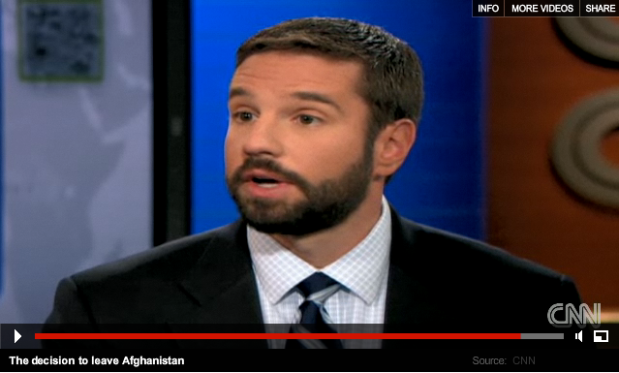 A State Department employee who resigned last month in protest over America’s war in Afghanistan said he has received an outpouring of support from Afghan-Americans and U.S. active-duty military.

The 36-year-old former Marine Corps captain resigned on September 10 over what he termed a “cavalier, politically expedient and Pollyannaish misadventure.” Since then, even active-duty military have supported his decision, he said on CNN’s “Fareed Zakaria GPS”.

“I have received many many e-mails from active-duty military and some guys who just separated from the service,” Hoh said. “Some guys are here in the States. I’ve gotten many e-mails from guys in Afghanistan. Some are people I know. But a lot are people I do not know. Men and women who are saying, ‘Thanks for doing this. Keep it up. We don’t know why we’re here. We’re not sure why we’re taking these casualties. We don’t know what it’s accomplishing.'”

In his letter, the senior civilian representative in Zabul Province, Afghanistan, said he was resigning because “I fail to see the value or worth in continued U.S. casualties or expenditures of resources in support of the Afghan government in what is, truly, a 35-year-old civil war.” He concluded the letter by saying that he had “lost confidence” that the “dead have sacrificed for a purpose worthy of futures lost, love vanished and promised dreams unkept.”

Since Obama’s election I have been willing to re-examine the Afghan War in light of the potential of new and intelligent leadership. The leaders are there – especially Gen. McChrystal – and I think that absent the worst political pressures, President Obama is capable of making a decision on the war that will bear fruit.

But, that culture doesn’t exist in a vacuum. Republicans, chickenhawk Dems, tea-bagger war-lovers rally round the flag of self-destruction every day. I fear that Obama will accept a consensus of ignorance rather than lead us to daylight.

I agonized over my own opinion. After all, I have a great deal of interest in military history, strategy and tactics – as regulars here well know. I would have had confidence in Stanley McChrystal if someone of his caliber was leading the fray 8 years ago instead of being dropped in to pull the Bush/Rumsfeld chestnuts out of the fire less than 8 months ago.

Matthew Hoh has convinced me. I would hope we work to support the “valley defence” and continue to train soldiers and police officers to defend what passes for human rights in Afghanistan. I hope we could continue to build an intelligence operation in the region capable of supporting both Pakistan and Afghan efforts to terminate the gangsters and warlords pretending to be religious seers.

I hope we finish getting the hell out of Iraq, remove the bulk of offensive troops from Afghanistan – and while we’re at it, let’s bring the rest of our military home from around the world and quit throwing good money after bad by retaining a Cold War infrastructure that is past due on closing down.

One thought on “Support grows for Matthew Hoh, leaving the Afghan War”