The Mormon Church has been a target of vituperation by some gay rights groups because of its active opposition to same-sex marriage. Now, the church was being praised by gay rights activists in Salt Lake City, citadel of the Mormon world, for its open support of a local ordinance banning discrimination against gay men and lesbians in housing and employment.

The ordinance, which passed unanimously, made Salt Lake the first city in Utah to offer such protections. While the measure probably had majority backing on the seven-member City Council anyway, the church’s support was seen by gay activists as a thunderclap that would resonate across the state and in the overwhelmingly Mormon legislature, where even subtle shifts in church positions on social issues can swing votes and sentiments.

“It’s the most progressive and inclusive statement that the church has made on these issues,” said Will Carlson, the manager of public policy at Equality Utah, the state’s largest gay rights group. “What they’ve said here is huge, in protecting residents in other municipalities, and statewide…”

“Across America and around the world, diverse communities such as ours are wrestling with complex social and moral questions,” Michael R. Otterson, a church spokesman, said in a statement to the City Council. “The issues before you tonight are the right of people to have a roof over their heads and the right to work without being discriminated against.”

Overdue – and welcome to the struggle for civil rights.

One that didn’t miss

A newly discovered asteroid designated 2009 VA, which is only about 7 meters in size, passed about 2 Earth radii (14,000 km) from the Earth’s surface Nov. 6 at around 16:30 EST. This is the third-closest known (non-impacting) Earth approach on record for a cataloged asteroid…

On average, objects the size of 2009 VA pass this close about twice per year and impact Earth about once every 5 years.

Asteroid 2009 VA was discovered by the Catalina Sky Survey about 15 hours before the close approach, and was quickly identified by the Minor Planet Center in Cambridge MA as an object that would soon pass very close to the Earth. JPL’s Near-Earth Object Program Office also computed an orbit solution for this object, and determined that it was not headed for an impact.

Doctors in Iraq’s war-ravaged enclave of Falluja are dealing with up to 15 times as many chronic deformities in infants and a spike in early life cancers that may be linked to toxic materials left over from the fighting.

The extraordinary rise in birth defects has crystallised over recent months as specialists working in Falluja’s over-stretched health system have started compiling detailed clinical records of all babies born.

Neurologists and obstetricians in the city interviewed by the Guardian say the rise in birth defects – which include a baby born with two heads, babies with multiple tumours, and others with nervous system problems – are unprecedented and at present unexplainable.

Other health officials are also starting to focus on possible reasons, chief among them potential chemical or radiation poisonings. Abnormal clusters of infant tumours have also been repeatedly cited in Basra and Najaf – areas that have in the past also been intense battle zones where modern munitions have been heavily used.

Falluja was the scene of the only two setpiece battles that followed the US-led invasion. Twice in 2004, US marines and infantry units were engaged in heavy fighting with Sunni militia groups who had aligned with former Ba’athists and Iraqi army elements.

The first battle was fought to find those responsible for the deaths of four Blackwater private security contractors working for the US. The city was bombarded heavily by American artillery and fighter jets. Controversial weaponry was used, including white phosphorus, which the US government admitted deploying.

Having supported efforts to prevent testing of depleted uranium projectiles here in New Mexico, knowing something of the residue from radioactive pyrophoric metals, I’m not surprised by any of this.

Presumably, most of you won’t be surprised by the protestations of innocence and patriotic rationales that will flow from the Pentagon, politicians and other pimps of our military-industrial complex. Those who authorized most of this, those who continue to do so, will not relent until we stop them, folks.

The plant, west of Yuma, was essentially completed in 1992. Initial operational testing was conducted at about one-third capacity until early 1993, when it was stopped after flooding on the Gila River damaged a portion of the irrigation drainage canal…

“Drought, population growth and the continuing need for water in the Southwest have increased the demand on the Colorado River,” Lorri Gray-Lee said. “This collaborative undertaking is one more example of the ongoing state-federal partnership effort to address the drought’s impacts, conserve and stretch the river’s water supply and identify and secure additional supplies…”

About 21,700 acre-feet of desalted water will be produced during the pilot run. This water will be combined with 7,300 acre-feet of untreated irrigation drainage water and the total amount – 29,000 acre-feet – will be discharged into the Colorado River and included in deliveries to Mexico as required by treaty…

Construction of the desalting plant was authorized by the Colorado River Basin Salinity Control Act of 1974. Its purpose was to desalt irrigation drainage water flows from the Wellton-Mohawk Irrigation and Drainage District so a portion of that water could be included in treaty-required deliveries of Colorado River water to Mexico. Since 1977, this drainage water has been conveyed from the district to the Cienega, bypassing the desalting plant.

At this time, Reclamation is not proposing to operate the plant beyond the pilot run, Gray-Lee said. “Any decision about the plant’s future will be made after the pilot run is completed or terminated…

Perish the thought you should hurry the process. Follow usual political standards and wait until water has run out in the region for a decade or two – so you won’t affront know-nothing skeptics or this week’s hate-the-furriner crowd.

A deadly outbreak of E. coli has been traced to a large producer of ground beef that stopped testing its ingredients years ago under pressure from beef suppliers.

A facility in Ashville, N.Y., owned by the company, AFA Foods, recalled more than 500,000 pounds of ground beef on Oct. 31 after it was linked to an outbreak that has killed two people and sickened an estimated 500 others.

The outbreak has fueled a growing concern among grocers that not enough is being done to protect their customers. Trader Joe’s, an upscale chain, said this week that it had stopped buying ground beef from the New York plant and was initiating discussions with other suppliers to have grinders test the trimmings they use in making ground beef.

Although Trader Joe’s remains one of the two markets where our family regularly shops, we’ve halted purchases of ground beef there – in favor of Whole Foods. [1] We had some extra tummy rumblings after consuming the occasional hamburger from their product and [2] they brought in some ground beef from Australia which looked and tasted like there were some significant extras – like bone and gristle – that we didn’t ask for.

The United States Department of Agriculture, which banned the deadly E. coli strain known as 0157:H7 in 1994, has encouraged — but does not require — meat companies to test their products for the pathogen. In the absence of such a rule, meat companies have adopted varied practices.

Which means getting away with every cost-cutting measure possible.

The Department of Agriculture has been run at the beck and call of food producers for decades. I doubt if significant backbone could be found onboard to stand up to the legal mouthpieces – and political flunkies in Congress – who actually define the mediocre standards ruling what we consume in this land. 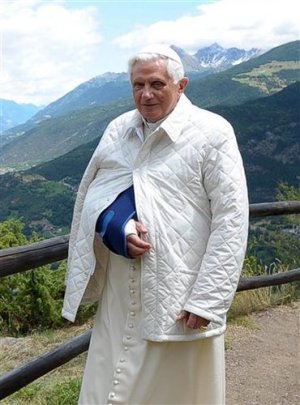 It is a subject that would make most governments blush, but officials in the Spanish region of Extremadura have launched a major programme to encourage what could be described as a more hands-on approach to sexuality.

“Pleasure is in your own hands” is the slogan of a campaign that has sparked political controversy and challenges traditional Roman Catholic views on people having sex, even on their own, for non-reproductive reasons…

“They are interfering with the right of parents to educate their own children about a matter as important as their sexuality,” agreed the conservative Confederation of Fathers and Mothers of Schoolchildren.

Officials from the neighbouring region of Andalucia have expressed an interest in copying the programme.

Unemployed, eh? Lots of time on their hands, too.

Apple announced it plans to open 40 to 50 retail stores next year as the consumer electronics giant expands its reach to customers.

More than half of the new stores will be outside the United States, with new outlets planned in London, Paris and two in Shanghai.

Speaking ahead of a store opening in New York, Ron Johnson, Apple’s senior vice president of retail, said the company expects the holiday selling season to be a good one.

The stores posted revenue of $1.87 billion in the quarter, their highest level ever and up 9 percent from a year earlier.

Annual revenue per store is now around $26 million, Johnson said, or roughly $4,300 per square foot…

Asked about Microsoft, Johnson said, “retailing is hard … it’s nice to have a 10-year head start.”

Retail is very, very hard. A great deal of my business career was in wholesale and I could bore you to tears with the skills required to make that a success. Multiply the difficulty factor by 10 or more – for retail.

Disclaimer: Every few years I buy AAPL. Last couple times I sold it after I made 100%. I bought it last at $89 and I think I’ll hang onto it for a spell, this time.