It’s been less than a month since Simon Hackett set something of a electric vehicle distance record in his Tesla Roadster, driving 501 km across the hot and flat Australian outback with the windows up and the air-con off. Now comes news that the dedicated enthusiasts of the Japan EV Club have decidedly bested that mark and are seeking Guinness Book of Records status for their own 555.6 km run. Club founder Tadashi Tateuchi battled terrible traffic and hilly Japanese terrain as he drove a super-sweet electrified Daihatsu Mira Van from Tokyo to Osaka.

The nicest part, of course, is that records like this will be surpassed on a regular basis as we continue to move towards a range of sensible personal transportation.

The Billionaires Club of India almost doubled from last year to 54 members up from 27, aided by are bounding stock market that gained two-thirds in the past year and an economy growing at six percent, says the Forbes Asia magazine.

The country’s 100 richest people have a combined net worth of 276 billion U.S. dollars, which was almost a quarter of the country’s Gross Domestic Product (GDP)…

Mukesh Ambani, heading Reliance Industries Limited, is once again the wealthiest person in India with his net worth increasing by 54 percent to 32 billion U.S. dollars from nearly 21 billion last year.

India Editor of Forbes Asia Naazneen Karmali said in a statement, “Happy days are definitely back again for India’s richest. This year’s list shows yet again that when conditions in the financial markets and the economy are right, India has the scale and resources to produce billionaires faster than most of the countries on earth.”

Anyone wondering if the politics of India are offering the same growth in income to the remainder of the population? That’s nothing hard-nosed – just a reminder from a distant friend. When you’re rocking and rolling down the Yellow Brick Road, sometimes you forget about the streetcleaners.

Woolly mammoths and other large, lumbering beasts faced extinction long before early humans perfected their skills as spearmakers, scientists say. The prehistoric giants began their precipitous decline nearly 2,000 years before our ancestors turned stone fragments into sophisticated spearpoints at the end of the last ice age…

“Some people thought humans arrived and decimated the populations of these animals in a few hundred years, but what we’ve found is not consistent with that rapid ‘blitzkrieg’ overkill of large animals,” said Jacquelyn Gill…who led the research team…

Specifically, the scientists measured levels of a fungus that is known to thrive in the excrement of giant herbivorous mammals and nowhere else. They reasoned that more fungal spores meant more dung, which in turn reflected a larger population of roaming mammals. The sediments also held ancient pollen and charcoal dust, which gave the team clues about the predominant plant life and frequency of wildfires.

Writing the US journal Science, the researchers describe how the amount of mammal dung started to fall around 14,800 years ago, long before advanced spearheads became commonplace. The animals had been almost completely wiped out a thousand years later…

The study is among the first to reveal the environmental consequences of such a catastrophic decline in species. Pollen and charcoal recovered from the sediment cores show that wildfires became far more common and that the variety of plant life changed dramatically, as the nutritious and easily digestible trees and shrubs that were eaten by the mammals grew back.

This more gradual decline appears to have been an understandable result of changing food sources on the tundra. We just jumped in at the end and finished the critters off.

If you’ve ever had to spend a lot of money on antivirus software, you’d be forgiven for wanting to take Dr Fred Cohen aside for, to put it politely, a few choice words.

But although Dr Cohen is responsible for creating the first ever computer virus some 26 years ago, his pioneering research has in fact led the way in protecting computers from the threats that surfaced in the years to come…

After a neighbouring university created a Trojan horse – which allowed hackers to gain access to a machine – Dr Cohen realised that the Trojan could be programmed to duplicate itself.

This is the proverbial lightbulb going off.

Dr Cohen believes that genuine research into possible threats has not happened for quite some time.

“As far as I can tell, somewhere around the late eighties or early nineties was the end of the real research related to computer viruses.

“There are businesses that want to make sure they keep making money by having cures that fix the last one, but not the next one.”

Ebook readers are arguably coming of age, but don’t assume e-ink – and the push to produce color e-ink panels – have won the game quite yet. SlashGear met up with Qualcomm’s mirasol team to discuss their latest display news, and while you might remember the technology from their early 1.1-inch single-color panels, they’re now showing off a 5.7-inch display capable of full color and video playback, with minimal impact on battery life. They’ve set themselves the target of having color ebook readers with mirasol panels on the market by the latter part of 2010, and are working with OEMs now to achieve that.

Mirasol borrows the same elements that allow a butterfly’s iridescent wings to shimmer, using tiny flexible membranes that react to electrical charges, overlaid onto a mirrored surface. Light reflected back out through those membranes is refracted so that interfering wavelengths create colors, and because the membranes used are bistable, once they have been set to display a certain color they require virtually no power to maintain it, only if it needs to be changed. The system also needs no color filters, no strong backlighting to be visible in direct sunlight and no polarizing lenses.

It’s important to point out that the device you see here is merely a mock-up the mirasol team have put together, and while non-functional overall the 5.7-inch display panel is from their fab plant and an actual, working unit, its bistable pixels locked into a color image. Qualcomm are working with multiple OEMs – the names of which they wouldn’t disclose – on a variety of ebook reader devices, and while they couldn’t confirm any particular form-factors, they did say there are plans for units with and without QWERTY keyboards, together with touchscreen and non-touchscreen models.

Where mirasol shows its strength is in battery performance. A standard ebook reader – such as the Kindle – could last for roughly 20-percent longer if its monochrome e-ink display was switched for a mirasol panel, assuming the same sort of use. As the mirasol team explained, however, once you start pushing traditional e-ink panel refresh rates, up to the point you can display smooth video, and introduce color, power draw can actual go beyond that of a regular LCD display. A color e-ink video-capable Kindle would last roughly a day using the same battery; meanwhile the same unit with a mirasol panel would last around a week.

I think this is a more radical jump in display technology than OLED. Essentially, you’re able to achieve bright, colorful images with NO backlight. And the colors become more intense when you take the screen outdoors – the opposite of what we experience with LCDs. While reducing power consumption.

I guess we’ll soon learn if the saw about “e-readers will become popular when they get a color screen” – means anything? 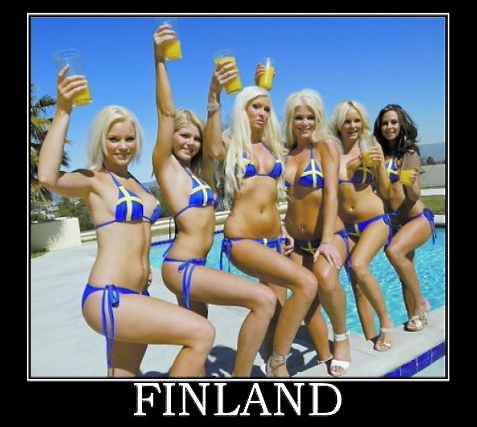 Breast implants, hair replacement surgery or a face-lift performed by the Nordstroem Hospital in Helsinki are among the newest offerings in the carrier’s Finnair Plus loyalty service, according to the program’s Web site…

About 1.3 million flyers are enrolled in Finnair’s loyalty program, Tuomainen said. Earning the 3.18 million points for breast augmentation surgery requires 120 round-trip, business-class flights between Helsinki and New York, according to a points table on Finnair’s Web site. Miles earned with the airline are valid for five years.

Finnair, which added the cosmetic surgery service about a month ago, is in talks with medical practices to offer other health care services, Tuomainen said. Points can also be combined with cash and used for services ranging from restaurants and clubs to car rentals and hotels. Frequent flyers use three-fourths of all points for flights, Tuomainen said.

Uh, OK. Maybe this is the beginning of a radical new direction in marketing?

The man who captained the Maersk Alabama as it repelled a pirate attack off Somalia this week was a classmate and friend of the officer at its helm when the ship was hijacked in the same area six months ago.

Richard Phillips was held for five days in a lifeboat until he was rescued by the U.S. Navy after the April 8 attack. Paul Rochford was the captain today, said the president of the Massachusetts Maritime Academy, which counts them among the class of 1979.

“It’s not unusual that the ship got approached twice by pirates, but it is ironic that they sat next to each other for four years and knew each other,” said Admiral Richard Gurnon, head of the Buzzards Bay, Massachusetts, school. “It is great that the lessons were learned.”

A security team aboard the Alabama thwarted today’s attack using small-arms fire and other maneuvers, the U.S. Fifth Fleet said in a statement from Bahrain. It may be the first time a merchant ship has fought off Somali pirates by using armed guards, Cyrus Mody, a manager at the International Maritime Bureau in London, said by phone today.

“He is everything you would expect from a master mariner who has been at sea for 30 years,” Gurnon said. “The deck officers of the class of 1979 are earning their weight in ink.”

Gurnon…said the academy has previously offered a security course that includes how to deal with pirates. Since the April attack, it offers firearms instruction, which is always oversubscribed…

While the world’s navies are patrolling the area to help deter pirates, that doesn’t mean attacks will stop, Gurnon said.

“We have armed police officers patrolling our streets, and yet there are still burglars and they still manage to hit houses every night,” Gurnon said. “It is the exact same thing with maritime pirates. The only difference is they are in the kidnap business.”

Still appropriate to note that armed self-defense is a reasonable response to piracy.

Former world champion Kimi Raikkonen will not be racing in Formula 1 next year after failing to find a drive.

The 30-year-old Finn had been trying to do a deal with McLaren but they would not offer him the salary he wanted, his manager David Robertson told BBC Sport.

“They couldn’t afford him,” Robertson said. “It wasn’t in his interests to race for what they were offering so he’s going to go rallying instead…”

Raikkonen is trying to find a drive in the world rally championship, Roberston said, although nothing had yet been sorted out.

He made his world rally debut on his home Rally Finland last August, setting competitive times before crashing out…

Asked how Raikkonen felt about the temporary end of an F1 career that started in 2001 and in which he won 18 grands prix, Robertson said: “He’s one of those guys who moves on quickly – he just said ‘now we concentrate on rallying’.

We didn’t watch much WRC this year. If Kimi is driving for someone next year – we’ll watch.