The Beruti register office in the Palermo district of Buenos Aires will never have witnessed a marriage like it. On Tuesday, Alex Freyre and José María Di Bello, who met three years ago at a conference on HIV, will make history and divide a continent as they become Latin America’s first gay married couple.

The ceremony will be a tribute to their determination as well as their love for each other, after a bitter three-year campaign which has divided a city, outraged Argentina’s powerful Roman Catholic church and overturned the constitution…

Not surprisingly, the marriage is already being hailed by equality activists as a significant triumph against the odds in a traditionally macho society. Argentina – and Latin America in general – is not known for a tolerance of sexual diversity, and violence against gays is an everyday occurrence.

“This marriage is bigger than José María and I,” Freyre told the Observer. “It is a victory for all who face prejudice and discrimination across Latin America and the Caribbean. It is proof that at last the grip of the Catholic church is slipping across Latin America, the system that has kept gay communities silent and fearful is crumbling. What is happening on Tuesday is a strike against those attitudes that have repressed sexual rights across this continent for too long.”

I’m “almost” inclined to predict that once Latin America gets a few dozen ordinary marriages accomplished, the populace will set aside one more outdated edict from the Catholic Church and let people go about living ordinary lives.

“Almost”, but not quite.

UPDATE: A judge is trying to postpone the marriage. The couple will show up at the registry office, anyway, Tuesday morning.

UPDATE: Well, it took another month; but, this young couple finally got married. There are judges everywhere in the world who must think they are Republicans. Hateful bastards who get some pleasure from delaying someone else’s rights – even if it’s just for weeks – trying to hold back civi rights for all.

Swiss voters have approved a proposal to ban the construction of minarets, after a rightwing campaign that labelled the mosque towers as symbols of militant Islam, projections by a respected polling institute show.

The nationalist Swiss People’s party (SPP) described minarets, the distinctive spires used in most countries for calls to prayer, as symbols of rising Muslim political and religious power that could eventually turn Switzerland into an Islamic nation.

Which is fracking absurd.

Muslims make up about 6% of Switzerland’s 7.5 million people, many of them refugees from the Yugoslav wars of the 1990s. Fewer than 13% [of those] practice their religion, the government says, and Swiss mosques do not broadcast the call to prayer outside their buildings…

The move by the SPP, the country’s largest party in terms of popular support and membership in parliament, is part of a broader European backlash against a growing Muslim population. It has stirred fears of violent reactions in Muslim countries and an economically disastrous boycott by wealthy Muslims who bank, shop and holiday in Switzerland…

If there is a boycott – and I would support it – the Swiss would be getting what they deserve. Let their government collect taxes on purity!

The SPP has campaigned against immigrants in previous years – mainly unsuccessfully – with campaign posters showing white sheep kicking a black sheep off the Swiss flag and another with brown hands grabbing eagerly for Swiss passports.

Bigotry can still be counted upon to turn out votes from ignorant fear-filled people. In any country. Though the Swiss hold more than one inauspicious record for silliness like this. After all, they didn’t allow women to vote in national elections until after 1971.

Denis Avey is a remarkable man by any measure. A courageous and determined soldier in World War II, he was captured by the Germans and imprisoned in a camp connected to the Germans’ largest concentration camp, Auschwitz.

But his actions while in the camp – which he has never spoken about until now – are truly extraordinary. When millions would have done anything to get out, Mr Avey repeatedly smuggled himself into the camp.

Now 91 and living in Derbyshire, he says he wanted to witness what was going on inside and find out the truth about the gas chambers, so he could tell others. He knows he took “a hell of a chance”…

“You wouldn’t think anyone would think or do that, but that is how I was. I had red hair and a temperament to match. Nothing would stop me.”

He arranged to swap for one night at a time with a Jewish inmate he had come to trust. He exchanged his uniform for the filthy, stripy garments the man had to wear. For the Auschwitz inmate it meant valuable food and rest in the British camp, while for Denis it was a chance to gather facts on the inside…

He talked to Jewish prisoners but says they rarely spoke of their previous life, instead they were focused on the hell they were living and the work they were forced to do in factories outside the camp…

“There were nearly three million human beings worked to death in different factories,” says Mr Avey. “They knew at that rate they’d last about five months.

He says he would ask where people he’d met previously had gone and he would be told they’d “gone up the chimney”.

Part of the historic record so rarely taught in detail, nowadays.

I’ve known a few survivors of Auschwitz. Been there once. Knew one pair of survivors who met inside the concentration camp – and married afterwards.

I’ve known soldiers with the courage to travel beyond the boundaries of humanity like Avey – and spent the remainder of their lives surviving what now is called PTSD. My dearest heroes.

RTFA. Imagine a little of what Denis Avey saw and experienced.

Australian scientists have said they are hoping to breed sheep that burp less as part of efforts to tackle climate change.

The scientists have been trying to identify a genetic link that causes some sheep to belch less than others. Burping is a far greater cause of emissions in sheep than flatulence, they say.

About 16% of Australia’s greenhouse emissions come from agriculture, says the department of climate change.

Australia’s Sheep Cooperative Research Council says 66% of agricultural emissions are released as methane from the gut of livestock.

“Ninety per cent of the methane that sheep and cattle and goats produce comes from the rumen, and that’s burped out,” John Goopy from the New South Wales Department of Industry and Investment told ABC.

“Not much goes behind – that’s horses.” [And cows]

The scientists’ goal in the long term is to breed sheep that produce less methane, which produces many times more global warming than carbon dioxide.

Well, we grow burpless peppers in New Mexico. Seems to me we could come up with a burpless sheep.

At left, Jesus appears eager and willing to do more laundry. At right, woman
shows us her iron while Jesus proudly looks on.

“I didn’t panic,” [Mary Jo] Coady told the Herald. “I was carrying the laundry, looked down at the iron and there was the image of Jesus. I picked it up and asked my daughters to take a look at it to make sure I wasn’t crazy.”…

My faith was down, but seeing this made me think, wow, Jesus is there.”

To me, it looks more like René Descartes. But I’m probably just in denial. 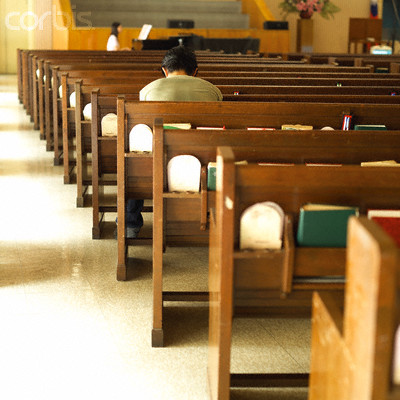 The Church of England is facing the loss of as many as one in ten paid clergy in the next five years and internal documents seen by The Times admit that the traditional model of a vicar in every parish is over.

The credit crunch and a pension funding crisis have left dioceses facing massive restructuring programmes. Church statistics show that between 2000 and 2013 stipendiary or paid clergy numbers will have fallen by nearly a quarter…

Jobs will instead be filled by unpaid part-timers, giving rise to fears about the quality of parish ministry. Combined with a big reduction in churchgoing, the figures will add weight to the campaign for disestablishment…

About one in sixty people worships with the Church of England on an average Sunday. This is projected to drop to less than one in 600 by 2050. The average age of a British Anglican worshipper was 37 in 1980, but is expected to rise to 67 by 2050.

Terry Sanderson, of the National Secular Society, said: “Such numbers remove the last vestige of justification for the Church’s establishment. It is no longer representative of the nation and will become progressively less able to fulfil its claimed nationwide service.

“Establishment gives bishops significant power and this is simply illegitimate and undemocratic. It is quite clear that the Church of England is, to all extents and purposes, finished.”

I hope churches in the United States catch up to their role model across the pond. I’d hate to see a crumbling church-gap for the whole world to see.

Vanuatu Prime Minister Edward Natapei reportedly lost his post in the Pacific island nation for not providing a written excuse for political absences.

The BBC reported Friday that under Vanuatu law, Natapei was required to give up his position and forfeit his parliamentary seat if he couldn’t provide a written explanation for missing three consecutive parliamentary sittings.

Natapei, who missed the sessions while attending a Commonwealth of Nations summit in Trinidad and Tobago, failed to notify the parliamentary speaker of the cause of his absences.

Members of the Vanuatu Parliament will likely vote on a new prime minister next week, the BBC reported. A by-election is also expected to take place for Natapei’s parliamentary seat.