A group of suspected pirates was captured after attacking a U.S. Navy frigate in the Indian Ocean, according to a statement released by the U.S. Sixth Fleet.

The USS Nicholas reported taking fire from a suspected pirate skiff shortly after midnight local time west of the Seychelles, the statement said. The Nicholas quickly returned fire and began pursuing the skiff, which was eventually disabled. A boarding team from the Nicholas subsequently captured and detained three people, the statement said.

The team discovered ammunition and several cans of fuel aboard the skiff, which was later sunk by the Nicholas.

Two more suspected pirates were captured on a confiscated “mother ship,” the statement said. The detainees will “remain in U.S. custody on board Nicholas until a determination is made regarding their disposition,” it said…

The Nicholas, based in Norfolk, Virginia, is part of the U.S. military’s Africa Command. 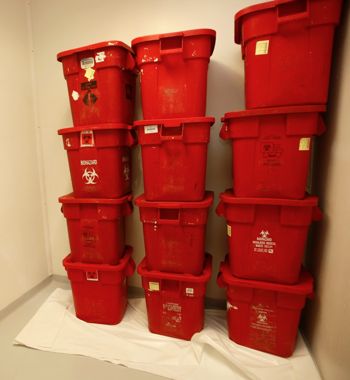 Albuquerque Police are trying to find out if an Albuquerque company that handles bodies donated for medical research tried to dump body parts in Kansas City.

First a head and torso showed up at a facility called Stericycle, a company that incinerates medical waste, but not body parts. Then police stopped a shipment to the plant last week, containing 30 drums full of body parts. Six heads were in the shipment. The labels on the drums were from BioCare in Albuquerque…

Fraud charges would be filed if authorities believe the company lied to the families of people that donated their bodies to BioCare, according to police.

“The person, my loved one, that BioCare gave me in my urn, is that my loved one or not? Or did you give me someone else,” Police spokeswoman Nadine Hamby said.

The Kansas City coroner worries about that as well. He identified an arm Tuesday because it still had a tag on it with the name of an Albuquerque funeral home. The funeral home told the coroner it thought it cremated the man’s body after BioCare returned his remains in a box in September. The funeral home then gave the ashes back to the family.

The coroner in Kansas said Wednesday that the six heads are in good condition and he should be able to identify them through photos. Records from BioCare may speed the process along.

He was paid for the research and in turn was supposed to have the remains cremated locally and ashes returned to the family.

At this point in time, it looks like he was just adding whatever was left from research to containers of medical waste shipped to Stericycle – and giving folks ashes from someone or something else.

Stephen Fry was the second person in the UK to get a Macintosh computer. Doug Adams got the first.

Now, Stephen Fry certainly is one of the first to get an iPad. This is his video of unboxing the iPad. It mates up to the interview he did with Steve Jobs – that appears in the current issue of TIME magazine.

With all of the reveals and partnership announcements here at the New York Auto Show the most important thing we’ve heard is a number: $25,280. That’s the price that Nissan said yesterday it will sell the Leaf for when it goes on sale later this year (full production starts in 2011), and it’s much lower than rumors we’ve heard from competitors in the plug-in vehicle space. We sat down with Mark Perry, Nissan’s director of product planning, to talk about this price – how it came to be, what the reaction has been, etc. – because we’re pretty sure readers would like to know more details about Nissan’s strategy.

Perry was all smiles when he talked about how Nissan got to the $32,780 price – of course, the headline is that this turns into $25,280 after $7,500 worth of federal tax credits – and we understand why. He told us that this price is the result, in part, of 17 years of work Nissan has done on lithium-ion batteries. By doing everything in-house for so many years, Nissan doesn’t need to charge the customer for battery research like other companies that are freshly bursting into the electric vehicle (EV) market and are just now figuring out how to make EVs that work. Plus, by spreading the research and development over many years, selling the Leaf for just under $33,000 allows the company to make a profit off the car, or at least minimizes early losses.

Of course, the Leaf does not exist in a vacuum, and Perry said that the $33k was most definitely based on market factors. Government incentives played a role in setting the price, Perry said, as did estimating what other companies will price their plug-in vehicles at. Considering we don’t know for sure yet what cars like the Chevrolet Volt or the Ford Focus Electric will be, we can’t say yet how Nissan’s announcement will impact those MSRPs. Still, we assume there was a lot of hand-wringing in offices that didn’t belong to Nissan.

The announcement certainly caught the attention of this household.

True, until and unless my wife’s beloved old 245 Volvo dies the question is a non-starter. With over 200K miles on the critter, she still gets 24mpg – and that’s her roundtrip commute. One gallon of gasoline per day, five days a week. Replacing it isn’t cost-effective unless it becomes absolutely required by self-destruction.

If that ever happens, it will be difficult to come with a better solution than the Nissan Leaf.

It’s a subject of grim amusement among scientists that while it is perfectly acceptable for wrinkle creams to claim to be “inspired by the science of genes” (whatever that means), real discussion of scientific process and results could result in a lawsuit.

Scientists are trained to do their battles in public, with disprovability and reproducibility as guiding concepts. Their standard is already higher than much of the rest of public discourse; by definition it has to be.

We won’t wander over to the parallel topic of fossil-fuel devotees politely called “climate skeptics” – yet.

Simon Singh was sued for libel by the British Chiropractic Association over an article that suggested there was a lack of evidence for the claims over colic, asthma and other conditions. Singh’s original statement was judged lawful in a ruling on the appeal on Thursday … at an expense to him of over £200,000.

What the case came down to was the meaning of a few words – did Singh’s statement allege that the BCA was purposely misleading people? It is having to consider the possible interpretations of the readers that makes skirting libel law so frightfully difficult, as well as unclear.

Singh has described the ruling as “brilliant” – and it is, because in such a high-profile case, this could set precedents. But it doesn’t go far enough…

Of particular interest is Paragraph 34 of Lord Chief Justice Lord Judge, Master of the Rolls Lord Neuberger and Lord Justice Sedley’s ruling on Singh’s case. It quotes the judgment in a US court of a science and libel case, Underwager v Salter:

“Scientific controversies must be settled by the methods of science rather than by the methods of litigation […] More papers, more discussion, better data, and more satisfactory models – not larger awards of damages – mark the path towards superior understanding of the world around us.”

Libel law in the UK is particularly one-sided and unfair. To the point where libel tourism is a job description.

Different countries, cultures, ideologies employ different means to try their best to hold back progress in knowledge and understanding of the real world. Foot soldiers from the ranks of True Believers are always ready and willing to join the struggle on the side of those who fear science. Paid flacks, opportunists – even non-politicians – are willing to further their ill-gotten gains through obscurantist maneuvers.

Though it sometimes feels as if we live in a uniquely reactionary day and age, I’m pleased the range of Know-Nothings from climate deniers to teabaggers, creationists to “I haven’t a racist bone in my body”-Republicans, hasn’t yet reached the level of violence and mayhem of the Inquisition. Mostly.

Western governments risk creating a new generation of Islamist extremists if they continue to support repressive regimes in the Middle East, the former head of the UN nuclear watchdog, Mohamed ElBaradei, has told the Guardian.

In his first English-language interview since returning to Cairo in February, the Nobel peace prize-winner said the strategy of supporting authoritarian rulers in an effort to combat the threat of Islamic extremism had been a failure, with potentially disastrous consequences.

“There is a need for re-evaluation … the idea that the only alternative to authoritarian regimes is [Osama] Bin Laden and co is a fake one, yet continuation of current policies will make that prophecy come true,” he said. “I see increasing radicalisation in this area of the world, and I understand the reason. People feel repressed by their own governments, they feel unfairly treated by the outside world, they wake up in the morning and who do they see – they see people being shot and killed, all Muslims from Afghanistan, Iraq, Somalia, Sudan, Darfur.”

ElBaradei said he felt vindicated in his cautious approach while head of the International Atomic Energy Authority. He revealed that all his reports in the runup to the Iraq war were designed to be “immune from being abused” by governments. “I would hope that the lessons of Iraq, both in London and in the US, have started to sink in,” he said.

“Sure, there are dictators, but are you ready every time you want to get rid of a dictator to sacrifice a million innocent civilians? All the indications coming out of [the Chilcot inquiry] are that Iraq was not really about weapons of mass destruction but rather about regime change, and I keep asking the same question – where do you find this regime change in international law? And if it is a violation of international law, who is accountable for that?”

END_OF_DOCUMENT_TOKEN_TO_BE_REPLACED

Investigators said Barrie Turner, of Delta, B.C., operated 200 Web sites, some in business since 2005, that scammed clients with fees as high as $997 for a six-month membership and the promise of two to seven introductions a month, The Seattle Times reported.

Turner was arrested Friday after crossing the border into the United States to pick up mail at a post-office box in Point Roberts, Wash..

He created fake profiles of “eligible” singles and sent them to customers of his sites as potential matches, court papers said. Customers who responded would get e-mailed responses from fictitious potential matches saying say they’re no longer available, prosecutors say.

“The investigation has not yet identified any customers who received the services advertised,” said Emily Langlie, a spokeswoman for the U.S. Attorney’s Office.