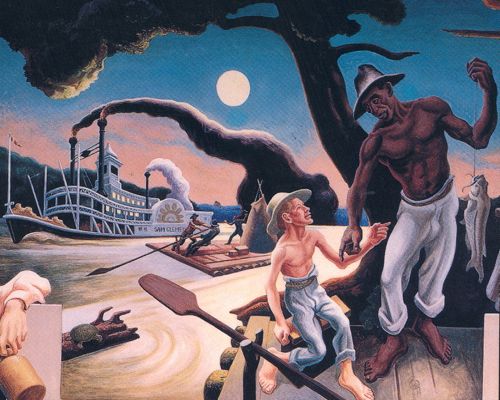 Wry and cranky, droll and cantankerous — that’s the Mark Twain we think we know, thanks to reading “Huck Finn” and “Tom Sawyer” in high school. But in his unexpurgated autobiography, whose first volume is about to be published a century after his death, a very different Twain emerges, more pointedly political and willing to play the role of the angry prophet.

Whether anguishing over American military interventions abroad or delivering jabs at Wall Street tycoons, this Twain is strikingly contemporary. Though the autobiography also contains its share of homespun tales, some of its observations about American life are so acerbic — at one point Twain refers to American soldiers as “uniformed assassins” — that his heirs and editors, as well as the writer himself, feared they would damage his reputation if not withheld.

“From the first, second, third and fourth editions all sound and sane expressions of opinion must be left out,” Twain instructed them in 1906. “There may be a market for that kind of wares a century from now. There is no hurry. Wait and see.”

Twain’s decree will be put to the test when the University of California Press publishes the first of three volumes of the 500,000-word “Autobiography of Mark Twain” in November. Twain dictated most of it to a stenographer in the four years before his death at 74 on April 21, 1910. He argued that speaking his recollections and opinions, rather than writing them down, allowed him to adopt a more natural, colloquial and frank tone, and Twain scholars who have seen the manuscript agree…

Next week the British literary magazine Granta will publish an excerpt from the autobiography, called “The Farm.” In it Twain recalls childhood visits to his uncle’s Missouri farm, reflects on slavery and the slave who served as the model for Jim in “Huckleberry Finn,” and offers an almost Proustian meditation on memory and remembrance, with watermelon and maple sap in place of Proust’s madeleine…

Twain’s opposition to incipient imperialism and American military intervention in Cuba and the Philippines, for example, were well known even in his own time. But the uncensored autobiography makes it clear that those feelings ran very deep and includes remarks that, if made today in the context of Iraq or Afghanistan, would probably lead the right wing to question the patriotism of this most American of American writers…

As if the crackpot criticisms of the American Rightwing had made it past the 19th Century.

He is similarly unsparing about the plutocrats and Wall Street luminaries of his day, who he argued had destroyed the innate generosity of Americans and replaced it with greed and selfishness. “The world believes that the elder Rockefeller is worth a billion dollars,” Twain observes. “He pays taxes on two million and a half…”

Nothing has changed except the occasional Republican administration which codifies that corruption.

By the time all three volumes are available, Mr. Hirst said, “about half will not have ever been in print before.” A digital online edition is also planned, Ms. Smith said, ideally to coincide with publication of Volume 1 of “the complete and authoritative edition,” as the work is being called.

My favorite Samuel Clemens’ quote will remain – no doubt. “There is no distinctly native American criminal class – except Congress.”

100 years has changed nothing.

4 thoughts on “Dead for a century, Mark Twain finally says what he meant”