The 91-year-old widow lived by herself in a tumbledown house on a desolate country road. But she wasn’t alone, not really, not as long as she could visit her husband and twin sister.

No matter they were already dead. Jean Stevens simply had their embalmed corpses dug up and stored them at her house — in the case of her late husband, for more than a decade — tending to the remains as best she could until police were finally tipped off last month.

Much to her dismay.

“Death is very hard for me to take,” Stevens told an interviewer…

But their bodies are with the Bradford County coroner now, at least temporarily off limits to the woman who loved them best. District Attorney Daniel Barrett said Tuesday that Stevens plans to build a crypt on the property.

“If she does that, the bodies will be released for that purpose,” he said. “Otherwise they will be re-interred…”

And the police seem to have brains enough to help her sort out a legal solution.

Declaration of Independence in 2008
Daylife/Getty Images used by permission

Kosovo’s unilateral secession from Serbia in 2008 did not violate international law, the World Court has said in a decision with implications for separatist movements everywhere.

The non-binding, but clear-cut ruling by the International Court of Justice is a major blow to Serbia and will complicate efforts to draw the former pariah ex-Yugoslav republic into the European Union.

It is likely to lead to more states following the United States, Britain and 67 other countries in recognizing ethnic-Albanian dominated Kosovo, which broke away after NATO intervened to end a brutal crackdown on separatism by Belgrade.

“The court considers that general international law contains no applicable prohibition of declaration of independence,” Judge Hisashi Owada, president of the ICJ, said in the clear majority ruling delivered in a cavernous hall at the Hague-based ICJ.

News of the court’s decision prompted celebrations in the Kosovo capital Pristina, where people drove through the streets waving Kosovo, U.S. and British flags and shouting “USA, USA!.”

That last bit is scary enough on its own.

Meanwhile, I have to wonder about what depth was dedicated to discussion of ethnic minorities moving into a region – and then claiming it as their own? The history of Kosovo since WW2.

Albanians moved in and eventually became a regional majority and declared independence.

It’s the sort of politic tactic long used as a slander and fear in the United States. First against Mormons. Nowadays – realistically – against Mexicans. I have a few acquaintances who have dedicated their lives to reclaiming the Mexican state of Aztlan – which would include Texas, New Mexico, Arizona and southern California at a minimum.

Xenophobes on the American Right don’t miss a chance to bring it up every chance they have. And there are enough of those, lately.

It’s also cutting off your nose, etc., on the part of the U.S. government which applauds Kosovo – and whines to the heavens over Ossetia. Which is it to be: hypocrisy or a double standard?

A Government-funded science centre has been accused of height discrimination after turning down anyone over 5ft 6ins for a job dressing up as a cartoon character.

The Glasgow Science Centre…advertised for a £5.93-an-hour ‘casual worker’ to promote a Wallace and Gromit exhibition.

Prospective candidates…must be between 5ft 3ins and 5ft 6ins tall, ruling out most of the male population.

The £2m ‘World of Cracking Ideas’ exhibition, which runs until November 30 this year, was first held at the Science Museum in London and is billed as a ‘fabulous interactive exhibition stuffed full of crazy innovation’…

The Science Centre advert states: “The role will involve wearing a Gromit costume, greeting visitors and promoting the exhibition…

One hopeful applicant, who did not want to be named, but stands at 5ft 7ins tall, said he was ‘furious’ after being given short-shrift by science centre bosses who told him he ‘had to be of a height between 5ft 3ins and 5ft 6ins’.

“Our advertisement for actors mentions a height restriction. This is due to the size of the costume that must be worn.”

Offer him an alternative job wearing a woman’s size 2 thong. Jogging. See if he quits before he saws himself in half. 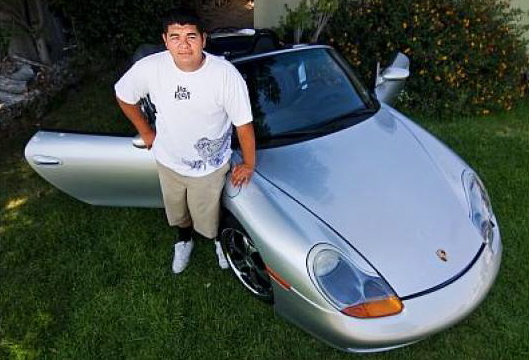 Steven Ortiz, 17, dreamed of one day owning a luxury sports car — a dream that became reality after he posted a used cell phone on Craigslist.

“My friend gave me a free phone and said, ‘Do what you want with it,'” … “So I put it on Craigslist on the barter section.”

After some serious patience, research and a lot of talking, his cell phone trade landed him an iPod touch, which he managed to barter up for a dirt bike and then to a Macbook Pro laptop computer. Before long, he was the proud owner of an 1987 Toyota 4Runner.

Eventually, he landed a classic Ford Bronco SUV — the golden ticket that would soon get him into the driver seat of a luxury sports car. “I just went for it,” he said. “I knew the Bronco was worth more at the end.”

So what’s his secret?

“It’s trying to catch people who want what you have,” Ortiz said. “The man that needed the laptop had an extra car,” so both parties got what they wanted, he added.

A story like this one comes along more often than you think. I wonder how often the horse-trading ends up a a disaster. It did for me – at least once.

OTOH, I have a classic AMP mountainbike and a Klein road bike I no longer ride, a fly rod or two and some tackle I don’t use anymore. Maybe I should check out placing a notice in Craigslist?

An eye-wateringly stellar list of authors, from Philip Roth to Orhan Pamuk, Martin Amis and John Updike, is bypassing publishers to sell digital editions of books directly to readers, via Amazon.

The brainchild of uber-agent Andrew “The Jackal” Wylie, Odyssey Editions launches today. It offers 20 modern literary classics as ebooks for the first time, exclusively via Amazon.com’s Kindle store. The books, all priced at Amazon’s usual ebook rate of $9.99, range from Amis’s London Fields, Rushdie’s Midnight’s Children, Roth’s Portnoy’s Complaint and VS Naipaul’s The Enigma of Arrival to titles from the estates of dead authors such as John Updike, William S Burroughs, Saul Bellow and Hunter S Thompson.

The authors all share Wylie as their agent, and the move makes good on his threat last month that, dissatisfied with the terms publishers have been offering for ebooks, he would remove them from the equation.

“We will take our 700 clients, see what rights are not allocated to publishers, and establish a company on their behalf to license those ebook rights directly to someone like Google, Amazon.com, or Apple. It would be another business, set up on parallel tracks to the frontlist book business,” he told Harvard Magazine in June.

The exclusive deal with Amazon, which will last for two years, effectively removes other booksellers from the equation as well: modern classics including Vladimir Nabokov’s Lolita and Hunter S Thompson’s Fear and Loathing in Las Vegas will only be sold through the internet retailer.

Book publishers are like newspaper publishers – or local TV stations for that matter. The goose has been laying golden eggs for so long they think they hold a patent on making money.

Two prisoners have escaped from a prison in Argentina after guards placed a dummy with a football for a head in the watch tower because of a shortage of manpower.

The two men, Walter Pozo and Cesar Andres, leapt over a wire fence before scaling the perimeter wall and making their escape unnoticed by the remaining guards.

Prison workers said that a shortage of staff meant they were only able to man two of the 15 guard towers so they had to resort to using a stand in. A prison source said: “We’ve made a dummy out of a football and a prison officer’s cap, so that the prisoner see its shadow and think they’re being watched.”

“We named him Wilson, like in the film Cast Away, and put him in one of the towers,” the man told the Diario Rio Negro newspaper, referring to the Tom Hanks film in which his character invents a volleyball character for company.

The source said that the video cameras monitoring the perimeter wall had stopped working some months ago. He said that he hoped the incident would alert the authorities to the problems with lack of resources and that politicians would act to improve the conditions.

Both had been serving out sentences for armed robbery at the jail in Argentina’s Neuquén province. The escaped convicts, who were nearing the end of their sentences so were being held in a part of the prison with fewer security measures, have not yet been recaptured.

The casual quality of life in most Latin cultures has long been celebrated. Especially – sometimes – by crooks willing to show a bit more initiative than their guards.

Perhaps TSA will be a thing of the past by then – and I’ll resume flying.