A little known folk musician from Edinburgh has found himself in the middle of an extraordinary week-long diplomatic tussle between the Scottish Government and the Obama administration in America.

Musician Dan Willson aka Withered Hand was denied a visa in time to attend the influential South by Southwest music festival (SXSW) in Texas because US authorities deemed he simply was not good enough.

But after a week-long campaign by the SNP government – backed by Radio 1 DJs, BBC6 Music, the organisers of T in the Park, and Creative Scotland – his visa application was approved on Friday. He flew out of Edinburgh yesterday morning hoping to pick up his visa in New York…

Withered Hand is one of 17 Scottish bands invited to play at SXSW. The festival is an important showcase for acts and is credited with launching Franz Ferdinand and Snow Patrol to worldwide success.

Willson’s application had been delayed because he had failed to prove the “extraordinary musical ability” needed to obtain a performance visa. The official rationale was that he did not charge enough for his gigs.

“They said it wasn’t commensurate with extraordinary ability,” said Willson. “It’s really annoying. What I do is fairly niche. I’m not a pop star. So its weird being judged against someone’s interpretation for what constitutes extraordinary ability or commercial success.”

Despite being unsigned in the UK, Willson has just signed a US record deal with San Francisco label Absolutely Kosher.

They have all taken the traditional vow of poverty, so police and tax inspectors in Spain want to know why the nuns at Zaragoza’s Santa Lucia convent claimed that a robber had stolen €1.5million in cash from them.

The nuns’ unorthodox banking system, using dozens of black bin liners stuffed with high denomination euro banknotes, has made investigators suspect that the cash they handled did not come solely from the Sunday collection plate. The fact that they later changed their story to claim that the money that disappeared while they were saying their prayers a fortnight ago only amounted to €450,000 has done nothing to allay those suspicions.

According to the evidence given to police, the nuns kept their haul of cash in a locked cupboard, much of it in the €500 notes favoured by those paying for, or receiving, services in Spain’s abundant black economy…

The nuns said they had been preparing to distribute some of the money to other convents in financial difficulties. Unlike most of the nuns who live in the hundreds of crumbling, half-empty convents dotted around Spain, the 16 Cistercians at Santa Lucia have no financial problems.

As expert restorers of old books, their services are constantly required by libraries and private collectors. Neighbours said the convent was always busy, with the nuns’ white van constantly driving in and out of the gates. One of their number, Sister Isabel Guerra, is a renowned portrait painter whose pictures fetch up to €40,000 each and are key to maintaining other Cistercian convents around Spain…

So, if they are telling the truth, why didn’t they use a bank. I doubt if there’s a dicho in their catechism about refusing interest on savings.

Nope – changing your story to reduce the cash stolen by two-thirds is another footnote that prompts a bit more than curiosity.

A 60-year-old man has been found on the roof of his floating house nearly 10 miles out at sea, two days after the tsunami that devastated the north-east coast of Japan.

Incredibly, he was spotted by a maritime self-defence force destroyer taking part in the rescue effort as he clung to the wreckage with one hand and waved a self-made red flag with the other. He had been at sea for two days.

Reports said that on being handed a drink aboard the rescue boat, Shinkawa gulped it down and immediately burst into tears. His wife, with whom he had returned home as the tsunami approached, is still missing.

He was quoted as saying: “No helicopters or boats that came nearby noticed me. I thought that day was going to be the last day of my life.”

Officials said Shinkawa was in good condition after being taken to hospital by helicopter.

“I ran away after I heard a tsunami was coming,” he told Jiji Press. “But I turned back to fetch something from home and was swept away. I was rescued while hanging on to the roof of my house.”

The self-defence forces said the good weather and calm waters had allowed Shinkawa to stay alive during his 48-hour drift.

The only silliness that gets added on top of that is prattle about some invisible being or spirit guiding your destiny. Poisonally, I would save up to prepare a hell of a thank-you meal for the folks aboard the Choukai who finally spotted me. 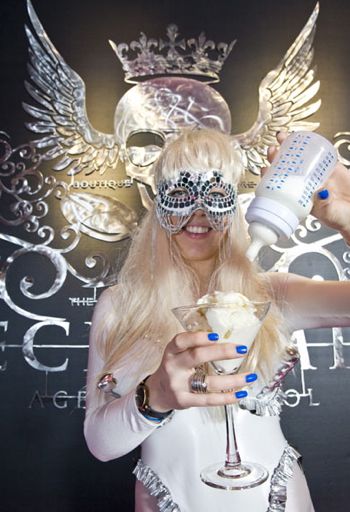 Matt O’Connor, founder of The Icecreamists in London’s Covent Garden, said he had received a letter from Lady Gaga’s lawyers informing him that the singer planned to sue him over the name…

O’Connor denied the flamboyant singer — whose meat dress and other strange outfits have promoted her quirky image and delighted her fans — had inspired the name he chose for the dessert made from breast milk blended with Madagascan vanilla pods and lemon zest.

“It’s just the first noise a baby makes — it’s nothing to do with anyone else,” he said, adding that he was working on a response to the letter.

O’Connor told Reuters he was considering taking legal action against the council for reputational damage.

“They made the damaging assertion that breast milk ice cream isn’t safe,” he said, adding that it was an overreaction to the safest food in the world.

Add a lawyer into any economic or political equation and you can almost be assured of losing touch with reality.

It’s not the kind of prize that one picks up in person. Germany’s undertakers, embalmers and grave diggers are up in arms about a radio competition that offers listeners the chance to win a luxury funeral.

All the contestants have to do – and some 650 have already entered – is compose the most original or witty epitaph for their gravestone.

The lucky winner of a grand euros 3,000 burial – complete with marble headstone, wreath, gratuities for the grave diggers and transport from church to cemetery – will be announced on Ash Wednesday, which marks the beginning of Lent and is traditionally a sombre day.

Radio Galaxy from Aschaffenburg in southern Germany, dreamt up the idea after a pupil died in a school bus crash.

“We talked about how to tackle this with our younger listeners,” said Jens Pflueger, 25, a presenter. “We realised that it was our duty to get people talking about death.”

So alongside the usual tracks by Katy Perry and Lady Gaga, the station started to play Chopin’s Funeral March, and – with the help of newspaper advertisements marked with a black cross – announced the contest…

Church leaders have described the contest as tasteless, and said that it may encourage people to commit suicide. Konrad Hilpert, a Munich University professor of moral theology, called it obscene.

Church leaders, no surprise, haven’t a clue. Those of you who know how seriously I take questions like this will not be surprised to learn that my epitaph – if I had a tombstone [because I won’t] – will be, “Hey, you kids – get off my lawn!”

Sitting in a cart just to the side of Deerfield Country Club’s 17th tee, the two golfers were still savoring their pars on the previous hole when they were confronted by two men wearing ski masks and flashing .38-caliber revolvers.

Melvin Philpart was playing golf in Deerfield Beach, Fla., with his cousin, Lataurus Randall, when they were approached by two gunmen who may have entered through a hole in a fence. Mr. Randall was fatally shot.

The gunmen ordered the golfers to the ground and demanded their money. One of the masked men then tussled with one of the golfers, Lataurus Randall, shooting him once in the back before both robbers fled, empty-handed, into a nearby stand of Australian pines bordering a low-income neighborhood.

Mr. Randall, a 35-year-old owner of a landscaping company who had a 9-year-old son, died in the hospital the next day. His golf partner and cousin, Melvin Philpart, who was unhurt, said he wished he had done more to help. But he said he was startled to see two masked men with guns on the golf course he has played most of his life.

“When these guys showed up, I first thought it was a joke,” said Mr. Philpart, 43, who does auto detailing in nearby Boynton Beach. “I said to one of them, ‘What do you think you’re doing out here? This is a golf course…’ ”

Golfers are frequently warned in some pro shops to be vigilant. Some golfers now say they carry their wallets and keys, rather than leaving them in the golf carts…

The shooting, on Jan. 13, has baffled the police and continues to attract interest in the local news media and among golf bloggers, who warn that the shooting is a reminder that players should always be on the lookout, even on the greens.

“Clearly, no one should play golf in fear,” Bart Pfankuch, a Southwest Florida golf blogger, wrote. “But it is worth a reminder to keep an eye out, and your instincts plugged in, whenever approached by someone who does not have a clear reason to be on the course.”

Life in these United States.

No, I’m not kidding.