Hop was one of the inside editors here at Eideard. And as you can see from the tribute above by John C. Dvorak, one of the leading figures among a larger group of editors at Dvorak Uncensored and the Cagematch.

He will be sorely missed. 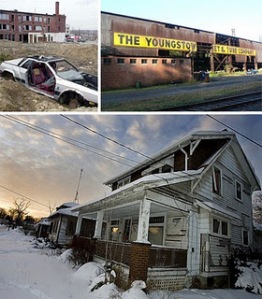 The number of people living in neighborhoods of extreme poverty grew substantially, by one third, over the past decade, according to a new report, erasing most of the gains from the 1990’s when concentrated poverty declined.

More than 10 percent of America’s poor now live in such neighborhoods, up from 9.1 percent in the beginning of the decade, an addition of more than 2 million people, according to the report by the Brookings Institution, an independent research group…

The report analyzed Census Bureau income data from 2000 to 2009, the most recent year for which there is comprehensive data.

The data captures the first part of the decade most clearly, when growth in concentrated poverty was highest in metropolitan areas in the Midwest. Of the neighborhoods where poverty became most acute, three were Midwestern: Toledo, Youngstown and Detroit.

The report estimated that in metropolitan areas, worsening economic conditions in 2010 may have bumped up the portion of those living in concentrated poverty metro areas to 15 percent, a notch below the 1990 level, 16.5 percent. The biggest rises were in Sun Belt areas like Cape Coral, Fla., and Fresno, Calif., where the housing bust was biggest…

“It’s the toughest, most malignant poverty that we have in the United States,” said Peter Edelman, the director of the Center on Poverty, Inequality and Public Policy at Georgetown University. “It’s bad outcomes reinforcing each other.”

Just one more thing the Bush/Cheney era can take credit for.

China successfully carried out its first docking exercise on Thursday between two unmanned spacecraft, a key test of the rising power’s plans to secure a long-term manned foothold in space.

The Shenzhou 8 spacecraft joined the Tiangong (Heavenly Palace) 1 module about 340 km above Earth, in a maneuver carried live on state television in the early hours of the morning.

The 10.5 meter-long unmanned Tiangong, launched on September 29, is part of China’s preparations for a space laboratory at some point in the future…

“We believe that making this breakthrough and mastering the space docking technology is a meaningful and historic breakthrough for our country and a huge technical leap forward,” Wu Ping, spokeswoman for China’s Manned Space Engineering Programme, told a news conference.

Wu said all of the components in the docking mechanism, as well as 600 onboard instruments, were designed and manufactured by Chinese firms, mostly state-owned enterprises…

The next stage will be two similar docking exercises in 2012, with at least one expected to carry astronauts…

Beijing also plans an unmanned moon landing and deployment of a moon rover in 2012. Scientists have raised the possibility of sending a man to the moon after 2020.

Cyber criminals use Trojans to steal information, but are the same techniques of electronic surveillance being used by the agencies set up to protect us?

Internet crime “is no longer the elephant in the room. It is the room,” Sir Ian Andrews, chairman of the Serious Organised Crime Agency (SOCA), told this week’s London Conference on Cyberspace. The rapid increase in the cost of cyber-crime means police and governments are having to protect themselves from a threat that is often nearly impossible to trace. But the web has also become a vital space to gather evidence on suspects for traditional crimes…

There was controversy earlier this month when the German state of Bavaria admitted using a Trojan – a malicious program sent to a digital device covertly to collect data – to gather intelligence on suspected criminals. The R2D2 malware received criticism for it potentially allowing officials to launch software and capture images on the infected computer…

Ironically, the Trojan is not believed to have been sophisticated enough to beat antivirus software so would only be able to infiltrate unprotected computers – something unlikely amongst experienced computer users.

In the UK, senior officials have not ruled out doing something similar. “In terms of the sensitivities around particular Trojans, it wouldn’t be something that we would particularly like to talk about,” says Lee Miles, head of cyber at the UK serious crime agency, SOCA.

Cybercrime expert Professor Peter Sommer, of the London School of Economics, believes that adding software remotely to a suspect’s computer would probably be illegal under current UK law. And the introduction of new powers for the police is something that is often picked over with a fine-toothed comb before its introduction is even proposed.

“We do need to exercise care embarking down this path [of using new techniques] because of the unintended consequences – it’s something that has to be considered very carefully,” says UK Minister for Crime and Security James Brokenshire.

Will police expand the use of malware to catch cyber-criminals? Short answer? I hope so.

If they aren’t doing so, already, I imagine any policing body that can afford to will budget for counter-measures to cybercrime. After all, it seems as if the cost of the practice is still minute compared to doing nothing – and significantly less than simply relying on buying access by threats of long sentences versus cooperation by the few killer klowns ever caught through conventional means.

We’ve already had instances of counter-measures fired back at zombie servers used by hackers. That can be turned to trojan techniques in any number of ways. But, then, if I have thought of doing this – someone in computer security is probably already doing it.

A man has escaped jail after he secretly added steroids to his wife’s food to make her put on weight and “keep her at home”.

Dalwara Singh slipped steroids into his wife’s dinner, causing her to break out in spots and grow hair on her face. He was only caught out when the couple’s teenage daughter heard him grinding a pestle and mortar in his bedroom.

His now estranged wife then found the steroids hidden in a locked cupboard and called the police.

The judge said: “You may have been doing it to make her give up her job, gain weight and stay indoors and make her want you and rely on you. “It was a well-planned exercise and you say you gave her the steroids at least four or five times. It’s had a terrible effect on her, causing long-term emotional harm…”

Singh was given a 12-month jail sentence, suspended for two years, and ordered to attend a domestic abuse programme.

He was also made the subject of a restraining order which bans contact with his estranged wife other than through solicitors or social services.

The court has determined the amount of steroids administered were limited and should have no lasting effect on Ms Singh. I would have put a provision in the sentence that made him responsible for any health problems which may show up. She’s suffered enough at his hands not to have to worry about future surprises.

President Hu Jintao of China will arrive in Cannes, France, this week pondering a plea from Europe for tens of billions of dollars to help the continent get out of its debt crisis. And President Obama will arrive with a smile, some hearty handshakes, and his own plea: that Greece get its act together and that Europe fix its economic ills, which he has called one of the biggest drags on the United States’ own ailing economy…

The last few months may well end up being an inflection point, in which the United States, though easily still the world’s leading power, no longer has quite the responsibility or the burden it once did. The pattern has been evident in the Arab Spring, with the American military playing mostly a supporting role in Libya, and now in the European financial crisis, with Asian money coming to aid the Europeans…A significant difference in policy between Obama and traditional Cold Warriors in both of the TweedleDeeDum parties.

In many ways, the situation is a natural evolution of the campaign promises made by Mr. Obama in 2008, when he vowed to turn away from the Bush administration’s more unilateral approach.

As president, Mr. Obama is now overseeing the withdrawal of all troops from Iraq and has emphasized multilateral diplomacy in all its messy forms. He refused to consider American intervention in Libya until the United Nations approved a resolution supporting it, and then he stepped back and allowed France and Britain to take the lead though American military help remained essential…We only have about 174 countries to go to withdraw from the rest of our foreign military bases.

Mr. Obama’s backers say that he is simply acknowledging reality and developing a clear-eyed strategy for what the United States can and cannot do and that he ultimately may prove right in diagnosing Europe’s economic problems and its need to take difficult steps to fix them…

Arriving in Cannes on Thursday, Mr. Obama will be trying to balance providing that leadership while not taking on any of the additional burden — particularly financial — that such leadership often requires…

But for all the acceptance that the United States will no longer be the world’s policeman and financier, the emerging strategy carries risks…

The American military remains the world’s most formidable, and the most likely to be called on to back American allies like Israel, Japan and South Korea.

Of course, no one expects South Korea or Japan to invade one of their neighbors – and start a war.

For the second year in a row, Tokai University can lay claim to the winner’s laurels in the 2011 Veolia World Solar Challenge, a sun-powered race challenge in Australia that winds over 1,800 miles between Darwin and Adelaide using only 5 kWh of on-board energy and the rest beamed in directly from the sun. As the race’s website says, “These are arguably the most efficient electric vehicles.”

According to the provisional results…seven teams managed to go the entire 2,998 kilometer but Tokai came out on top because their average speed – 91.54 kilometers an hour – was faster than any other finisher. The Tokai’s final time was 32 hours and 45 minutes. The fact that only seven teams finished out of a starting list of 37 shows that this is not an easy race, and this year was particularly difficult thanks to brush fires (set by arsonists) along the route.

We have kin who have worked their butts off for similar competitions in North America – and especially appreciate the effort not only by the designers and teams; but, everyone who works to produce the competition.