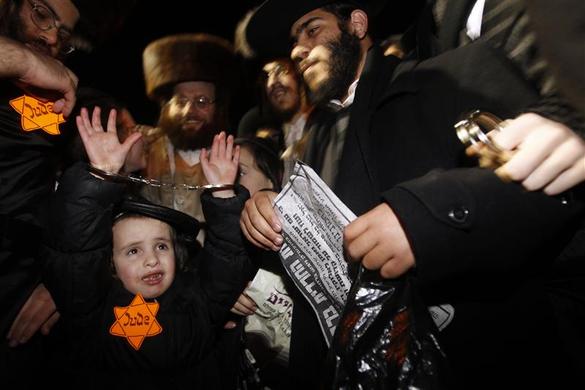 Ultra-Orthodox Jewish demonstrators look at a boy (low L) wearing a cloth cap and a yellow Star of David inscribed with “Jude”, Jew, in German, sewn on his jacket as he raises his hands during a protest in Jerusalem’s Mea Shearim neighbourhood December 31, 2011. The demonstrators caused outrage on Sunday by dressing children as Holocaust victims to protest against what they see as persecution of devout Jews seeking gender separation in Israel.

Not much different from priests equating gay rights parades as equivalent to KKK marches.

There’s a surprising amount of water in pretty much everything – first-gen biofuels, anyone? – and Ford thinks it makes sense to get some of that precious liquid out of the process of making vehicles. Thirty percent, to be exact.

That’s the target that Ford recently set for global water reduction, per vehicle, by 2015. It’s just the latest in a reduction effort that has been going on since 2000, when the company started its Global Water Management Initiative. Ford claims it’s already reduced the water used per vehicle by 49 percent between that year and 2010. The 30 percent reduction target is going to be compared to the company’s 2009 levels.

How does the water get cut? By using something called Minimum Quantity Lubrication (MQL) machining (aka dry-machining) and by paying special attention to ways to treat and reuse “wastewater,” to cite two examples Ford offers. Dry-machining, “lubricates the cutting tool with a very small amount of oil sprayed directly on the tip in a finely atomized mist, instead of with a large quantity of coolant/water mixture.” The end result? Hundreds of thousands of gallons of water that don’t need to be sent through a Ford factory.

The amount of water used in conventional coolant/water mixtures is daunting. Though we all tremble over the task of diminishing our addiction to petroleum, our reliance upon water in industrial processes threatens individual and social water consumption at a truly scary rate.

I’m not so worried about running out of the former. Running out of water on this planet endangers even a sensibly reduced population.

Disclaimer: I own enough Ford shares to pay for a set of tyres – if I owned a Ford.

A pioneering police division has cut serious violent crime by a record 20% by identifying and tackling specific “problem families” and helping to find jobs for young people in trouble.

Police in North Lanarkshire have identified the most prolific problem families in different council wards and used a combination of persuasion and compulsion to get young people into work, sport and training.

Divisional Commander Chief Superintendent Graham Cairns said: “We know that a small number of people are responsible for most of our crime.

“By mapping out diversionary activities and connecting kids into ongoing activities that interest them we have reduced youth disorder by 43% in the last two years and that is massive. We cut serious assaults by 20% last year and they are down a further 14% so far this financial year…overall violence has been cut by 22% and that includes murder and attempted murder.

“We ran a Pathfinder initiative for kids who are emerging on our radar and we work with them over consecutive months before going on an outward-bound weekend with them.

“They get to know the cops and we get to know them, but they also get to break down barriers with the other local kids whom they perhaps saw as a threat…As an extension of this we have now had meetings with employability agencies and are trying to connect those kids into training for employment.

“Some kids come from families with maybe three generations of worklessness and if we are to break that cycle then we have to be proactive in doing it.

END_OF_DOCUMENT_TOKEN_TO_BE_REPLACED

Medical marijuana advocates are hoping state governments can succeed where their efforts have failed by asking federal authorities to reclassify pot as a drug with medical use.

Shortly before Christmas, Colorado became the fourth state to ask the U.S. Drug Enforcement Administration to reclassify marijuana as a narcotic in the same league as heavyweight painkillers including oxycodone. The governors of Washington and Rhode Island filed a formal petition with the agency in November, and Vermont signed onto that request shortly afterward.

All four are among the sixteen states and the District of Columbia that have laws on the books that allow the medical use of marijuana, even though the drug remains illegal under federal law. Meanwhile, federal authorities have asserted their power by raiding dispensaries in states including California and Washington.

Supporters say the public is on their side, and the state requests show the feds are increasingly isolated on the issue. But they acknowledge it’s still an uphill battle…

In their November petition, Washington Gov. Christine Gregoire and Rhode Island’s Lincoln Chafee argued that “the vast majority of modern research” has found marijuana useful for treating patients with glaucoma, for relieving the nausea suffered by cancer patients in chemotherapy and for relieving symptoms of degenerative nerve diseases…

Critics call medical marijuana a “Trojan horse” for legalizing the drug entirely, and federal authorities mounted a string of high-profile raids in California, Washington and Montana in 2011…

Which further convinces social conservatives that their backwardness has at least an opportunist ally in the White House.

Morgan Fox of the Marijuana Policy Project said the states’ requests to reclassify the drug “could and certainly should” give the states some breathing room, “but I really don’t think it will…I think that it’s not going to provide any real tangible benefits immediately,” he said. But it if succeeds, “It will definitely bring the federal government more in line with currently accepted science.”

In the meantime, “There’s no reason for the federal government to be wasting resources going after medical marijuana providers,” he said.

A Russian spacecraft that became stranded in orbit on the way to Mars last year is expected to fall back to Earth next week.

The 13.5 tonne Phobos-Grunt has been circling Earth since November when rocket boosters failed to ignite and send the spaceship on its journey to the Martian moon of Phobos. The spacecraft suffered a computer malfunction after launch and when repeated attempts to contact the rocket failed, the Russian space agency, Roscosmos, had to abandon the mission.

Officials at Roscosmos admitted that 20 to 30 fragments of Phobos-Grunt, weighing a total of 200kg, might hit the Earth. Among the most likely parts to survive are the cone-shaped sample return capsule that is protected with a heat shield. The capsule was designed to survive a crash landing without a parachute.

Any components that are not vaporised during re-entry are likely to fall into the ocean or land in sparsely populated areas.

Which is what the PR folks for every space agency always say.

The spacecraft, the largest planetary rocket ever built by Russia, was designed to return rock samples from Phobos, the first time material would have been brought back from the moon of another planet. The rocket was to deliver a Chinese Mars orbiter and carried containers of bacteria to test their survival in space.

Space agencies tracking the rocket from radar stations around the world have stepped up their monitoring to once every day. As the spacecraft nears re-entry, officials will track its descent hour by hour to improve predictions of where any debris might land…

Tracking Phobos-Grunt will allow space agencies to work out when the rocket will begin re-entry, but does little to help predict where debris might land. The spacecraft is travelling so fast it completes an orbit of Earth every 90 minutes, so even a small uncertainty in its trajectory or how it breaks up can make a difference of hundreds of miles on the Earth’s surface.

Leave a note for your lawyer in case it gets you. At least your survivors may receive some compensation. Sometimes it ain’t fun being a beta-tester for approved technology.