Sample from the Koryak Mountains

Quasicrystals have an unusual structure – in between those of crystals and glasses. Until two years ago, quasicrystals had only been created in the lab – then geologists found them in rocks from Russia’s Koryak mountains. In PNAS journal, a team says the chemistry of the Russian crystals suggests they arrived in meteorites.

Quasicrystals were first described in the 1980s by Israeli researcher Daniel Schechtman, who was awarded last year’s Nobel Prize in Chemistry for the discovery.

Schechtman’s ideas were initially treated with doubt or scorn by some of his peers, who thought the structures were “impossible”.

Quasicrystals break some of the rules of symmetry that apply to conventional crystalline structures. They also exhibit different physical and electrical properties.

In 2009, Luca Bindi, from the University of Florence, Italy, and his colleagues reported finding quasicrystals in mineral samples from the Koryak mountains in Russia’s far east.

The mineral – an alloy of aluminium, copper, and iron – showed that quasicrystals could form and remain stable under natural conditions. But the natural process that created the structures remained an open question. Now, Dr Bindi, Paul Steinhardt from Princeton University and others claim that tests point to an extra-terrestrial origin for the Russian minerals.

They used the technique of mass spectrometry to measure different forms – or isotopes – of the element oxygen contained in parts of the rock sample. The pattern of oxygen isotopes was unlike any known minerals that originated on Earth. It was instead closer to that sometimes found in a type of meteorite known as a carbonaceous chondrite.

The samples also contained a type of silica which only forms at very high pressures. This suggests it either formed in the Earth’s mantle, or was formed in a high-velocity impact, such as that which occurs when a meteorite hits the Earth’s surface.

Uh, OK. Paul Steinhardt – one of the researchers in the PNAS report – had to remark over the fact that discovery in the lab was difficult enough for folks to say forming naturally was impossible. So, of course, nutty Mother Nature made it happen in outer space.

Authorities seized 14 laptops, seven memory sticks and 23 mobile phones, as well as fake documents and cash. The arrests come after security firm Kaspersky reported that India now sent more spam than any other country in the world.

Police said the six men, all Nigerian, would be remanded in custody until 12 January. The arrests signal attempts to crack down on a growing cybercrime problem in the region…

“We have an Information Technology Act that was introduced in 2000. But we don’t have any convictions under it and it’s silent on spam,” he said…If I’m a spammer, I would rather spam from India to India and the rest of world because nothing will happen to me.”

It’s still the biggest hoot of the day that the 6 spammers busted happen to be from Nigeria.

Is it because of bigotry on the part of the coppers? Easier to arrest African nationals. Or have the world’s leading spam hustlers actually started moving to India because they feel safer committing cybercrimes from there?

Capuchin habit of using bones of dead monks as decoration

An Italian prisoner who was serving out his sentence in an institution run by Capuchin monks has begged to return to jail rather than submit to the rigours of monastic life.

David Catalano this week fled the halfway house in Sicily for the second time in six weeks, complaining that the regime run by the bearded Capuchins was too austere. The 31-year-old inmate first ran away from the Santa Maria degli Angeli halfway house, near the town of Enna in central Sicily, at the end of November.

He turned himself into a police station, was re-arrested, and sent back.

But the criminal, who was serving a sentence for theft and had been sent to the institution under a form of house arrest, made a fresh break on Monday evening. “I don’t want to go back with the Capuchins,” he told probation officers…

The authorities acceded to his request – he was promptly sent to a prison in the nearby town of Nicosia.

The Capuchins are an off-shoot of the Franciscans, from whom they split in the early 16th century. They advocated a much simpler, more rigorous monastic code based on poverty, prayer and penance…not allowed to own property or handle money, and their food was obtained by begging…

I’d call it cruel and unusual punishment – even for a society like Italy – paying homage to religious foolishness.

Tormenting yourself to please some invisible dude in the sky has been left behind by most mainstream religions. The nutballs remaining are on their own.

German companies, working off orders for exports and investment goods, have so far defied a debt crisis the European Commission says risks triggering a recession in the euro area. The Munich-based Ifo institute’s measure of business confidence rose unexpectedly in December, and polls show most Germans see their job as secure even as Europe’s biggest economy slows…

Carmaker Audi AG said on Dec. 27 that it may add 1,200 jobs this year as it expands investment in electric vehicles and light-metal technology. Airbus SAS, maker of the A380 superjumbo whose German production sites include Hamburg, said Dec. 14 that it’s seeking 4,000 more workers. Of Hamburg’s largest 200 employers, 42 percent said they plan to boost hiring in 2012, the Abendblatt newspaper reported Dec. 30, citing its own poll…

Across Germany, 90 percent of voters said they view their jobs as secure, a poll of 2,000 respondents by Ernst & Young International for Die Welt newspaper published today showed. Forty percent said they expect the economy to weaken in 2012.

Compare that to any poll of economic confidence in the United States since Bill Clinton left office. Even in the period before the Great Recession – brought to us by Bush/Cheney in the White house – American workers confronted economic policies that focused solely on maximizing profits through outsourcing.

END_OF_DOCUMENT_TOKEN_TO_BE_REPLACED

Over 1000 new year revellers, many in fancy dress, brave freezing conditions in the River Forth during the annual swim in South Queensferry, Scotland.

I never have. I never will.

Jump into water that cold – that is. 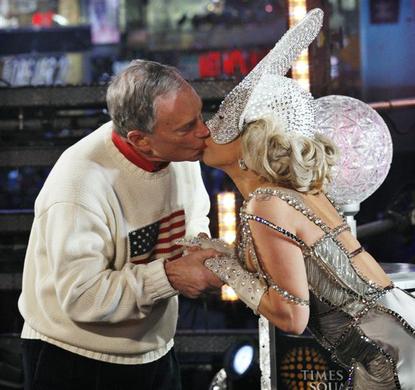 Actually – if I lived in NYC, I’d probably vote for either one of ’em.