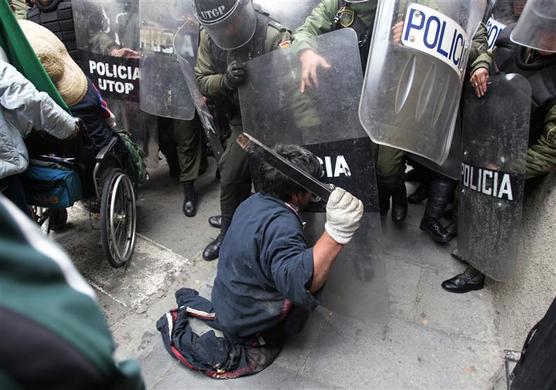 Yup. That guy in his wheelchair attacked me and my seventeen fellow officers!

Secel Montgomery Sr. stabbed a woman in the stomach, chest and throat so fiercely that he lost count of the wounds he inflicted. In the nearly 25 years he has been serving a life sentence, he has gotten into fights, threatened a prison official and been caught with marijuana.

Despite that, he has recently been entrusted with an extraordinary responsibility. He and other convicted killers at the California Men’s Colony help care for prisoners with Alzheimer’s disease and other types of dementia, assisting ailing inmates with the most intimate tasks: showering, shaving, applying deodorant, even changing adult diapers.

Their growing roster of patients includes Joaquin Cruz, a convicted killer who is now so addled that he thinks he sees his brother in the water of a toilet, and Walter Gregory, whose short-term memory is ebbing even as he vividly recalls his crime: stabbing and mutilating his girlfriend with a switchblade…

Dementia in prison is an underreported but fast-growing phenomenon, one that many prisons are desperately unprepared to handle. It is an unforeseen consequence of get-tough-on-crime policies — long sentences that have created a large population of aging prisoners. About 10 percent of the 1.6 million inmates in America’s prisons are serving life sentences; another 11 percent are serving over 20 years.

While no one has counted cognitively impaired inmates, experts say that prisoners appear more prone to dementia than the general population because they often have more risk factors: limited education, hypertension, diabetes, smoking, depression, substance abuse, even head injuries from fights and other violence…

END_OF_DOCUMENT_TOKEN_TO_BE_REPLACED

Older women hoping to conceive through IVF have been given new hope by research which shows age is not the key factor in the technique’s success. A study has found that some women aged 40 could have the same or better chances of having a baby via fertility treatment as a woman in her early thirties.

The findings will be used for a new test, which will assess up to 20 factors affecting fertility before giving couples a percentage rating of their chance of having a baby via IVF.

Although many of the factors which affect fertility are closely associated with ageing, biological age itself is not the best predictor of success or failure, according to the results of the study – which analysed the outcomes of more than 5,000 IVF treatments.

Measurements of hormone levels and the quality of embryos produced in the early stages of fertility treatment were found to give a better indication as to whether it would work, researchers said. Other factors, such as the thickness of the woman’s womb lining, her weight, lifestyle, the number of eggs produced by a woman under stimulation and the quality of the man’s sperm will all be used in new tests to assess the likely success of IVF…

Dr Mylene Yao…said: “After applying a sophisticated analysis programme to factors governing IVF success, we found that a woman of 40 could have the same or better chances of having a live baby as a woman in her early thirties.”

The former professor at Stanford University added: “This is a very important development as we want to get people away from thinking that probability is totally centred on age.

An important study for lots of folks. As much time as I spend battling for individual rights to choose what happens with your body and your life – because most of today’s conservatives and so-called libertarians would take away that right – there is a significant portion of our population equally patronized by nutballs who say you shouldn’t involve science in conception either.

What is it about this consistency in oppression?

Comedy actor Adam Sandler is leading the charge at this year’s Razzie awards with 11 nods, the highest number of nominations in a single year. The spoof prizes, formally known as The Golden Raspberrys, are handed out to celebrate the worst films of the year.

Sander’s cross-dressing comedy Jack & Jill led the pack with 12 nominations. His romantic comedy Just Go With It got five, and Bucky Larson: Born to be a Star, for which Sandler wrote the screenplay, notched up six nods.

Sandler received a worst actor and actress nomination, for Jack & Jill, in which he plays both the male and female roles…

In the female category Sandler was not the only male to be up for playing a woman, as Martin Lawrence was also nominated for Big Mommas: Like Father, Like Son.

Former Alaska Governor Sarah Palin was also singled out for playing herself in Sarah Palin: The Undefeated…

The year the awards, which are usually handed out the day before the Oscars, will be presented on 1 April.

Looking forward to the awards. Often more relevant, accurate – and deserving than the Oscars.

Somewhere among the dairy farms and forested hillsides of Schmallenberg, a picturesque district of 26,000 people in central Germany, a deadly new virus was born.

Or at least, that’s where it was first noticed a month before Christmas by scientists who examined a dead, new-born lamb with terrible deformities, on one of the 100 or so farms in the area. As is common in the world of science, the disease was named after the locality…

In the past few years Schmallenberg has made the best of its natural advantages to market itself very successfully as a healthy place for holidays close to nature. Since 2010 the town hall has worked hard to help farmers’ wives develop a lucrative sideline in farm stays where city families can enjoy life on a real working farm.

Becoming ground zero in an international disease outbreak has put all this in doubt. At the same time the livelihood of farmers who have lost lambs has been threatened.

By no means every farm has been hit, but there have been casualties, with affected farms losing as many as one in four of their new-born lambs and in some cases even 50 per cent…

Although plenty of farmers are prepared to talk openly about the virus, nobody will say exactly where in Schmallenberg it was first detected. The mayor said he did not know which farm was the first.

The mayor proudly pointed out that his town was founded in 1244. “Not much has happened since then,” he said with a wry grin. “Until now…”

“It was November 22,” Mr Halbe said, referring to the date when the disease was named after the town. The first cases were found in August.

As the scientists examined the corpse of the first dead lamb, the initial worry was that the disease could infect humans, through contact with farm animals or eating them. To everyone’s relief, that was deemed unlikely, although health agencies in Germany are still carefully monitoring farmers and vets who come into contact with infected herds.

The disease seems to move between species. Goats have been affected, and even bison. Scientists think adult cows have suffered fever and a drastic reduction in milk production, although so far none seem to have died from it…

Nowhere do Germans hope more fervently that the virus will fade away and quickly be forgotten. Then Schmallenberg can have its name back.

RTFA for the gory details – if you care to. The sort of disease particularly disturbing because it attacks in the womb.

UPDATE: The virus has crossed France and arrived in England. 74 farms in the UK affected, so far.

Pakistan has begun to demolish the compound where US forces killed Osama Bin Laden, in the city of Abbottabad…The al-Qaeda leader was shot dead at the compound in the north-western city near the capital Islamabad in May 2011.

Bulldozers arrived after dark to demolish the outer walls, and have been working through the night. There is heavy security around the compound, which served as Bin Laden’s hideout for more than five years.

Residents say an unannounced curfew has been placed in the area, and residents have been asked not to leave their homes, the BBC’s Ilyas Khan in Islamabad reports…

An official of the Abbottabad district administration told the BBC the operation was expected to be completed by about 22:30-23:00 GMT…

Officials say the demolition was decided soon after the 2 May 2011 raid, but it was put off when the government set up a judicial commission to investigate the operation by US forces.

“Since the commission has almost completed its work and did not need the compound for any further investigation, it was decided it should be razed,” an official said. He said the reason for the demolition was the visitors the place continued to attract, which posed a security threat to the area, located in an important garrison town.

Osama Bin Laden is said to have lived in the compound with his family for several years before he was killed.

On that day, a team of US special forces flew from Afghanistan to Bin Laden’s hiding place during the night in stealth helicopters on a secret operation. They swept through the buildings within the high-walled enclosure and shot dead a total of five people, including Bin Laden. Some 40 minutes later, they left, taking with them Bin Laden’s body and a hoard of computer data devices and other information containing intelligence about al-Qaeda and Bin Laden’s activities.

The Pakistan government says the prime reason for the demolition is to remove a point of focus, worship and reverence for the terrorist leader. Poisonally, I think it’s also a perpetual embarrassment for the Pakistan government’s inability [1] to capture Bin Laden living securely under their noses; and [2] US forces taking him out – also under the same noses.