Carlsberg, the Danish brewing company, is locked in a bitter feud with union leaders after reclassifying beer-making as an “essential service” to avoid industrial action by its workers.

Staff at the beer giant’s brewery in Lithuania voted to walk out over pay and conditions but were prevented from doing so after a court ruled that the business was “vitally essential”. The strike ballot was subsequently declared invalid and the stoppage illegal, with the walk out suspended for at least 30 days.

The ruling by the Lithuanian court places Carlsberg’s beer-making services in the same category as medical supplies and drinking water, after the company successfully argued that no strike should take place during its “high season”.

Unite, Britain’s biggest workers union, was drawn into the row, with Jennie Formby, the national officer, calling the situation “ridiculous”.

“This is probably the most ridiculous decision in the world. Of course many people think beer is great but it does not save lives,” she told The Daily Mirror newspaper…

The brewer’s worker’s union has launched an appeal to a higher court in the hope of overturning the decision.

There have been some amazing lies used by corporations in efforts to prevent industrial action. This probably takes the cake. 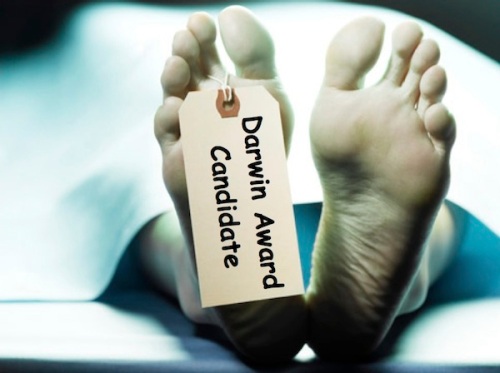 A Sri Lankan man has died while trying to set a record for the longest time spent buried alive, police say.

Janaka Basnayake, 24, is said to have buried himself over the weekend with the help of family and friends in a trench sealed with wood and soil in the town of Kantale, about 220km north of Sri Lanka’s capital, Colombo. A local newspaper reported that the trench was three metres deep.

Basnayake was buried at around 9.30am on Saturday. Police said that when he was brought to the surface at 4pm he was unconscious and was taken to a hospital, where he was pronounced dead on arrival…

Basnayake’s mother, LD Leelawathi, said her son had enjoyed performing unusual acts since his childhood – a liking that grew after watching movies, the Lankadeepa newspaper reported. It quoted her as saying her son had been buried alive on two previous occasions – for two and a half hours and six hours respectively.

It was unclear whether there is an official world record for the longest time buried alive.

Poor bugger just may have set a new record for the period of time he was alive. We’ll never know.

The Guiness World Records stopped recognizing any record in 1991 citing safety concerns over people killing themselves in the attempt..

Iceland began the trial Monday of former prime minister Geir Haarde for failing to prevent a 2008 financial crash, thought to be the only prosecution in the world of a political leader over the crisis.

Iceland’s top three banks all collapsed in late 2008 after years of debt-fuelled expansion. The country of just 320,000 people was forced to borrow around $10 billion from the International Monetary Fund and other lenders.

Parliament voted in 2010 to prosecute Haarde over the crisis at a special court of impeachment set up in 1905, which has never been used before. He has denied the charges. “None of us realized at the time that there was something fishy within the banking system itself, as now appears to have been the case,” Haarde told the court in opening questioning from the special prosecutor investigating crimes linked to the crisis.

Many Icelanders blame a small and closely connected group of businessmen, bankers and politicians for the crisis.

Haarde is charged with gross negligence for failing to take proper measures to prepare for an impending financial crash.

The economy has started to recover from the crisis, having borrowed on the international bond markets last year and getting its investment grade back from Fitch in February.

Bravo. Now, can we stealthily suggest to George W. Bush and Dick Cheney they should consider taking a trip to Iceland, say, for salmon fishing? Har.

As advertisers quit the Rush Limbaugh radio program — and as Republican politicians squirm uncomfortably — the broadcaster’s fans are complaining about double standards. Yes, they’ll concede, maybe Limbaugh went too far in denouncing a female law student as a “slut” and a “prostitute” and then demanding that she post a sex tape online for him to view.

But look (they continue) at all the liberal/lefty broadcasters who have also said obnoxious things! No one calls Democratic politicians to account for them. Why us?

It’s a question that will be aired often in the week ahead. Here’s the answer, in four points.

Point 1: Even by the rough standards of cable/talk radio/digital talk, Limbaugh’s verbal abuse of Sandra Fluke set a new kind of low. I can’t recall anything as brutal, ugly and deliberate ever being said by such a prominent person and so emphatically repeated. This was not a case of a bad “word choice.” It was a brutally sexualized accusation, against a specific person, prolonged over three days.

Point 2: The cases that conservatives cite as somehow equivalent to Limbaugh’s tirade against Fluke by and large did bring consequences for their authors…

The exception to the general rule is Bill Maher, who never apologized for calling Palin by a demeaning sexual epithet. But now see point 3:

Point 3: Limbaugh’s place in American public life is in no way comparable to that of David Letterman, Bill Maher or Ed Schultz…

Among TV and radio talkers and entertainers, there is none who commands anything like the deference that Limbaugh commands from Republicans: not Rachel Maddow, not Jon Stewart, not Michael Moore, not Keith Olbermann at his zenith. Democratic politicians may wish for favorable comment from their talkers, but they are not terrified of negative comment from them in the way that Republican politicians live in fear of a negative word from Limbaugh…

Instead, public life is reduced to a revenge drama. Each offense is condoned by reference to some previous offense by some undefined “them” who supposedly once did something even worse, or anyway nearly as bad, at some point in the past.

And correctly so — this is how David Frum responds like a traditional American conservative to the defense of Limbaugh by Republicans ranging from party leaders to rank-and-file hacks. 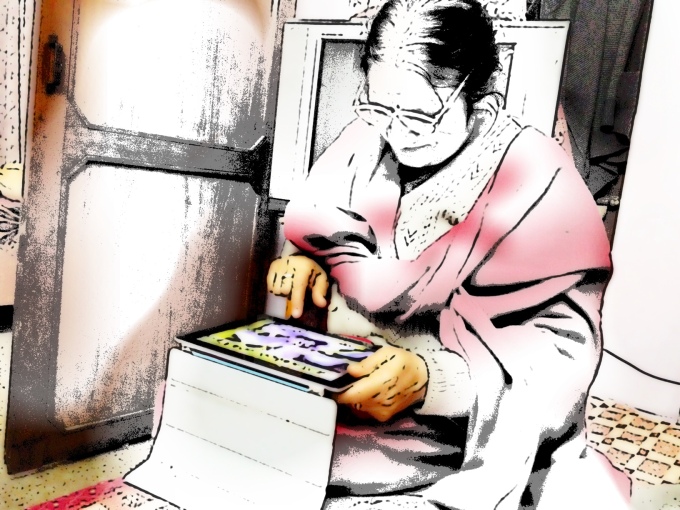 I gave my mom my iPad and she is thrilled. And while I am ready for Facetime barrage, I am not going to friend her on Facebook. More here.

PS: I used Camera+ to take the photo and ran it through the Mobile Monet app on my iPhone 4S. I did the coloring and shading to enhance the effect.

Counting Om as an online friend is one of the brightest features of my 29 years online. He’s a friend and peer of my “boss” over at the Big Blog, John C Dvorak – whence our connection stems.

His success as a tech journalist, Web empire builder, venture capitalist partner hasn’t changed a jot of his humanity and character. His personal website is comparatively undiscovered and I’m selfish enough to hope it kind of stays that way. A visit feels like having a quiet moment aside from the tech universe to have a conversation with someone you thoroughly respect.

I was originally doing this as a straight-up reblog; but, the photo was too large for my template. Now, I should really have cyberspace confused.

We first saw Volkswagen’s plug-in petrol-electric hybrid Cross Coupé concept at the Tokyo Motor Show. Now there’s a new Cross Coupé concept to be shown at the Geneva Motor Show this week that use a turbodiesel direct injection engine (TDI) and two electric motors to achieve 1.8 liters per 100 km (around 125 usmpg) with CO2 emissions of just 46 g/km.

The Cross Coupé is proof that achieving 125 mpg is not just the realm of asthmatic shopping trolleys as the 225 kW Cross Coupe has a top speed of 137 mph and a curb weight of 4,096 lb.

The article is from the UK so it notes over 150 mpg. Those are imperial gallons and I’ve converted it to US gallons.

Unfortunately, everyone who builds diesel anything still suffers from the few years that GM offered cars with the worst diesel engines ever made in the history of motor vehicles. They leaked, smoked and drove like crap. German manufacturers have slowly overcome the lousy history – and still only bring in a fraction of the diesel power they’re capable of, that demand requests.

Yes, they sell out everything they offer – but, like everyone else – they don’t have a boatload of confidence in American consumers figuring out the difference.

Anthony Garcia’s father and two girlfriends reportedly cashed those checks, $1,600 a month, and also deposited money in his jail account and that of other gang members. His father, Juan Garcia, 47, and girlfriends, Sandra Jaimez, 45, and Cynthia Limas, 25, were charged with unemployment fraud…

…It is illegal to receive unemployment benefits while in jail, according to California’s Employment Development Department, but it is unclear whether Garcia could be convicted of a fraud-related crime as the money was deposited into his account.

Garcia was charged with the murder because he had a detailed murder scene inked on his chest. A detective investigating a 2004 murder case was looking through snapshots of tattooed gang members – who are photographed with their shirts off so that police may catalogue their tattoos – when he came across Garcia’s tattoos. Garcia had been photographed after being picked up for a traffic stop.

Garcia’s tattoo spans his chest and bears the words, “RIVERA KILLS” above a liquor store lined with Christmas lights. There, John Juarez, 23, was gunned down. Rivera is a reference to the gang, Rivera-13.

Garcia was booked, and sheriff’s detectives disguised as gang members coaxed a confession out of Garcia in his cell.

Did anyone expect a scumbag to stop behaving like a scumbag because he was in jail?

Did anyone expect the scumbag’s scumbag family and firneds to stop behaving like scumbags because he was in jail?

Does anyone in LA County civil service ever check on scumbags continuing to act like scumbags?