Even after Amazon and Google put two bullets into its head earlier this year, overgrown patent troll Eolas is stumbling forward with new lawsuits against Facebook, Wal-Mart and Disney.

Eolas is a shell company that had been stomping around the country demanding companies pay it to use basic technology that lets users “interact” with the web. It suffered what looked like a fatal blow earlier this year when Amazon and other Eolas targets persuaded a Texas jury that two of its patents were invalid.

Nonetheless, Eolas has dusted itself off and filed new claims based on the same patents plus two more that are offshoots from the original patent issued in 1998. That patent…is entitled “Distributed hypermedia method for automatically invoking external application providing interaction and display of embedded objects within a hypermedia document.”

Eolas’ legal rampage led the man regarded as the inventor of the World Wide Web, Tim Berners-Lee, to testify in February that its patents should be invalid.

The troll’s activities have also proved controversial because the University of California has been its partner in the patent lawsuits. A spokesperson told Reuters, which was first to report the Facebook suit, that the school considered the patents public assets and that it “should be paid a fair value when a third party exploits that university asset for profit.”

…McKool Smith…The law firm, which has won hundreds of millions in Texas troll cases through commissions of up to 40 percent, has seen its fortunes turn in the last year.

Creeps like this prove the US Patent Office has gone from incompetent to useless and a partner in criminal conspiracies.

Though one of the cardinal requirements of this kind of theft is a patent office that knows nothing of technology, the many judges and courts cooperating in this crap are equally corrupt and fill the needs of legal extortion with their ignorance.

My nerves will never be the same, again. 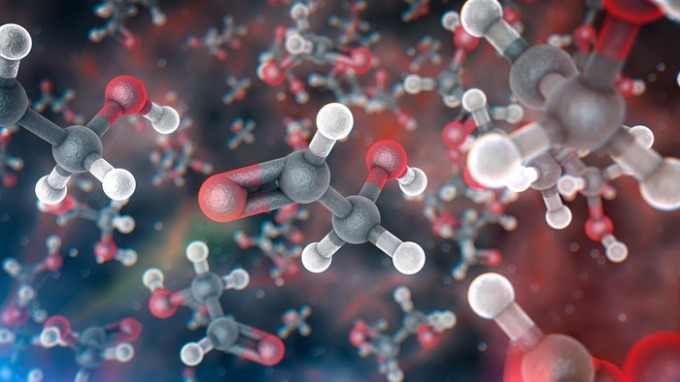 Using the latest-generation Atacama Large Millimeter Array (ALMA), which is an advanced system of 64 radio-telescope antennas in northern Chile, scientists at the European Southern Observatory have discovered a simple form of sugar orbiting a small binary star. Known as 16293-2422, that star is only 400 light-years away, and has about the same mass as the Sun. The finding could shed light on how the building blocks of life can originate spontaneously in deep space, even without a planet to support them.

The molecule found was glycolaldehyde (C2H4O2), not dissimilar to the table sugar (C12H22O11) we’re familiar with, and one of the building blocks of DNA and RNA. Glycolaldehyde has been found inside distant cloud dust as early as in 2000 but, crucially, this marks the first time that scientists have detected it in the right place and at the right time for life to blossom in its vicinity…

Most chemical reactions on Earth occur in liquid water, but in interstellar space the complex molecules appear to form on the surface of tiny dust particles. Smaller molecules such as water, formaldehyde, methane, ammonia, carbon dioxide or methanol coat the surfaces and interiors of the grains in the dust clouds. Then, when a shock wave hits the dust, it provides the energy to assemble more complex molecules (such as sugars) from the simpler ones and then free them from the dust grains.

One of the open questions on the origins of life on Earth is the mystery of how, based on our ample fossil record, life seems to have originated very shortly after the right conditions arose on our planet. This finding might help explain why, as there is mounting evidence now that prebiotic chemistry – the formation of the molecular building blocks necessary for the creation of life – occurs in interstellar clouds long before those clouds collapse to form a new planetary system.

It boggles the mind.

In the future days, which we seek to make secure, we look forward to a world founded upon four essential human freedoms.

The first is freedom of speech and expression—everywhere in the world.

The second is freedom of every person to worship God in his own way—everywhere in the world.

The third is freedom from want—which, translated into world terms, means economic understandings which will secure to every nation a healthy peacetime life for its inhabitants—everywhere in the world.

The fourth is freedom from fear—which, translated into world terms, means a world-wide reduction of armaments to such a point and in such a thorough fashion that no nation will be in a position to commit an act of physical aggression against any neighbor—anywhere in the world.

That is no vision of a distant millennium. It is a definite basis for a kind of world attainable in our own time and generation. That kind of world is the very antithesis of the so-called new order of tyranny which the dictators seek to create with the crash of a bomb.

The park — a memorial to Franklin Delano Roosevelt — was conceived four decades ago. The visionary architect who designed it died in 1974…

But in a city proud of its own impatience, perseverance sometimes pays off. Next month, on that triangular plot on the southern end of Roosevelt Island, the four-acre Franklin D. Roosevelt Four Freedoms Park will open, a belated and monumental triumph for New York and for everyone who cares about architecture and public space.

Here’s a link to the article about the history of this park.

Congressional Republicans, resolute in their commitment to deny the Democrats anything that looks like an accomplishment in an election year, have spent the week obstructing passage of the Veterans Job Corps Act of 2012. It’s a perfectly inoffensive bill from Senator Patty Murray, the Washington Democrat, meant to increase hiring and job training for veterans, especially those who served in Iraq and Afghanistan.

Who could oppose hiring more veterans as cops, firefighters and national-parks workers? Who could be against helping veterans apply their military training to earn civilian occupational licenses? The unemployment rate for new veterans hit nearly 11 percent in August, compared with 8.1 percent nationwide. Veterans and active-duty soldiers are committing suicide at alarming rates. The men and women who defend America in uniform are 1 percent of the population. Why shouldn’t the 99 percent give them a hand?

Senator Tom Coburn of Oklahoma says it is dishonorable and cowardly to help veterans find jobs when there are more important things (what?) to do…

Ms. Murray…has tried to make her bill as bipartisan as possible, by incorporating wholesale additions from Richard Burr, a North Carolina Republican. The Senate could have rallied behind this bill, shown its dedication to the troops, and been done with it by now. But Democrats will have to pass this bill the hard, slow way, with repeated large votes overcoming Republican procedural objections…Or it might be killed by Republicans committed to making a bigger point about honor, valor, sacrifice and obstruction.

There hasn’t been a bloc of cowards, bigots and liars so infesting Congress like poison maggots since the days of the House UnAmerican Activities Committee. A sleazy group of politicians about as unAmerican as they come.

The Party-formerly-known-as-Republican is out to raise the bar of those years of racism, reaction and indolence. Nothing concerns their stony little hearts more than opposing any legislation offered by our sort-of-Black president and members of his party. Even at the expense of screwing our veterans returning home to unemployment and diminished opportunities.

Opportunities diminished, I might add, courtesy of the previous batch of conservative ideologues. 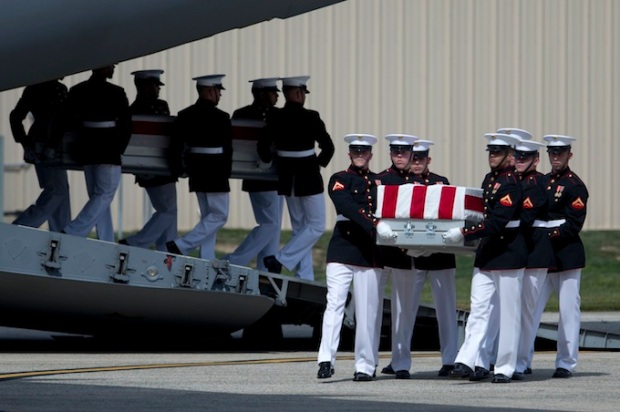 Four flag-draped coffins bearing the bodies of the Americans killed in Libya arrived in the United States on Friday for their final journey home as President Obama said the victims “laid down their lives for us all” and vowed to honor their memory by never retreating from the world.

In a solemn ceremony at Joint Base Andrews outside the capital, Mr. Obama and his national security team stood at attention as the coffins were first carried by Marine honor guards off a military plane that had flown them home from Libya and were later lifted into four hearses while a military band played “America the Beautiful.”

The arrival, broadcast live on news channels, proved an emotional culmination to an episode that has rocked Washington and American embassies around the world. Secretary of State Hillary Rodham Clinton looked stricken and seemed to be fighting to control her emotions as she and the president addressed an audience of family, friends and colleagues inside a hangar at the air base. Mr. Obama, himself somber, put his arm around her shoulders in comfort.

“Four Americans, four patriots — they loved this country and they chose to serve it and served it well,” the president said. “They had a mission, and they believed in it. They knew the danger, and they accepted it. They didn’t simply embrace the American ideal; they lived it, they embodied it.”

Also on hand for a ceremony the likes of which has been a painful ritual for Americans over the years were Vice President Joseph R. Biden Jr., Defense Secretary Leon E. Panetta, Ambassador Susan E. Rice and former Secretary of State Colin L. Powell.

When the official video is available, I’ll post a link to it. The whole ceremony was pretty moving.

Yeah – Colin Powell was the only Republican officially attending.