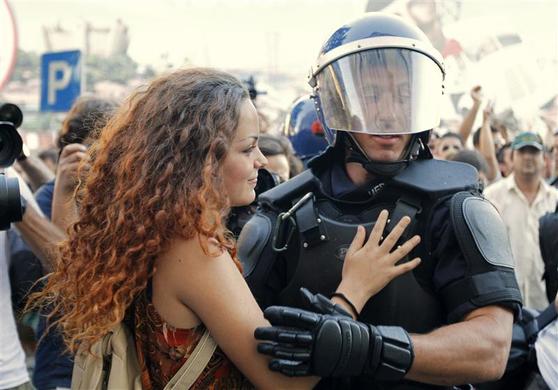 In Portugal,a young woman embarrasses a riot policeman by embracing him in front of the IMF office during a protest against austerity in Lisbon. Over 100,000 protesters marched in Lisbon and many thousands in other Portuguese cities on Saturday in against a new bout of tax hikes that has already shattered the political consensus behind austerity imposed by an EU/IMF bailout.

What a funny-looking doorbell!

David Cameron described US Presidential candidate Mitt Romney as having the “unique distinction of uniting the whole of England against him”, a Hollywood movie mogul has said.

Harvey Weinstein, an Oscar-winning producer, said he had personally heard Mr Cameron make the disparaging remarks to a group of people.

The revelation will risk inflaming tensions between Mr Cameron and Mr Romney, which could make trans-Atlantic relations difficult if the Republican wins the race.

Mr Weinstein told the BBC: “I witnessed Prime Minister saying to a group of people, myself included, that Mitt Romney had that unique distinction of uniting all of England against him with his various remarks. On behalf of my love of England, I have to support the President [Barack Obama] who is anything but making faux-pas.”

In a further diplomatic gaffe, the Republican candidate also appeared to breach protocol by disclosing that he had received an unusual briefing from Sir John Sawers, the chief of the Secret Intelligence Service (MI6), on the situation in Syria.

An adviser boasted to The Daily Telegraph that Mr Romney had also previously met the head of the Security Service (MI5).

Letting him out of doors without a handler is a bit of a problem – seeing that he relies either on guidance from the Kool Aid Party or neocon leftovers from the George W. Bush New American Century. He has a choice of nutballs or failures to guide him in foreign relations.

The gathering celebrated a cornucopia of the most extravagant facial hair from across the UK and around the world – and their fans.

An event I must support – being someone who almost didn’t appear in his high school yearbook until I relented and trimmed my sideburns.

Fortunately, that sort of stupidity has diminished in the job market in this land – over time. I have not been absent a beard since 1979.

Angela Yartz with debt collection notices from a district attorney.
She bounced a $47.95 check to Walmart

The letters are sent by the thousands to people across the country who have written bad checks, threatening them with jail if they do not pay up.

They bear the seal and signature of the local district attorney’s office. But there is a catch: the letters are from debt-collection companies, which the prosecutors allow to use their letterhead. In return, the companies try to collect not only the unpaid check, but also high fees from debtors for a class on budgeting and financial responsibility, some of which goes back to the district attorneys’ offices…A kickback for services rendered.

Consumer lawyers have challenged the debt collectors in courts across the United States, claiming that they lack the authority to threaten prosecution or to ask for fees for classes when no district attorney has reviewed the facts of the cases. The district attorneys are essentially renting out their stationery, the lawyers say, allowing the companies to give the impression that failure to respond could lead to charges, when it rarely does…

The partnerships have proliferated from Los Angeles to Baltimore to Detroit, according to the National District Attorneys Association, as the stagnant economy leaves city and state officials grappling with budget shortfalls. Lawyers for the check writers estimate that more than 1 million of them are targeted a year. The two main debt collectors — California-based CorrectiveSolutions and BounceBack of Missouri — return millions of dollars each year to retailers including Safeway, Target and Walmart…

Because the cases are not fully investigated, there is no way of knowing whether the bad checks were the result of innocent mistakes or intentional fraud. The so-called bad check diversion programs start from the position that a crime has been committed.

Where’s Charles Dickens when you need him?

You can RTFA for all the details. I imagine most folks who wander through this site already have a perception of political life in these United States that doesn’t lead you to gasp in surprise over collusion between government and private collection agencies. You could write out in advance the rationales used by district attorneys – who are marking time in office before their next run at higher office.

There is a class of rip-off common in the United States that started with storefront mortgage companies encouraging people to lie about income and expenses – to achieve the dream of home ownership when it wasn’t really affordable. Hustlers like “kindly” moneylenders offering payday loans at terms that were against the law back when credit cards were invented – legal loan sharks kept in business by politicians with the ethical standards of a weasel. Scumbags are allowed into emergency rooms by hospitals administered by beancounters who find nothing wrong with confronting someone in dire need with a lecture on your responsibilities to people who make a living from your ills and injury.

It stinks on ice. The direct result of ideology and politics that say means-testing and your ability to pay take precedence over anything else in our society. No matter that most other industrial nations have learned that running the service levels of government on the basis of need and common good not only results in higher average standards – but, that it costs less than devoting bureaucratic time to policing the lives of ordinary citizens. A more sound return on investment.

Too bad that doesn’t satisfy today’s corrupt derivatives of the Puritan ethic.

Two conservative groups asked the U.S. Court of Appeals in Washington…to allow tax-exempt organizations that pump millions of dollars into election ads in the weeks leading up to the November 6 vote to keep the names of their donors secret.

The Center for Individual Freedom and the Hispanic Leadership Fund are appealing a March federal court ruling that required the organizations, known for their tax code as 501(c) groups, to disclose previously anonymous donors if they run so-called issue ads in the weeks before the election…

The two groups ultimately want the courts to reinstate the Federal Election Commission rules protecting the names of donors. They were quashed by a lower court earlier this year in a case was brought by Democratic congressman Chris Van Hollen.

Hiding the sources of their funding is key to hiding who pays for their political corruption.

A federal court ruled in March that, in the final 60 days before the general elections and 30 days before primaries, groups running “issue ads” must reveal the identities of donors of $1,000 or more.

But leading advocacy groups have made clear they plan to carry on and have no intention of revealing their donors’ identities thanks to loopholes in the law.

Study a little history folks. This is how the worst crooks in any Western nation have always defeated attempts to institute anything more fully approximating real democracy. Secret funding for political campaigns allows the biggest phonies in Congress and state legislatures to claim they know nothing about corporate control of their campaigns. Protecting this secrecy has been one of the central goals of Republican appointments to federal judgeships and the Supreme Court for decades.

Not the same amenities as a million-dollar McMansion

When Luis Alejandro Sanz got out of prison for drug trafficking, he soon found his new criminal fortunes in Miami’s emerging cottage industry: Medicare fraud.

The convicted felon started a home healthcare company, using his wife Elizabeth as the straw owner to hide himself from authorities.

On Friday, U.S. District Judge Kathleen Williams sent Luis Sanz, 58, to prison for 10 years and Elizabeth Acosta Sanz, 45, for nine years, saying the couple made a “mockery” of the beleaguered federal program for the elderly and disabled. The Sanzes, who bought a $1.3 million West Miami-Dade home with their ill-gotten gains, paid kickbacks to recruiters and patients for services that were never provided or needed…

“Every single day, they had one purpose: to steal as much money as they could from Medicare,” Assistant U.S. Attorney Dan Bernstein told the judge. “Medicare paid because these people were good at fooling Medicare…”

“The case of Luis Sanz really encapsulates what’s been happening in Miami” since the 1990s, when many drug traffickers began gravitating to the Medicare rackets because it was seen as profitable and less risky.

Do you think that Florida voters electing a governor whose clinics set the record for a criminal fine for fraud might have given these crooks that idea? Republican Rick Scott’s firm – Columbia/HCA – paid over $2 billion fine for fraud.

Last year, Medicare adopted new measures designed to combat the failed “pay and chase” model of doling out dollars for claims, then pursuing the scammers after they have run off with the money. As part of the Affordable Care Act, Medicare received $350 million to develop stricter screening of healthcare providers and more sophisticated software for detecting fraudulent claims…

The upgrades in screening and technology came in response to massive taxpayer losses in South Florida — regarded as the nation’s healthcare fraud capital — and other parts of the country.

Yes – of course the Party-formerly-known-as-Republican opposed these changes.