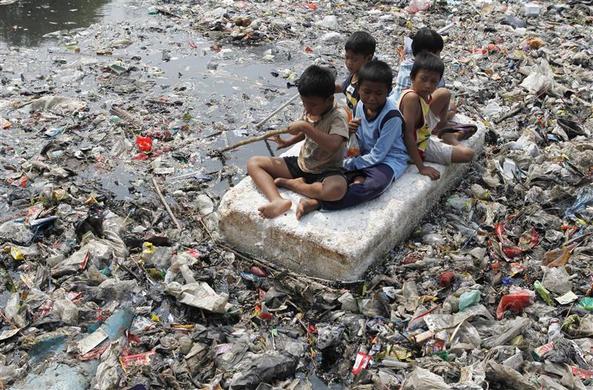 Children sitting on a makeshift raft play in a river full of rubbish in a slum area of Jakarta.

One of this week’s photos of the week at Reuters News Service.

21 Balançoires takes over a newly open space in front of Université du Québec à Montréal’s Science Faculty. Together with Luc-Alain Giraldeau, an animal behaviour professor from the faculty, we explored the topic of cooperation which states that together we achieve better things than separately.

The result is a giant collective instrument made of 21 musical swings; each swing in motion triggers different notes, all the swings together compose a piece, but some sounds only emerge from cooperation. The project stimulates ownership of the new space, bringing together people of all ages and backgrounds, and creating a place for playing and hanging out in the middle of the city centre.

We owe the musical interpretation of this playful experiment to composer Radwan Ghazi-Moumneh.

Now, do you think the lawyers on retainer to whichever city you live in would allow this?

When the news of Mitt Romney’s Florida video broke on Monday evening, I was incensed — but not for its political implications. His arrogant and out-of-hand dismissal of half the population of this country struck me at a visceral level, for it sullied the religion that he and I share — the religion for which five generations of my ancestry have lived and sacrificed, the religion whose official mantra is “to take care of the poor and needy throughout the world.”

My first impulse was to rent an airplane towing a banner: “Mitt Romney is Not the Face of Mormonism!”

I was a supporter of Romney 1.0. That was in late 2007, when we had far more in common. We are both Mormons and we both served foreign missions for our church at the same time, he in France and I in Brazil. Some of my best friends had been some of his best friends for decades. Although I am a registered Democrat, his accomplishments as Governor of Massachusetts appealed to me. I contributed the maximum amount to his early presidential primary bid…

Early in 2008, to my dismay, Romney 1.0 became Romney 2.0 by moving far enough to the right to lose my support. He has kept moving ever farther to the right. He has made this move in a successful attempt to gain the nomination, and in an ongoing attempt to persuade no more than 53 percent of the country that he should be the next President.

…That he is the only Mormon ever to be the nominee for the Presidency of a major political party makes it inevitable that even if people do not judge him because of his religion, they will judge his religion because of him. Given the unfolding news of this week, I regret to say that Mitt Romney is not the face of Mormonism.

…The face of Mormonism is the one that calls on some of its members, particularly bishops and stake presidents, to devote as many hours gratis to their church jobs as they do to their professional jobs. It is the one that summons up extraordinary acts of love, compassion and generosity, often in response to the deepest tragedies of life — and death.

But it is not the one that dismisses out-of-hand half the population of the United States by saying, “My job is not to worry about those people. I’ll never convince them they should take personal responsibility and care for their lives…”

The very basis of Mormon community, stretching back to the earliest years of Mormonism nearly two centuries ago, is that the more able have a sacred obligation to assist the less able…

Judge Mitt Romney as you will, and vote for or against him as you will; but do not judge Mormonism on the basis of the Mitt Romney that was unveiled to the public this week. He is not the face of Mormonism.

Well said, Gregory Prince. A leading Mormon scholar, a historian who puts a generational persona on the dialectic stream that becomes the present – Prince stands up for the values that formed this religion like many other Christian religions. Love, kindness and aid for your fellow human beings.

Romney behaves like the princes of today’s Catholic Church or the Bible Belt hustlers who sell religious cred through their universities, pre-recorded prayers and genuine virgin acrylic bubba hats. He demeans the reasons believers want to believe. He’d rather they were True Believers. Unquestioning. Bigoted. Stuck in the past that never was.

He is the face of Mammon – not Mormon.

The International Children’s Peace Prize 2012 was presented to Kesz (13) from the Philippines at the Ridderzaal in The Hague today. Of the three nominated children, who have all made extraordinary efforts in the area of children’s rights, the Expert Committee selected Kesz as the winner. He was awarded the prize by Nobel Peace Prize winner Desmond Tutu.

Kesz received this award for his efforts to improve the rights of street children in the Philippines, where more than 246,000 street children are subjected to abuse, violence and child labour. Many of them also struggle to cope with major health issues. Kesz was in the same situation. He was severely abused and forced to scavenge at the dumpsite at the age of two. Three years later, he sustained burns on his arm and back, which forced him to run away and look for help. He has transformed his own experiences into a drive to help other street children and inspire them to change their own lives…

For his seventh birthday, Kesz didn’t want any presents for himself. Instead, he wanted to give something to other street children: Gifts of Hope. That same year, Kesz started his own organization, Championing Community Children, aimed at giving street children hope and showing them that they can take their future into their own hands. Every week, he and his friends go to underprivileged communities to teach children about hygiene, food and children’s rights. He even takes things a step further, by teaching children how to teach each other. He has so far helped more than 10,000 children in his local area…

Kesz was presented with the prize by Desmond Tutu, the patron of KidsRights and the International Children’s Peace Price. According to Tutu, Kesz is a deserving and inspiring example of “a new voice for the voiceless”. Kesz was presented with the Nkosi, a unique sculpture which shows how a child can move the world. The sculpture symbolises the impact of the International Children’s Peace Prize…

Akin’s screwed-up website – “I’m a women and I support Todd!”

When it comes to women, Republican Todd Akin just can’t seem to get it right.

On Tuesday, the St. Louis Post-Dispatch reported that the Missouri Senate candidate’s campaign was forced to take down its “Women for Akin” site after the paper pointed out that one of the women in the prominent photo was not a supporter of Akin, and, in fact, worked on behalf of his opponent, incumbent Sen. Claire McCaskill.

The website featured a photo of Akin standing with his wife and two women, but one of the women was Corinne Matti, a tracker for the state’s Democratic Party.

But that wasn’t the only mistake. Text to the right of the photo read, “I’m a women and I support Todd.”

Of course, “women” should be the singular “woman…”

This isn’t the first embarrassing mistake the campaign has made on its website. Just days after Akin’s comments, the campaign misspelled “you’re” twice when asking supporters to “tell McCaskill that your standing with Todd Akin.”

This idiot is gullible enough to believe all sorts of rural myths about women and their bodies, their rights, their ability to stand up and run their own lives. He deserves to be relegated to the cobweb farm in the back of Mitt Romney’s closet for old money.