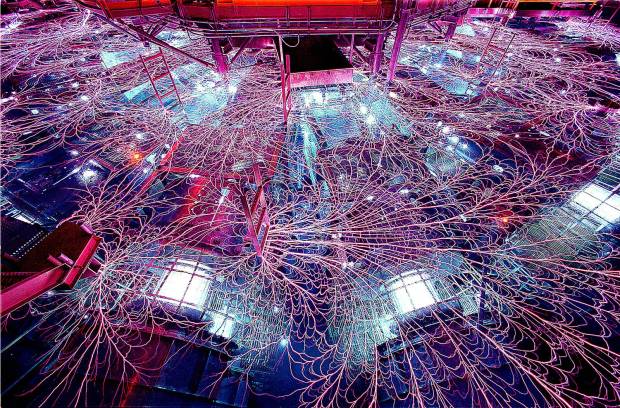 Magnetically imploded tubes called liners, intended to help produce controlled nuclear fusion at scientific “break-even” energies or better within the next few years, have functioned successfully in preliminary tests, according to a Sandia research paper…

To exceed scientific break-even is the most hotly sought-after goal of fusion research, in which the energy released by a fusion reaction is greater than the energy put into it — an achievement that would have extraordinary energy and defense implications.

That the liners survived their electromagnetic drubbing is a key step in stimulating further Sandia testing of a concept called MagLIF (Magnetized Liner Inertial Fusion), which will use magnetic fields and laser pre-heating in the quest for energetic fusion.

In the dry-run experiments just completed, cylindrical beryllium liners remained reasonably intact as they were imploded by huge magnetic field of Sandia’s Z machine, the world’s most powerful pulsed-power accelerator. Had they overly distorted, they would have proved themselves incapable of shoveling together nuclear fuel — deuterium and possibly tritium — to the point of fusing them. Sandia researchers expect to add deuterium fuel in experiments scheduled for 2013.

A later simulation, published last January in PRL by Sandia’s Steve Slutz and Sandia researcher Roger Vesey, showed that a more powerful accelerator generating 60 million amperes or more could reach “high-gain” fusion conditions, where the fusion energy released greatly exceeds (by more than 1,000 times) the energy supplied to the fuel…

Sandia researchers intend to test the fully integrated MagLIF concept by the close of 2013.

RTFA for all the technical details. Interesting stuff.

I don’t understand it well enough to scare myself – but, I’m confident there are a few folks around who feel that any “oops” moment in this research will leave a very large hole where Albuquerque used to be.