Have a high holiday!

They were marijuana plants, row after row over an area the size of two football fields near Stoney Island Avenue and 105th Street.

“We had the right altitude and the right angle, the right sunlight and happened to be glancing down,” said Graney, a tactical flight officer for the sheriff’s department.

He and the helicopter pilot, Chicago police officer Stanley Kuprianczyk, spotted the pot around noon Tuesday and narcotics officers moved in to secure the area.

“The plants are pretty big. They’re as big as Christmas trees,” Chicago police Lt. Michael Ryle said. “Some of the plants are as tall as 10 feet tall…”

People are doing this absolutely everywhere!

The fabled Viennese fondness for fine funerals and “a schoene Leich” – a beautiful corpse – is about to get a modern twist.

Digital technology is about to give Austrian gravestones the potential to speak across time by showing pictures and biographies of the people buried below.

All you need is a smartphone equipped with a scanner to read the so-called “quick response” (QR) codes, the square of squiggles already widely used in advertising campaigns to unlock a trove of information for the curious.

The first QR codes will start appearing on graves in Austria within weeks, said Joerg Bauer, project leader for Austrian bereavement company Aspetos, who has been working on the QR project for five years.

Bauer said cemetery visitors could even view videos if connection speeds were high enough, although he frowned on the prospect of disturbing others with loud music…

The codes – first developed in Japan to track car parts in the 1990s – may eventually link music fans with the lives of legendary composers like Beethoven and Mozart enshrined at Vienna’s central cemetery, he said, although local officials say there are no immediate plans for this…

The deployment of QR codes on gravestones has taken off more slowly, perhaps due to privacy concerns of grieving families, but has gained momentum in Japan and is also being experimented with in the United States, Britain, Australia and Germany…

They certainly are being deployed everywhere. I had a choice of 124,000 results searching an image on Google.

A fragment of a child’s skull discovered at Olduvai Gorge, Tanzania shows the oldest known evidence of anemia caused by a nutritional deficiency, reports a new paper published in PLOS ONE…

The discovery, made by a global team of researchers led by Manuel Domínguez-Rodrigo from Complutense University, Madrid, suggests that early human ancestors began eating meat much earlier in history than previously believed. The skull fragment identified is thought to belong to a child somewhat younger than two and shows bone lesions that commonly result from a lack of B-vitamins in the diet.

Previous reports show that early hominids ate meat, but whether it was a regular part of their diet or only consumed sporadically was not certain. The authors suggest that the bone lesions present in this skull fragment provide support for the idea that meat-eating was common enough that not consuming it could lead to anemia.

Nutritional deficiencies such as anemia are most common at weaning, when children’s diets change drastically. The authors suggest that the child may have died at a period when he or she was starting to eat solid foods lacking meat. Alternatively, if the child still depended on the mother’s milk, the mother may have been nutritionally deficient for lack of meat.

Both cases imply that “early humans were hunters, and had a physiology adapted to regular meat consumption at least 1.5 million years ago,” say the authors.

All this speaks to is how human beings evolved. There weren’t too many heavy philosophical discussions of nutrition and appropriate sources at that level of evolution. The quest for scarce goods predates slave economies with sustenance central. Frankly, I doubt if the topic came up even at the level of agriculture sufficiently advanced for one person – a slave – to produce enough to keep them alive and have a surplus remaining for the common good.

Which is why I’m never surprised when researchers into earliest days of hominids discover something else that we consumed a bit earlier than previously accepted. We’re omnivores, folks. We evolved because we weren’t picky eaters. If we could catch it, kill it, take it away from some other critters – we ate it.

Backer of Democrats and hedge fund billionaire James H. Simons jumps to No. 8 on The Center for Public Integrity’s list of top donors to super PACs, surpassing his former protégé,GOP supporter Robert Mercer, who ranks No. 9.

Democrats also came up with a counter to pro-Republican homebuilder Bob Perry (No. 3), who backed efforts in Texas to pass laws that lower jury verdicts. Husband-and-wife trial lawyers Steve and Amber Mostyn, also of Texas, make their first appearance on the list at No. 10.

Get detailed profiles on all and view “trading cards” of this election’s biggest super PAC donors.

Folks at the Center for Public Integrity get nothing but kudos from me. They work diligently at some of the most boring data mining possible – dedicated to turning up decisions, behavior based on what passes for ethical standards in our political life. Practically mutually-exclusive terms, nowadays.

The Mitt Romney/Barack Obama debates are finally here – which means it’s time for the 2012 Presidential Debate Drinking Games! So stock up on your favorite beverages, follow us on Twitter and check back here before each debate to drink along with us.

These were the rules for last night – Debate #1

Select a candidate to drink to:

It doesn’t have to be the person you plan to vote for – in fact it’s often more fun if it isn’t. If you are at a party, try assigning candidates randomly to the guests.

If you are drinking to Barack Obama: the words may include millionaires, let me be clear, General Motors, middle class

If you are drinking to Mitt Romney: the words may include unemployment, ObamaCare, job creators, private sector

You can participate and socialize on Twitter with other players…and check back in a couple days for details on the Biden/Ryan – Vice Presidential Debate Drinking Game!

What TV pundits could possibly offer this much chemical aid to survive American politics. 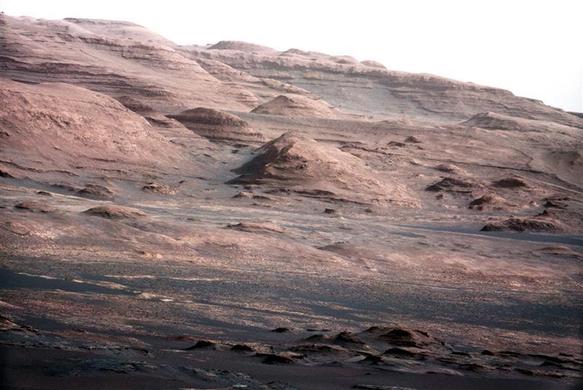 The base of Mars’ Mount Sharp – the rover’s eventual science destination – is pictured in this August 27, 2012 photo taken by the Curiosity rover. The image is a portion of a larger image taken by Curiosity’s 100-millimeter Mast Camera on August 23. Scientists enhanced the color to show the Martian scene under the lighting conditions we have on Earth, which helps in analyzing the terrain.

Click on the photo to start through the series.