“We use different varieties depending on the year,” said Erik Smith, a graduate student and member of the Student Association of the Geneva Experiment Station (SAGES). “Our main varieties this season were Empire and Crispin. Empires are quite sweet while Crispin tend to be more acidic, so combining the two makes for a nice balance of flavors.”

The student-made cider has become a popular autumn offering at NYSAES, and the students’ biggest concern this year was making enough to meet the demand.

“The unusual spring weather did affect the crop,” said Smith. “There weren’t as many apples, and the quality of those we had to pick from wasn’t what it usually is.” But thanks to donations from the programs of Kerik Cox, associate professor of plant pathology, and Herb Cooley, food science technician, the students stockpiled enough for the year’s pressings.

One thing that sets the students’ cider apart is how fully local it is. Not only are the apples grown and harvested at NYSAES, but some of the varieties used were first developed by Cornell apple breeders. The Empire apple, developed in 1966, is one of 66 Cornell-developed varieties and one of the most successful varieties ever released by the station.

Even the pasteurization process is homegrown. The ultraviolet pasteurization technique the students use was developed at NYSAES by Randy Worobo, associate professor of food microbiology, and his lab members as an alternative to thermal pasteurization…

“For me, this is a way of giving back to the community,” said Smith. “Most of us are studying in Geneva for only a short time, but we want to be able to call it home. Since so much of the region’s economy depends on agriculture, we’ve decided to lend a hand to students who’ve chosen agriculture as a career. Plus, our cider tastes great.”

My kind of university. Rooted in the community. Serving humanity.

For many in the US, a first Volkswagen will be either a Jetta or Passat, both of which have pretty good trunks. But we just drove this all-new seventh generation Golf and it needs to be on that same consideration list because it is a nearly perfect, sensibly sized trunkless car…

But this Golf VII, introduced in September at the Paris Motor Show, is an all-new car, even though from the outside things look strictly evolutionary. The chief ingredient in making true this claim of being “all-new” is the use of a completely reworked architecture called MQB, which stands for Modularer Querbaukasten, or “modular transverse matrix.” New architectures for any company signify shockingly massive investments, and therefore the damned things had better be really good for the bottom line. In the case of MQB, company leaders estimate the price tag for its four years of development totals $65 billion, so the intent is that MQB will stick around for at least a decade before a replacement architecture is even talked about…

Making certain it earns its keep quickly, VW Group has announced that MQB will be used on everything with transverse engines coming from VW, Audi, Seat and Škoda, ranging from models the size of the next VW Polo on up to the next Passat – that is to say, a major percentage of all cars produced within VW Group. So far, we’ve driven MQB with the new Audi A3, and now here with the four-door Golf Mk VII.

For this event, we picked the upgraded 146-horsepower 2.0 TDI Golf in its top European Highline trim using an optional six-speed DSG dual-clutch automatic with shift paddles. At this launch event, the TDI motor we chose was available alongside a revamped 138-hp 1.4 TSI gas engine with Active Cylinder Technology, but the latter is not on call for US deliveries, so we took the global diesel route…

END_OF_DOCUMENT_TOKEN_TO_BE_REPLACED

In the United States, about 30 billion robocalls…are placed each year, and similar conditions hold across much of the world. In the U.S. and many other countries, most commercial robocalls are illegal.﻿ As part of an ongoing campaign against these illegal robocalls, the U.S. Federal Trade Commission (FTC) is launching its Robocall Challenge, seeking a solution that blocks illegal robocalls on cell phones and on landlines. It is offering a $50,000 cash prize for the best practical solution…

…Robocalling is very popular with a certain class of marketers whose services or products usually teeter on (or fall off) the border between misleading information and scams. The number of such calls…has skyrocketed with advances in technology, and government agencies are receiving huge waves of protests and complaints from their beleaguered citizens.

This has prompted the FTC to resort to using an innovation challenge for the first time. Hosted on Challenge.gov, it joins other government-sponsored challenges designed to empower the public to bring their best ideas and talent to bear on our nation’s most pressing issues. The FTC Robocall Challenge is free to enter and open to the public, and also to companies having ten or fewer employees. Entries will be accepted until January 17, 2013…If a winning solution is identified, the FTC will announce the winner(s) early next April.

Calling all geeks. There probably are high school students who can come up with reasonable solutions to this question. That’s just the start. How about some unemployed coder who couldn’t afford to move to Silicon Valley or NYC? 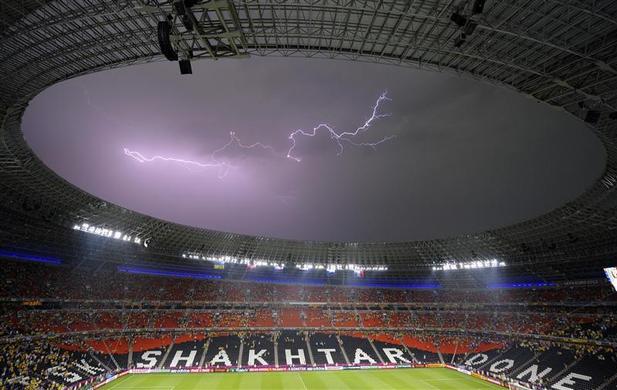 Lightning above the Donbass Arena during the match Ukraine vs France in Donetsk, June 2012

The slideshow in remembrance of his work is here.

Remembering him at the Reuters Photography Blog is over here.

One of the best, especially at proper football.

The vote was hailed as a watershed moment by gay rights activists. While same-sex unions have been legalized in six states and the District of Columbia by lawmakers or courts, voters had consistently rejected doing so. Voters in more than 30 states have approved constitutional bans on gay marriage.

“We made history and sent a powerful message that we have truly reached a tipping point on gay and lesbian civil rights in this country,” said Brian Ellner, head of the pro-gay marriage group The Four. “By winning for the first time on marriage at the ballot box, we made clear what national polls already show — that Americans support fairness and equality for all families.”

Voters in Minnesota rejected a proposal that would have defined marriage solely as a heterosexual union. The constitutional amendment failed 48 percent to 52 percent…

The constitutionality of restricting marriage to unions between a man and a woman is widely expected to be taken up by the U.S. Supreme Court soon.

That’s when we get to see if the Conservative’s Supreme Court remembers anything about civil rights applying to all Americans?

Mark Verge has been perfecting the art form for more than 16 years and has created a 39ft life-size replica of a Tyrannosaurus Rex out of 1,400 balloons.

It was just one of the sculptures made by the model-maker along with a triceratops, spinosaurus, stegasaurus and utahraptor for his show in Ontario, Canada.

Mr Verge, 43, who is originally from Nova Scotia, first started making balloon animals in 1995 after coming across a book about the hobby.

Since then he has developed his own techniques and uses a variety of different-sized balloons to build the delicate creations. It was his collection of fossils that first gave him the idea to make model dinosaurs.

His sculpture of the T Rex won Mr Verge first prize in the world balloon-sculpting competition.

He said: ‘I love fossils so over time it just occurred to me that I could make a full-size dinosaur skeleton.