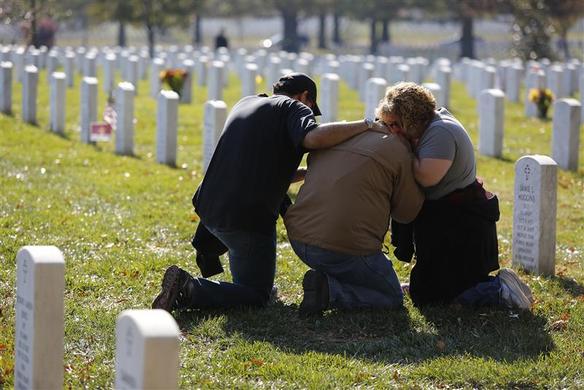 I remember my dearest friend – gone, now, a number of years – who was the most decorated soldier from our home state in World War 2.

Returning home, he had sixteen months or so in hospital to reflect on war. And when both political parties asked him to run for office after he got back on his feet – he told them he only required one plank in his platform. Corporations would be limited to no profits from their support of any war.

They withdrew the request.

Gillard made the announcement on Monday in the wake of claims by a senior policeman that a Catholic Church in the Hunter Valley in New South Wales destroyed evidence and silenced investigations.

“There have been too many revelations of adults who have averted their eyes from this evil,” Gillard said. “I believe in these circumstances that it is appropriate for there to be a national response through a royal commission…”

Gillard had been under growing pressure to establish a national inquiry after the recent allegations but she said the probe would be broader than just the Catholic Church.

“This is not a royal commission targeting any one church,” Gillard said…

In early November, a senior police investigator…alleged that the church had covered up sexual abuse of children in the Hunter Valley, just north of Sydney, to protect paedophiles and its own reputation.

Detective Chief Inspector Peter Fox said it was his experience that the church not just covered up, but silenced victims, hindered police, alerted offenders, destroyed evidence and moved priests to protect the church…

“These are insidious, evil acts to which no child should be subject,” she told reporters in Canberra.

Gillard said she did not yet know how far back the commission would investigate. She commended victims for speaking out.

Overdue. Long justified. Something you cannot count on churches to do on their own.

But, then, self-policing usually concerns itself more with “self” than “policing”.

Back during the late unlamented era after the Supremes installed W in the White House, it was common to hear assertions from the Beltway types to the effect that the effectiveness of the Bush political campaign demonstrated that the Bush team had the competence needed to run the country.

This was completely wrong-headed; many of the skills needed for campaigning have nothing whatsoever to do with governing. Smearing your opponent, flattering the news media, and suppressing the vote may work fine against hapless Democrats (back then they really were hapless in a way they no longer are); they’re no use at all in dealing with foreign governments and a troubled economy.

Yet there are some skills that do apply to both campaigning and governing — above all, an ability to face up to reality. And this, we’re now learning, was a skill that the Romney campaign utterly lacked. At least if postmortems are to be believed, they drank their own Kool-Aid, “unskewing” the polls and thus failing to understand what anyone reading Sam Wang, Drew Linzer, or Nate Silver knew.

Now, it’s one thing to do this and misjudge the prospects of rival American candidates. But suppose Romney had somehow ended up winning, and made the same kind of misjudgement of, say, Iran or al Qaeda — or of the economic outlook. Living in a bubble of conservative denial can lose much more than an election if it becomes a style of governing.

And look, we’ve already seen that play. Remember the Bush administration’s state of denial over the failing occupation of Iraq? (We were supposed to be welcomed as liberators, and the Bushies were the last to realize that it wasn’t happening). Remember how Bush’s aides ended up making a DVD of Katrina coverage to get his attention and convince him that Brownie wasn’t actually doing a heckuva job?

So this time the campaign was indeed an indicator of fitness to govern. Romney wasn’t ready, and neither was his party.

Bush came through his re-election [an affirmation of Confederate gullibility] prattling about political capital and how he deserved to spend it. The media barons lapped it up – as did most of Congress. The rest of us were reasonably distracted watching the 2nd Fall of Iraq and preparing for the collapse of the incredibly corrupt greed-bubble that resulted in the Great Recession.

So, Bush and the Republicans wrapped themselves in the incantations of Grover Norquist, Kool Aid drinkers became the Tea Party [along with millions in cash from industrial pigs] and almost everything that might be done to restore order to a broken economy was diminished before it began.

Anyone who pays attention to the same crowd – now that they’ve been thoroughly discredited and defeated – is a fool. The line forms on the Right.

Peanut allergies are rising among American children and one reason might be due to economic status. According to a new study presented at the American College of Allergy, Asthma and Immunology (ACAAI) Annual Scientific Meeting, greater rates of peanut allergy are found in families with higher economic status. This supports the “hygiene hypothesis” of many allergists.

This theory believes that a lack of early childhood exposure to germs increases the chance for allergic diseases. Over sanitization might suppress the natural development of the immune system.

“Overall household income is only associated with peanut sensitization in children aged one to nine years,” said allergist Sandy Yip, M.D., Major, USAF, lead study author and ACAAI member. “This may indicate that development of peanut sensitization at a young age is related to affluence, but those developed later in life are not…”

“While many children can develop a tolerance to food allergens as they age, only 20 percent will outgrow a peanut allergy,” said allergist Stanley Fineman, M.D…. “It’s important that children remain under the care of a board-certified allergist to receive treatment.”

According to the ACAAI, peanut allergy affects an estimated 400,000 school-aged children. It is one of the food allergens most commonly associated with sudden and severe reactions such as anaphylaxis. While avoiding peanuts may not be as difficult as avoiding wheat, there is often the risk of cross-contamination by food manufacturers.

I have long subscribed to my grandma’s medical advice – you can get sick from being too clean.

The re-election of President Obama, preceded by the extraordinary damage done by Hurricane Sandy, raises a critical question: In the coming years, might it be possible for the United States to take significant steps to reduce the risks associated with climate change?

A crucial decision during Ronald Reagan’s second term suggests that the answer may well be yes. The Reagan administration was generally skeptical about costly environmental rules, but with respect to protection of the ozone layer, Reagan was an environmentalist hero. Under his leadership, the United States became the prime mover behind the Montreal Protocol, which required the phasing out of ozone-depleting chemicals.

There is a real irony here. Republicans and conservatives had ridiculed scientists who expressed concern about the destruction of the ozone layer. How did Ronald Reagan, of all people, come to favor aggressive regulatory steps and lead the world toward a strong and historic international agreement?

A large part of the answer lies in a tool disliked by many progressives but embraced by Reagan (and Mr. Obama): cost-benefit analysis. Reagan’s economists found that the costs of phasing out ozone-depleting chemicals were a lot lower than the costs of not doing so — largely measured in terms of avoiding cancers that would otherwise occur. Presented with that analysis, Reagan decided that the issue was pretty clear.

Much the same can be said about climate change. Recent reports suggest that the economic cost of Hurricane Sandy could reach $50 billion and that in the current quarter, the hurricane could remove as much as half a percentage point from the nation’s economic growth. The cost of that single hurricane may well be more than five times greater than that of a usual full year’s worth of the most expensive regulations, which ordinarily cost well under $10 billion annually. True, scientists cannot attribute any particular hurricane to greenhouse gas emissions, but climate change is increasing the risk of costly harm from hurricanes and other natural disasters. Economists of diverse viewpoints concur that if the international community entered into a sensible agreement to reduce greenhouse gas emissions, the economic benefits would greatly outweigh the costs…

The electricity sector is responsible for more than a third of greenhouse gas emissions in the United States. In this domain, any regulations must be carefully devised, as they were in the case of fuel economy, to ensure that they do not impose unjustified costs, especially in an economically difficult period. But just as in that case, it should be possible to work with affected companies to identify flexible and cost-conscious approaches, producing reductions while minimizing regulatory burdens…

For those who seek to reduce the risks associated with climate change, it is ironic but true that the best precedent comes from a conservative icon. The big question now is whether today’s Republicans will follow Reagan’s example.

Of course, the good professor has his pointy head up his butt when it comes to characterizing progressives – especially enviros – as refusing cost-benefit analysis. It’s one of the most boring areas of expertise often over-utilized by today’s activists. The only time it gets problematical is when the folks I fondly refer to as the “New Age Left” get carried away, applying great quantities of ersatz maths to condemn cuckoo farts as critical to reducing carbon emissions.

You know what I mean.

Still, if Professor Sunstein thinks he can convince, say, Darrell Issa or Mitch McConnell to peek at the reams of spreadsheets and computerized projection that scientists have been offering for the last dozen years and more – more power to him. I’m only interested in future generations being able to enjoy life on this planet as much as I have. Perhaps more.

A centenarian couple who have been married for 88 years have finally had their wedding photos taken. Wu Conghan, 101, and his wife Wu Sognshi, 103, married in 1924, and have been together for almost nine decades. When they got married there wasn’t the option to have photos taken and it is something they have dreamt of having ever since. Recently their dream was made reality by a local photo company in Nanchong, Sichuan Province, China, and the pair posed in their wedding finery for the shots.