A devastating storm like Sandy can bring out the crooks – and not just opportunistic looters and burglars.

Officials dealing with the destruction in the U.S. Northeast say one of their biggest headaches is debris-removal fraud committed by greedy contractors who inflate their share of the millions in cleanup funds doled out by federal agencies.

But new digital technology created by private companies and municipalities in the wake of Hurricanes Katrina and Irene is making it much easier to stop firms from overcharging by claiming they have trucked away more wreckage than they have. 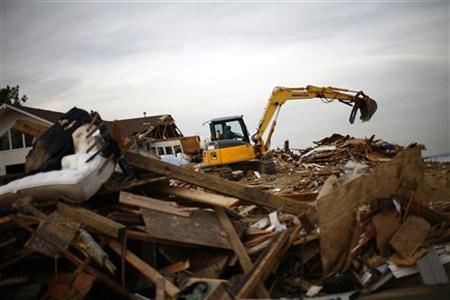 As Superstorm Sandy raced up the U.S. eastern seaboard in late October, Nassau County official Ray Iovino began researching a more efficient system to document the massive damage he expected, and found DebrisTech, a Mississippi debris-removal company whose chief executive, Brooks Wallace, was himself a victim of fraud after Katrina devastated the U.S. Gulf Coast region in 2005…

Wallace, an engineer, began thinking about how to avoid a repeat of that hurricane cleanup experience. He spent $60,000 developing custom software to digitally track debris trucks with barcode scanners, digital photos and global positioning systems. That data would then be wirelessly uploaded to a central database.

DebrisTech, one of a handful of private companies using the digital tracking software, leases out iPads loaded with its software to municipalities for $12 per device per day. Nassau County leased about 100 of DebrisTech’s 120 devices, Iovino said.

The software also maps the locations of downed or removed trees using GPS coordinates. Iovino has plotted the GPS coordinates of each of the county’s 2,641 downed trees – a figure Iovino expects to rise to 5,000 by the time the cleanup is finished – onto a digital map of Nassau in the county’s emergency operations center…

“I’ve been in debris-removal projects all over the country – Florida, California, Texas, Virginia – huge hurricanes, wildfires, floods,” said Russ Towndrow, a former Mississippi Emergency Management Agency official who has used the DebrisTech software. “This real time data is a game-changer,” he said.

RTFA. Fraud is always a significant part of disaster recovery. Scumbags will come from all over the hemisphere to get in on hustling citizens and government trying to survive a terrible event like superstorm Sandy. Now – just like the data mining protocols built into Obamacare – geek are making it lot easier to track down these thugs.