There’s a bloody row brewing in Westminster as restaurants hit back at council attempts to control the way burgers are served.

Earlier this week it was revealed that Westminster council are to launch routine health and safety inspections in a huge crackdown on rare burgers.

The council denied banning restaurants from serving “bloody burgers”, but insisted it was taking the matter of undercooked meat in restaurants “seriously”…

Jessie Newton, who works at Lucky Seven in Westbourne Park Road said: “We have always offered rare burgers because we are confident in the way we cook them”.

“Our regular customers know exactly how they like them and come back again and again. It seems pointless to turn them away, and I hope we don’t have to,” she added.

Confusion over the nature of the council’s controls has already led some of the capital’s best burger restaurants to refuse to serve customers gourmet bloody burgers for fear of reprisal.

A spokesman from Joe Allen’s in Exeter Street said: “We are serving our burgers well done at the moment. This is what we have been advised.”

James Armitage, Westminster City Council’s food health and safety manager, said: “This is not about banning under cooked burgers. This is about making sure customers are eating meat that is not a threat to their health.

“It is possible to produce burgers that can be eaten under cooked but strict controls are necessary for this,” he added.

He went on: “We have enlisted the UK’s top expert on E. Coli, Professor Hugh Pennington, to get this matter resolved and he has already outlined that rare minced meat which is not correctly cooked and prepared can kill…

Taking the question back to sanitary surroundings, appropriate standards for cleanliness and processing of foodstuffs – which should be covered by existing regulations. Enforce the laws you have and quit the nanny state blather.

There should be greater concern over the processed crap sold in supermarkets – trucked around the nation as if it was plastic dog food.

“Although we and others have created primitive biological pacemakers before, this study is the first to show that a single gene can direct the conversion of heart muscle cells to genuine pacemaker cells. The new cells generated electrical impulses spontaneously and were indistinguishable from native pacemaker cells,” said Hee Cheol Cho, PhD., a Heart Institute research scientist.

Pacemaker cells generate electrical activity that spreads to other heart cells in an orderly pattern to create rhythmic muscle contractions. If these cells go awry, the heart pumps erratically at best; patients healthy enough to undergo surgery often look to an electronic pacemaker as the only option for survival…

But the Cedars-Sinai researchers, employing a virus engineered to carry a single gene (Tbx18) that plays a key role in embryonic pacemaker cell development, directly reprogrammed heart muscle cells (cardiomyocytes) to specialized pacemaker cells. The new cells took on the distinctive features and function of native pacemaker cells, both in lab cell reprogramming and in guinea pig studies.

More studies ready to go on the safety and effectiveness of the procedure. Then, human volunteer trials. Hope for lots of folks. 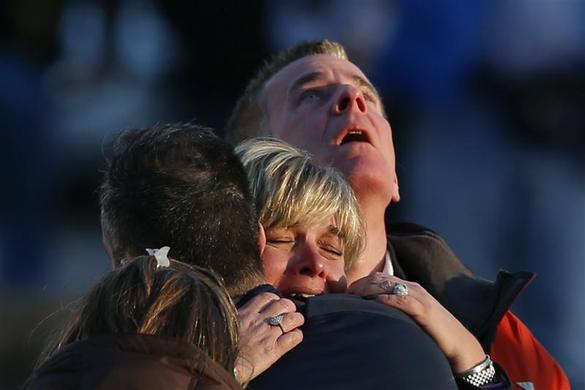 The families of victims grieve near Sandy Hook Elementary School, where a gunman opened fire on school children and staff in Newtown, Connecticut on December 14, 2012.

Mayor Michael R. Bloomberg of New York, a leading voice for gun control, all but demanded on Sunday that President Obama confront the prevalence of guns in the nation after a shooting rampage at an elementary school in Connecticut.

“It’s time for the president to stand up and lead,” Mr. Bloomberg, an independent who endorsed Mr. Obama for re-election, said during an appearance on “Meet the Press” on NBC. “This should be his No. 1 agenda. He’s president of the United States. And if he does nothing during his second term, something like 48,000 Americans will be killed with illegal guns” in the next year.

Mr. Bloomberg noted that he had given his sought-after endorsement to the president because he agreed with his views on matters like gun control. But in blunt terms, the mayor said he now expected more from Mr. Obama.

“The president has to translate those views into action,” he said. “His job is not just to be well-meaning. His job is to perform and to protect the American public.”

Mr. Bloomberg was among an array of elected officials who appeared on the Sunday morning talk shows, to express sadness and shock over the killings at Sandy Hook Elementary School in Newtown — and discuss the need to strengthen to the nation’s gun laws.

Advocates for gun rights were noticeably absent among the television guests. David Gregory, the host of “Meet the Press,” noted that the show invited “31 pro-gun rights senators” to join in the discussion. “We had no takers,” he said.

In a separate appearance on “Meet the Press,” Senator Dianne Feinstein, Democrat of California, said she would begin pushing her colleagues in Congress to pass an assault-weapons ban in the coming weeks.

“I’m going to introduce in the Senate, and the same bill will be introduced in the House — a bill to ban assault weapons,” Ms. Feinstein said.

Democrats have repeatedly failed in their efforts to pass an assault-weapons ban in Congress since a law prohibiting such weapons expired in 2004. In fact, Ms. Feinstein called for a renewal of the ban earlier this year after another deadly mass shooting, in a movie theater in Aurora, Colo.

As much as any NRA member I have legitimate fears for my 2nd Amendment rights. After all, I supported the right of Black folks, civil rights activists, arming themselves for self-defense against racist attacks. Something that could come from racist cops as easily as any civilian Klan member. I owned guns then, as now. That’s enough to get me on some kind of Homeland Security watch list.

Still. I support the range of measures proposed by Mike Bloomberg to qualify anyone for gun ownership. Not that I trust government bureaucrats; but, I’m willing to take my chances in a court of law if my rights are sanctioned unfairly.

After a year-long experiment that saw its Facebook “social reading” app gain more than six million monthly users — and then lose more than half of those after the network changed the way those apps work — the Guardian has decided to take back control of its content.

A little over a year ago, a big topic of discussion in the newspaper business — apart from the ongoing cataclysmic decline in print advertising revenue, of course — was how to leverage Facebook as a platform for content, and specifically the rise of what were called “social reading” apps, which were like mini-newspapers housed within a Facebook page.

The Washington Post and The Guardian were among those who launched these applications, and for a time they drove a substantial amount of traffic, until Facebook changed the way they worked. Now the Guardian has said it is effectively shutting down its app and will be pushing readers from the social network to its website instead, so that it can retain more control over what happens to its content.

The Guardian‘s app now has a large banner ad that says “The Guardian app is changing” and links to a blog post on the newspaper’s website by product manager Anthony Sullivan. In that post, Sullivan notes that the paper launched the social-reading app in November of last year as an experiment in how to use social platforms like Facebook to increase the readership of the Guardian’s content and allow people to share it more easily. Those goals have been achieved, he said, with millions of people — more than six million a month, at the peak usage of the app — engaging with the paper’s stories, many of them outside the Guardian‘s typical demographic:

“The Facebook app has given us access to a hard to reach audience and has helped us learn much more about our new and existing readership which, as a digital first organisation, is crucial [but] we have decided to switch our focus to creating more social participation for our users on our own core properties…”

It seems clear that the Guardian has decided the benefits of controlling the way that readers come into contact with its content — and how they interact with it once they have done so — outweigh the benefits of the social reader app. In particular, the paper no longer has to worry about whether Facebook is going to hide more of its links from users because they are not “liking” or sharing them enough…

Facebook’s behavior continually reinforces the fact that it is in the driver’s seat when it comes to how the content is seen (or not seen), and under what conditions users can interact with it. The Guardian‘s latest move means that it can still get most of the positive impact from a relationship with Facebook — since it allows users to login to its site with their Facebook ID and can use that to customize content or make it easily shareable — without giving up as much control. Whether that makes the process more lucrative for the paper as well remains to be seen.

While I haven’t a detailed opinion or approach to the questions raised by Mathew Ingram – mostly because Facebook is only an incidental part of my online life. My personal blog offers little more than a link to my latest posts. Class Warfare Exists has utilized involvement with Facebook to grow rapidly into o significant point of expression for progressive politics in North America. Dvorak Uncensored hardly notices the existence of Facebook.

So, I offer the opinion of one of the better writers and analysts from GigaOm – mostly because it feels like respecting and supporting the Guardian is what he’s about. And after decades of involvement with that newspaper, I feel the same.