Daniel Keeton’s doggie brew business has been years in the making. But until last summer, his only customer was his dog, Lola Jane. After we profiled Dawg Grog Sunday night, success came to Keeton — literally overnight.

“I had absolutely no idea this was going to be as big as it is right now,” Keeton said Wednesday.

Keeton currently sells his product only at two Bend retailers, Visit Bend and Muddy Paws Bathhouse on Bend’s Westside. But now, orders are coming in from across the country.

His product also happens to be “green.” One of the main ingredients in Dawg Grog is a byproduct from the brewery Keeton works at.

“Towards the tail end of this process, we have leftover wort, and that used to go down the drain,” Lawrence said.

Keeton combines the brewery’s wort with water, vegetable broth and glucosamine to make his canine concoction…

Dawg Grog can be served alone as a treat or over dry dog food. One thing to point out: Keeton makes the brew on his own, it’s completely his own creation. Boneyard Brewery only provides the wort that goes into it.

For more information on Keeton’s Dawg Grog you can visit his website: http://www.dawggrog.com.

The TV station covering this tale must have nervous lawyers on retainer. They make certain a couple of times that we know the brew is non-alcoholic and NOT made by the Boneyard Brewery.

Manohar Lal Sharma – is this the most disreputable lawyer in India?

The lawyer representing three of the men charged with the gang rape and murder of a medical student aboard a moving bus in New Delhi has blamed the victims for the assault, saying he has never heard of a “respected lady” being raped in India.

Manohar Lal Sharma’s comments come as Indians have reacted with outrage to the opinions of politicians and a religious preacher who have accused westernized women of inviting sexual assaults. Sharma said the male companion of the murdered 23- year-old was “wholly responsible” for the incident as the unmarried couple should not have been on the streets at night.

“Until today I have not seen a single incident or example of rape with a respected lady,” Sharma said in an interview at a cafe outside the Supreme Court in India’s capital. “Even an underworld don would not like to touch a girl with respect.”

Sharma’s comments highlight frequently aired attitudes toward women in India. Activists say reporting of sex crimes and police investigations of rape are hindered by a tendency to blame the victim for not following the traditional, conservative social roles ascribed to women.

“This is the mentality which most Indian men are suffering from unfortunately,” said Ranjana Kumari, director for the New Delhi-based Centre for Social Research. “That is the mindset that has been perpetrating this crime because they justify it indirectly, you asked for it so it is your responsibility.”

A spiritual guru, Asharam, sparked an outcry earlier this week when he said the New Delhi victim was equally responsible and should have “chanted God’s name and fallen at the feet of the attackers” to stop the assault.

Mohan Bhagwat, the head of the pro-Hindu Rashtriya Swayamsevak Sangh that underpins the country’s main opposition political party, said rapes only occur in Indian cities, not in its villages, because women there adopt western lifestyles…

The defendants were brought into court today protected by more than 20 police for a brief hearing. Sharma said the court was adjourned after he had filed an application requesting the charge sheet be given to the men in Hindi rather than English…

The gang rape of the woman on Dec. 16 provoked a sustained and charged debate about the safety of women in the world’s biggest democracy. The brutality of the crime and allegations by the male friend of the victim that it took police 45 minutes to respond to calls outraged the nation.

Advocates for the worst of reactionary culture in India, gurus like Asharom, scumbag lawyers like Manohar Lal Sharma are engaged in a race to the very bottom of a backwards lifestyle. It is absurd to call India a democracy when the safety of women has no guarantee from the police or the state. Half the population has no rights.

The government says it is investigating ways and means of speeding justice for women. I’d be amazed if this pursuit has anymore effect than the annual pantomime investigations of corruption – which lead only to changing partners in the dance of deceit in Indian politics.

Volusia County sheriff’s deputies have located the third suspect in connection with an attempted homicide that happened Tuesday.

Hobart was wanted by authorities after they said she was involved in the beating and dragging of 54-year-old Robert Hall.

Investigators said Morris still lives with Hall and learned he had another woman over while she was away.

Morris, Anderson and Hall were all drinking together when the duo suddenly attacked the victim…

Deputies said Morris and Anderson beat up Hall, waved a gun around and used a stun gun on him. Then tied him up and dragged him from the back of a truck for about a half mile, according to authorities.

Hall told authorities that at one point Morris and Anderson stopped the truck and were overheard saying that they were going to drive and find a hole to bury him in.

Maybe you really are safer doing your drinking in some sleazy bar instead of at home with friends – and ex-wives.

Tammy Holmes, her grandchildren, a neighbor’s child, take refuge as a wildfire rages nearby

A building burns onshore near the jetty where the family sheltered

Tammy’s husband Tim took the photos with his iPhone -sending them to the children’s mother who hadn’t been able to get back to the family – he wanted to show her they were together and surviving OK.

Solid decision. The town – Dunalley, Tasmania – was destroyed in the fire. The important part as ever is that they all survived. 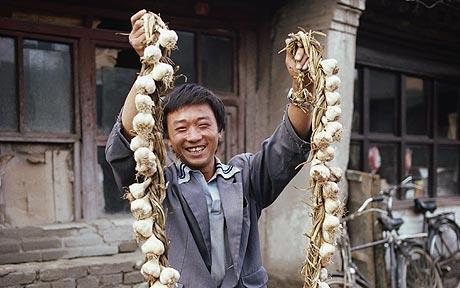 Norway can outsource their vampires to China, as well

Prosecutor Thomas Ahlstrand in Gothenburg said on Wednesday that the men had shipped the 1.2 tonnes of Chinese garlic to Norway by boat, where it entered the country duty-free as it was considered to be in transit.

They then drove it across the Swedish border, avoiding customs checks and Swedish import duties. Ahlstrand said the men had avoided $13.1 million in Swedish taxes through the scheme.

He said a lengthy police investigation had led to the identification of two British men allegedly behind the operation, which took place in 2009-2010.

I guess they won’t tell us who they are until they’re busted. At least this speaks well of progressive changes in Scandanavian cooking. 🙂