The tippe top is a round top that, when spun, tilts to one side and leaps up onto its stem. This is perplexing, as the toy appears to be gaining energy — its center of mass rises with the flip.

How is this possible? The geometrical center of the top is higher than its center of mass. As the toy begins to topple to one side, friction with the underlying surface produces a torque that kicks it up onto its stem. It does gain potential energy, but it loses kinetic energy — in fact, during the inversion it actually reverses its direction of rotation.

Entire treatises have been written on the underlying physics, and the toy has occupied at least two Nobel Prize winners — above, Wolfgang Pauli and Niels Bohr play with one at the inauguration of the Institute of Physics at Lund, Sweden, in July 1954.

Last week Eric Cantor, the House majority leader, gave what his office told us would be a major policy speech. And we should be grateful for the heads-up about the speech’s majorness. Otherwise, a read of the speech might have suggested that he was offering nothing more than a meager, warmed-over selection of stale ideas.

To be sure, Mr. Cantor tried to sound interested in serious policy discussion. But he didn’t succeed — and that was no accident. For these days his party dislikes the whole idea of applying critical thinking and evidence to policy questions. And no, that’s not a caricature: Last year the Texas G.O.P. explicitly condemned efforts to teach “critical thinking skills,” because, it said, such efforts “have the purpose of challenging the student’s fixed beliefs and undermining parental authority.”

And such is the influence of what we might call the ignorance caucus that even when giving a speech intended to demonstrate his openness to new ideas, Mr. Cantor felt obliged to give that caucus a shout-out, calling for a complete end to federal funding of social science research. Because it’s surely a waste of money seeking to understand the society we’re trying to change.

Want other examples of the ignorance caucus at work? Start with health care, an area in which Mr. Cantor tried not to sound anti-intellectual; he lavished praise on medical research just before attacking federal support for social science. How much money are we talking about? Well, the entire National Science Foundation budget for social and economic sciences amounts to a whopping 0.01 percent of the budget deficit…

The desire to perpetuate ignorance on matters medical is nothing compared with the desire to kill climate research, where Mr. Cantor’s colleagues — particularly, as it happens, in his home state of Virginia — have engaged in furious witch hunts against scientists who find evidence they don’t like…Republicans in the State Legislature have specifically prohibited the use of the words “sea-level rise…”

O.K., at this point the conventions of punditry call for saying something to demonstrate my evenhandedness, something along the lines of “Democrats do it too.” But while Democrats, being human, often read evidence selectively and choose to believe things that make them comfortable, there really isn’t anything equivalent to Republicans’ active hostility to collecting evidence in the first place.

The truth is that America’s partisan divide runs much deeper than even pessimists are usually willing to admit; the parties aren’t just divided on values and policy views, they’re divided over epistemology. One side believes, at least in principle, in letting its policy views be shaped by facts; the other believes in suppressing the facts if they contradict its fixed beliefs.

In her parting shot on leaving the State Department, Hillary Clinton said of her Republican critics, “They just will not live in an evidence-based world.” She was referring specifically to the Benghazi controversy, but her point applies much more generally. And for all the talk of reforming and reinventing the G.O.P., the ignorance caucus retains a firm grip on the party’s heart and mind.

Paul Krugman is too polite to use a word more commonly found on the Web – “ignoranus”. It more thoroughly describes Republican philosophy and practice. Ignorance pursued as an end unto itself – which only provides satisfaction to dimwits whose mental processes are confined to the southern end of the alimentary canal.

Israeli police detained 10 women at one of Judaism’s most sacred sites on Monday for wearing prayer shawls, which Orthodox tradition sees as solely for men, a spokesman said.

The incident at the Western Wall in Jerusalem’s Old City highlighted the divisions between the more liberal streams of Judaism and politically powerful Orthodox groups that traditionally limit the role of women in prayer.

Also a graphic illustration of Israel’s fealty to theocracy.

The Western Wall is administered under strict Orthodox ritual law, which bars women from wearing prayer shawls or publicly reading from the holy scriptures.

Among those held was Susan Silverman, a reform rabbi who is a sister of U.S. comedian Sarah Silverman. Two other American citizens and Israeli members of “Women of the Wall”, a group that campaigns for gender equality in religious practice, were also detained.

The group routinely convenes for monthly prayer sessions at the Western Wall, revered by Jews as a perimeter wall of the Biblical Temple in Jerusalem. Some of its members have been detained by police in the past for wearing prayer shawls at the site and released without charge.

Micky Rosenfeld, a spokesman for national police, said the women had acted “against regulations set by the High Court”, citing a decision of a decade ago upholding Orthodox rules at the site to avoid friction between worshippers.

‘Nuff said. Avoiding friction by placing the most backwards sects in the nation in charge of law and order is all that can be expected from a court constituted to rubber stamp reactionary politics. 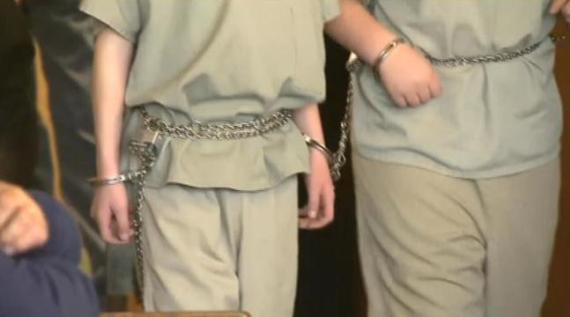 Two fifth-grade boys were held on $100,000 bond each after being charged with conspiracy to commit murder at their school in Washington state, officials said.

The boys, ages 10 and 11, were expected to be formally charged in juvenile court with conspiracy to commit first-degree murder, possession of a firearm and witness tampering for allegedly bringing a stolen gun and a knife to school and threatening to kill a number of classmates…

The boys at Fort Colville Elementary School were taken into custody Thursday after a search revealed one boy had a knife and a handgun in his backpack.

“These young men conspired to kill,” Rasmussen said. “It was interrupted by the bravery of a fourth grader who saw something and said something … and interrupted a murder.”

“We’ve been told that the boys had a plan to kill an ex-girlfriend … and harm other students,” Cashion said. “There was no list, but names were given to the police.”

Neither can I. I was always advanced in reading and comprehension skills as a child. In fifth grade I was aware of murder and conspiracy to commit murder.

But, only if you were the Count of Monte Cristo.

What kind of culture teaches a child the best way to solve questions of love and sex – is with a gun?