Back in late 2009 Boston Dynamics revealed it was working on a humanoid robot that would test protective clothing for the military. Having already amazed the world three years earlier with the lifelike balancing capabilities of its quadruped BigDog, this would be the company’s first bipedal robot. It was an ambitious project, but it appears the work has paid off. The robot’s eerily realistic body movements are made all the more convincing now that its mechanical nature is hidden by a chemical protection suit.

In order to test the durability of hazmat suits, the robot would have to perform rigorous tests like running, jumping, crouching, and crawling. When the project was first announced it was almost too ambitious to be believed, but the company has been making steady progress over the years. In 2011 it published a video of an incomplete PETMAN (Protection Ensemble Test Mannequin) performing realistic motions that seem to leapfrog high tech robots developed over the course of decades in Japan.

Although tethered by a power cable, PETMAN’s balance is more dynamic and natural than other bipeds, and it outdoes other humanoid robots with its skin. The robot not only has sensors embedded in its skin that will detect leaks in the suit, but it also artificially perspires in order to maintain a micro-climate inside the clothing. The idea is to precisely replicate the real conditions inside a suit that might affect its eventual wearer.

Boston Dynamics says that PETMAN has been delivered to a testing facility where it is undergoing validation experiments. Soon the robot will be installed inside of an exposure chamber where it will be tested against the likes of sarin and mustard gas.

A useful DARPA-esque project. And BD is to be congratulated on the quality and detail of their work. 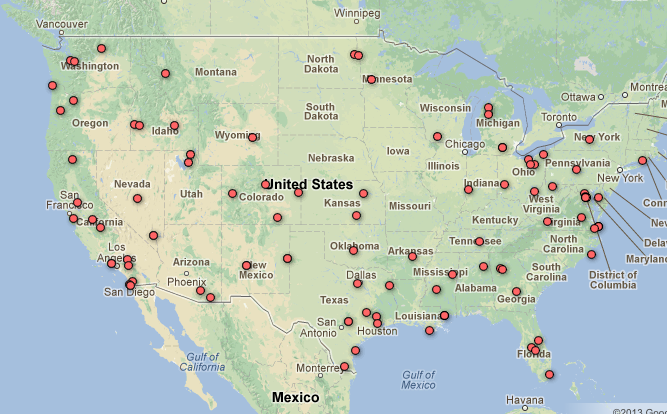 The Federal Aviation Administration has finally released a new drone authorization list. This list, released in response to EFF’s Freedom of Information Act lawsuit, includes law enforcement agencies and universities across the country, and—for the first time—an Indian tribal agency. In all, the list includes more than 20 new entities over the FAA’s original list, bringing to 81 the total number of public entities that have applied for FAA drone authorizations through October 2012…

The list comes amid extensive controversy over a newly-released memo documenting the CIA’s policy on the targeted killing of American citizens and on the heels of news that Charlottesville, Virginia has just become one of the first cities in the country to ban drones. This new list should contribute to the debate over whether using domestic drones for surveillance is consistent with the Constitution and with American values.

As we’ve written in the past, drone use in the United States implicates serious privacy and civil liberties concerns. Although drones can be used for neutral, or even for positive purposes, drones are also capable of highly advanced and, in some cases, almost constant surveillance, and they can amass large amounts of data. Even the smallest drones can carry a host of surveillance equipment, from video cameras and thermal imaging to GPS tracking and cellphone eavesdropping tools. They can also be equipped with advanced forms of radar detection, license plate cameras, and facial recognition. And, as recent reporting from PBS and Slate shows, surveillance tools, like the military’s development of gigapixel technology capable of “tracking people and vehicles across an entire city,” are improving rapidly.

Aside from the tinfoil-hat crowd, I have to roll back to my opinion about any kind of technology. What counts is the use – not the technology itself.

Of course, there are exceptions, legitimate or not so much. I don’t think high school students should spend time constructing nuclear weapons. I don’t think my fellow hunters need assault rifles.

Radioactive water may have leaked into the ground from a storage tank at Japan’s crippled Fukushima Daiichi nuclear power plant in the latest of a series of troubles at the facility.

The fresh leak on Sunday comes a day after Tokyo Electric Power Co. said up to 120 tonnes of contaminated water may have escaped from another of the seven underground reservoir tanks at the tsunami-damaged plant.

TEPCO said radioactivity was detected in water outside a tank in the latest leak but that the contaminated water was unlikely to flow into the sea.

The tanks store water used to cool down the reactors after radioactive caesium is removed but other radioactive substances remain.

The series of leakages came after one of the systems keeping spent atomic fuel cool at the plant temporarily failed on Friday, the second outage in a matter of weeks, underlining the precarious fix at the plant.

Nuclear fuel, even after use, has to be kept cool to prevent it from overheating and beginning a self-sustaining atomic reaction that could lead to meltdown.

The plant was hit by the giant tsunami of March 2011 as reactors went into meltdown and spewed radiation over a wide area, forcing tens of thousands of people from their homes and polluting farmland.

We’re back to getting daily lies from the PR department at Tokyo Electric. I can’t think of a good reason why we should believe anything this crowd says. They lied by the book, by the day, by the week – all through the disaster following the tsunami.

Most outrageous fish tales begin with an arching arm gesture and “a fish this big” — but this one starts with “fish that traveled this far.”

Just over two years after the Japan earthquake and tsunami, researchers made a startling discovery in a 20-foot-long Japanese fishing vessel that washed ashore last month near Long Beach, Washington: five tropical fish, alive and well.

They are called striped beakfish, and they are native to warmer waters near Japan, China and the Korean Peninsula.

The five stowaways, roughly the size of your palm, lived in a cozy spot at the back of the boat.

A 20- to 30-gallon containment hold in the boat’s stern lost its cover, and that part of the boat was submerged as the vessel drifted in the ocean, said Allen Pleus, a scientist with the Washington Department of Fish and Wildlife. That “created like a cave they could go in and out of,” Pleus said…

When researchers first explored the boat, they saw just one of the fish in the holding tank. They collected it in a bucket and took it to Long Beach City Hall.

Someone at City Hall called the Seaside Aquarium in Seaside, Oregon, to come and get it. Fish and Wildlife personnel found three more in the tank’s murky water. Finally the boat was towed to a state yard, where the fifth fish came swimming up to Pleus.

The one that went to the aquarium will live out its life there.

The other fishies along with anemones, scallops, crabs that also survived the journey will be dissected and examined in detail at Oregon States University.