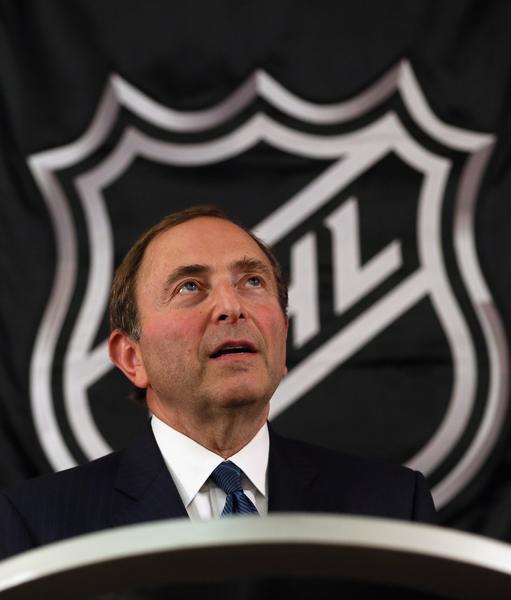 With growing expectations in recent weeks that a gay male athlete in one of the four major professional sports leagues in the United States will soon come out publicly for the first time, the leagues have begun exploring ways to accommodate and respond to such a landmark announcement.

The National Hockey League and its players announced Thursday what appeared to be the most comprehensive measure by a major men’s league in support of gay athletes. The National Football League is working with gay advocacy groups to smooth the way for acceptance and to discuss how to prepare for the moment when one of its players publicly discusses his homosexuality…

The N.H.L. said it had formed a partnership with the You Can Play Project — an advocacy group pledged to fighting homophobia in sports — to plan training and counseling on gay issues for its teams and players.

Other leagues — the N.F.L., Major League Soccer, the National Basketball Association and Major League Baseball — have policies that prohibit discrimination based on sexual orientation, and various officials have spoken in support of gay athletes. The N.B.A. recently sent a memo to teams reminding them that interviews with players entering the N.B.A. draft should not include questions about religion, race and sexual orientation…

Patrick Burke, a scout for the Philadelphia Flyers and a founder of You Can Play, which was formed in March 2012, said the demographics of the N.H.L., with so many players from Canada and Northern Europe, were part of the reason the league had taken such a step.

“We have players from around the world, and a lot of those players are from countries that are seen as more progressive on L.G.B.T. issues,” Mr. Burke said, using the abbreviation for lesbian, gay, bisexual and transgender. “So I don’t think it’s unreasonable or strange to think that the N.H.L. and the N.H.L.P.A. are driving this, in part because our players tend to be more comfortable with this issue…”

N.F.L. player Brendon Ayanbadejo said that a loose consortium of supporters — including former athletes in several sports who came out after their careers were over, psychologists and friends — were trying to help put those players in touch with one another. What happens after that, he said, is up to them.

“As far as what happens, none of that is coordinated,” he said. “It’s going to be on their times, their terms. The only thing coordinated is support, them being able to talk to other athletes who have been in their shoes. We want to put them together, and we can be there to support them in whatever they want to do.”

One of the saddest aspects of topics like this is that even conservatives who whine about individuals and organizations taking progressive attitudes on questions like this – still bullshit themselves into believing they live in the most advanced country in the world.

We lost that title decades ago.

Advancements happening within the borders of the US of A are owed to the young at heart who are willing to fight against reaction, ignorance. That leadership banner can unfurl over the whole nation when all of the battles against True Believers are won. Sports figures being able to speak openly about their sexuality without fear of sanction is part of that, one more step.

Om Malik has become a terrific iPhone photographer. He posts many of his shots at his personal website – and modestly says he’s not advanced. He’s incorrect. Something I rarely say about one of the brightest and most successful geeks I know.

Here are samples of his photos of San Francisco – and Munich.

This photo of him taking a picture of San Francisco was taken by Benjamin Heath. The link behind the photo takes you to his Instagram page.

Some 50,000 tonnes of meat supplied by two Dutch trading companies and sold as beef across Europe since January 2011 may have contained horsemeat.

The meat is being recalled where possible, the Dutch authorities say.

There was no evidence that the meat was a threat to human health, the Netherlands Food and Consumer Product Safety Authority said.

In total, 132 companies in the Netherlands and some 370 more around Europe are affected by the discovery.

The two companies are owned by one man who has already previously been investigated by food safety officials, the BBC’s Matthew Price reports.

The recall covers meat dating back to 1 January 2011 up until 15 February this year, the Dutch food authority said…Due to the lapse of time, a lot of the meat “may already have been consumed”, it added…

“Given the size of the fraud, the Dutch decided to go public with their discovery…”

A new study using the patterns of Google search queries suggests that mental illnesses flourish in winter and decline in summer.

In both the United States and Australia, researchers found distinct seasonal patterns, high in winter and low in summer, in searches pertaining to anxiety, obsessive compulsive disorder, bipolar disorder, eating disorders, depression, suicide, attention deficit hyperactivity disorder and schizophrenia. The study appears in the May issue of The American Journal of Preventive Medicine.

Why this happens, and whether it is connected to increased incidence, is unclear, but it is known that varying hours of daylight, variations in physical activity and seasonal changes in blood levels of vitamin D and omega-3 fatty acids can affect mood.

“We have new kinds of data with which we can start to think about seasonality,” said the lead author, John W. Ayers, a research professor at San Diego State University. “This is just the beginning of a new research agenda.”

Another one of those times when I wish I was 30 years younger. I’d love to start off into medical computational analysis in a field like this. Has to be satisfying regardless of the direction of results.