With the cost of some lifesaving cancer drugs exceeding $100,000 a year, more than 100 influential cancer specialists from around the world have taken the unusual step of banding together in hopes of persuading some leading pharmaceutical companies to bring prices down.

Prices for cancer drugs have been part of the debate over health care costs for several years — and recently led to a public protest from doctors at a major cancer center in New York. But the decision by so many specialists, from more than 15 countries on five continents, to join the effort is a sign that doctors, who are on the front lines of caring for patients, are now taking a more active role in resisting high prices. In this case, some of the specialists even include researchers with close ties to the pharmaceutical industry.

The doctors and researchers, who specialize in the potentially deadly blood cancer known as chronic myeloid leukemia, contend in a commentary published online by a medical journal Thursday that the prices of drugs used to treat that disease are astronomical, unsustainable and perhaps even immoral.

They suggested that charging high prices for a medicine needed to keep someone alive is profiteering, akin to jacking up the prices of essential goods after a natural disaster.

“Advocating for lower drug prices is a necessity to save the lives of patients” who cannot afford the medicines, they wrote in Blood, the journal of the American Society of Hematology…

Some of the doctors who signed on to the commentary said they were inspired by physicians at the Memorial Sloan-Kettering Cancer Center in New York, who last fall refused to use a new colon cancer drug, Zaltrap, because it was twice as expensive as another drug without being better.

After those doctors publicized their objections in an Op-Ed articlein The New York Times, Sanofi, which markets Zaltrap, effectively cut the price in half…

Many of the roughly 120 doctors who were co-authors of the commentary — about 30 of whom are from the United States — work closely with pharmaceutical companies on research and clinical trials. They say they favor a healthy pharmaceutical industry, but think prices are much higher than they need to be to ensure that.

“If you are making $3 billion a year on Gleevec, could you get by with $2 billion?” Dr. Brian Druker, who is now director of the Knight Cancer Institute at Oregon Health and Science University, said in an interview. “When do you cross the line from essential profits to profiteering?”

Living here in the belly of the beast gives us no economic advantage. In truth, with a tame Congress, compliant political flunkies throughout the political infrastructure of the United States, it is Americans who are screwed to the wall with higher prices for necessary medication than in any other nation.

The American Institute of Architects announced its top ten green buildings in the US for 2013 on Monday (Earth Day, uncoincidentally). It’s a diverse list, containing a cheese factory, senior citizens’ apartments, school buildings, and a smattering of LEED certificates. There’s only one net zero building on the list, though it’s worth remembering that it’s much easier to build a net zero home than it is a net zero office or factory.

Step inside for a short profile of each of the buildings, or head straight to the gallery for the architectural eye candy.

I love this stuff. In most cases there is little premium added to the cost of construction – and sensible design can more than compensate.

The two of us live in 1200 sq.ft. designed and built on a tiny budget – and don’t use all the space we have.

Drinking a can of cola a day increases the risk of developing diabetes by a fifth, according to research.

The largest study of the link between soft-drink consumption and Type 2 diabetes in Europe has found that the sweetened beverages not only cause weight gain, which is associated with a higher rate of diabetes, but also increase the risk of the condition independently…

Researchers from Imperial College, London, led the study of more than 12,000 people with Type 2 diabetes whose diets were compared with 16,000 controls in nine European countries, including the UK.

Sweetened soft drinks contain a lot of calories which contribute to overweight and obesity, which in turn is a cause of diabetes. But the drinks appeared to increase the risk separately from this effect, possibly by triggering insulin resistance, reducing the body’s ability to use glucose…

Dr Romaguera said: “The hypothesis for fruit juice is different. We know they naturally contain sugar but fruits are not associated with an increase in diabetes, rather they are protective. It may be the anti-oxidants they contain that counter the effect of the sugar.”

Sugar has to be the most widely consumed poison in our culture – and corporate profiteers love it. If they could figure out some easy way to combine sugar with driving overpowered automobiles or getting a new credit card I think they’d be in hog heaven. 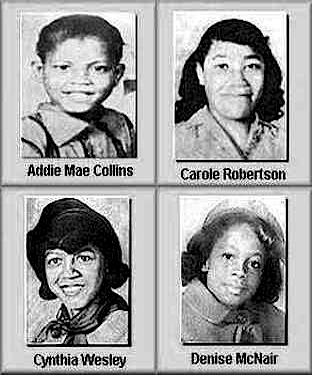 Almost 50 years after their deaths, the House voted Wednesday to award the Congressional Gold Medal to four young girls killed in the 1963 bombing of the 16th Street Baptist Church in Birmingham, Ala., a seminal moment in the civil rights movement.

Addie Mae Collins, 14, Denise McNair, 11, Carole Robertson, 14, and Cynthia Wesley, 14, were killed on the morning of Sunday, Sept. 15, 1963, in a bombing that also injured 22 other churchgoers. The attack caused international outrage and drew the attention of civil rights leaders, who came to Birmingham to expose the city’s discriminatory practices and compel Congress to pass civil rights legislation…

Over the years, the “four little girls,” as they’re known by some, have received few honors — there’s a Chicago scholarship program named for them and a memorial at Birmingham City Hall.

That changed Wednesday, when the House approved a bill honoring the four girls with the medal. The measure is cosponsored by Reps. Terri Sewell (D-Ala.) and Spencer Bachus (R-Ala.), who began pushing for the honor earlier this year with other members of the Alabama congressional delegation.

During a congressional trip in late February to visit key landmarks in the civil rights movement, aides said Sewell and her colleagues personally lobbied House Majority Leader Eric Cantor (R-Va.), who spoke in support of the bill on the House floor Wednesday.

The honor “is a strong reminder of how many people fought and died in the Civil Rights Movement so that this country could live up to its founding ideals of equality and opportunity,” Cantor said.

“I think after 50 years it is well due,” said Dianne Braddock, the older sister of Carole Robertson. Once the bill is approved by the House and Senate and signed by President Obama, “the whole nation will of course see this as a big honor,” she said. “It’s a big meaningful recognition. It’ll show that they didn’t die in vain. A lot of civil rights efforts were pushed forward based on that horrible tragedy that occurred. So they had some part to play in the progress that America made in regards to racial equality.”

I certainly remember the day. One more shame added to our nation’s record of reluctance to move forward on civil rights.

The local civil rights organization I belonged to held a vigil and student organizations from local colleges joined us.

A lot of attention moved to Birmingham, Alabama – and one of the most racist police departments in the entire nation and their KKK buddies.

Yes, I’d say recognition for those little girls is overdue.