FBI officials said Monday they foiled a terrorist attack being planned in a small western Minnesota town, but they offered no details about the exact targets of the attack – or the motive of the man accused of having a cache of explosives and weapons in a mobile home.

The FBI said “the lives of several local residents were potentially saved” with the arrest of Buford Rogers, 24, who made his first appearance Monday in U.S. District Court in St. Paul on one count of being a felon in possession of a firearm…

“The FBI believed there was a terror attack in its planning stages, and we believe there would have been a localized terror attack, and that’s why law enforcement moved quickly to execute the search warrant on Friday to arrest Mr. Rogers,” said FBI spokesman Kyle Loven.

He said the investigation is ongoing, and agents are looking at the case as one of domestic terrorism…

“That is not a large scale, nationwide group, as far as I know,” Christopher said. “I think it’s kind of them, and their family, and a few of their friends…”

According to a federal affidavit, FBI agents from the domestic terrorism squad searched the mobile home in Montevideo and discovered Molotov cocktails, suspected pipe bombs and firearms. The affidavit said Buford was there at the time, and one firearm recovered from the residence was a Romanian AKM assault rifle.

In an interview with authorities, Rogers admitted firing the weapon on two separate occasions at a gun range in Granite Falls, the affidavit said. Rogers has a 2011 conviction for felony burglary and is not allowed to have a firearm.

Of the several flavors of outright crazy right-wingers clustered around profit centers ranging from the NRA to Fox Noise the militia-types are the most dangerous. Unlike true lone wolf terrorists, they feed each other’s paranoia constantly.

Just makes them all the more likely to start killing whoever they fear the most – this week.

Adam Kokesh, 31, is planning a July 4 rally of pro-gun activists openly carrying rifles from Virginia to Washington as an act of “civil disobedience.” The plan, according to his Facebook event page, is to march across Memorial Bridge with rifles loaded and slung across the back “to put the government on notice that we will not be intimidated [and] cower in submission to tyranny.”

Kokesh writes that if 10,000 attendees RSVP by June 1st, “we have the critical mass necessary to pull this off.” He said he wants to have at least 1,000 actually marching in the event, and as of this writing, more than 1,400 have said they were going…

If the event goes forward, it will most likely end in arrests. The state of Virginia allows open carrying of firearms, but while Washington, D.C. allows registration of firearms, the city does not issue permits to carry them…

“Should we meet physical resistance, we will peacefully turn back, having shown that free people are not welcome in Washington, & returning with the resolve that the politicians, bureaucrats, & enforcers of the federal government will not be welcome in the land of the free…”

His latest march comes on the heels of increasingly anti-government rhetoric, with Kokesh tweeting on May 2, “It’s time to abolish the US federal government.”

Nutball. And a failure in his attempt to get to Congress via the Republican Party.

In 2010, he ran as the Libertarian alternative in the Republican primary where I live in the 3rd Congressional District of New Mexico – ending up with 29% of the vote. The “winner” of that primary got 43% of the vote in the general election for Congress btw – running against a member of the Congressional Progressive Caucus.

President Obama has once again pledged to close the Guantánamo Bay prison. But can he back up his brave words with decisive action?

The answer is yes, if he chooses to.

At present, legislation bars him from sending the Guantánamo detainees to the mainland United States to receive justice from the federal courts, leaving them to be tried by slow-moving military commissions that deny them many of the guarantees of civilian legal procedure. Nevertheless, the president has a way forward. He can, on his own authority, send federal judges to Guantánamo, where they could resolve the remaining cases in trials everyone can respect.

Previous presidents have established federal civilian courts on territory under American military control without going through Congress. The clearest precedent was set in postwar Germany…

Nothing prevents President Obama from establishing a similar court at Guantánamo, where 166 prisoners remain under indefinite detention and about 100 have gone on a hunger strike. Acting under his authority as commander in chief, the president should quickly direct a team of district judges to try the detainee cases in Guantánamo under civilian criminal procedures. Such an order should also create a panel of federal judges to hear appeals…

We have reached the point of no return. Since President George W. Bush revived military commissions in 2001, half a dozen prosecutors have resigned in protest and Congress has twice passed legislation in efforts to create a system that might win public confidence.

Now the escalating hunger strike has led to forced feedings and physical confrontations in which guards have used nonlethal bullets to quell unrest. It is only a matter of time before suicide attempts further intensify the cycle of resistance and repression…

Constitutional lawyers always prate about ordinary citizens failing to comprehend the value of Human Rights is that the most important time to defend those rights – is when you really hate to do so.

The point, of course, is that Congress and Presidents are equal cowards when they have to face the same question. 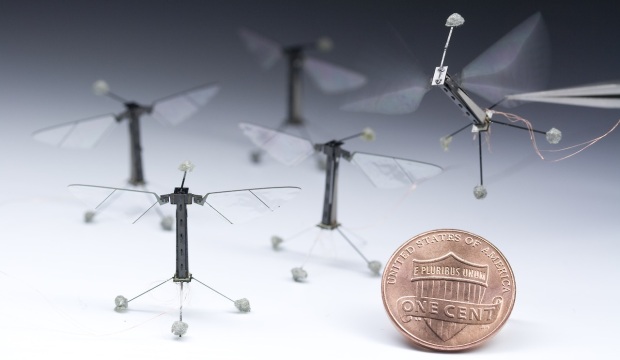 In the very early hours of the morning, in a Harvard robotics laboratory last summer, an insect took flight. Half the size of a paperclip, weighing less than a tenth of a gram, it leapt a few inches, hovered for a moment on fragile, flapping wings, and then sped along a preset route through the air.

Like a proud parent watching a child take its first steps, graduate student Pakpong Chirarattananon immediately captured a video of the fledgling and emailed it to his adviser and colleagues at 3 a.m.—subject line, “Flight of the RoboBee…”

The demonstration of the first controlled flight of an insect-sized robot is the culmination of more than a decade’s work, led by researchers at the Harvard School of Engineering and Applied Sciences (SEAS) and the Wyss Institute for Biologically Inspired Engineering at Harvard.

“This is what I have been trying to do for literally the last 12 years,” says Robert J. Wood…principal investigator of the…RoboBee project. “It’s really only because of this lab’s recent breakthroughs in manufacturing, materials, and design that we have even been able to try this. And it just worked, spectacularly well…”

“We had to develop solutions from scratch, for everything,” explains Wood. “We would get one component working, but when we moved onto the next, five new problems would arise. It was a moving target.”

Flight muscles, for instance, don’t come prepackaged for robots the size of a fingertip…

The robotic insects also take advantage of an ingenious pop-up manufacturing technique that was developed by Wood’s team in 2011. Sheets of various laser-cut materials are layered and sandwiched together into a thin, flat plate that folds up like a child’s pop-up book into the complete electromechanical structure.

The quick, step-by-step process replaces what used to be a painstaking manual art and allows Wood’s team to use more robust materials in new combinations, while improving the overall precision of each device.

“We can now very rapidly build reliable prototypes, which allows us to be more aggressive in how we test them,” says Ma, adding that the team has gone through 20 prototypes in just the past six months.

RTFA for dynamic discussion on power, control, future processes and uses to be tested. Immersed in the world of science and technology, the developers of this technology aim their efforts at benefitting humankind.

Which leaves two additional directions of development, whimsical and military. I’ll volunteer a suggestion for microtronic controls adapted for fly-fishing. No doubt the death and destruction crowd are already coming up with their own ideas.