The Heritage Foundation made something of a splash with its study suggesting that immigration reform will cost the public trillions. Past work by one of its co-authors helps put that piece in context.

Jason Richwine is relatively new to the think tank world. He received his PhD in public policy from Harvard in 2009, and joined Heritage after a brief stay at the American Enterprise Institute. Richwine’s doctoral dissertation is titled “IQ and Immigration Policy”; the contents are well summarized in the dissertation abstract:

The statistical construct known as IQ can reliably estimate general mental ability, or intelligence. The average IQ of immigrants in the United States is substantially lower than that of the white native population, and the difference is likely to persist over several generations. The consequences are a lack of socioeconomic assimilation among low-IQ immigrant groups, more underclass behavior, less social trust, and an increase in the proportion of unskilled workers in the American labor market. Selecting high-IQ immigrants would ameliorate these problems in the U.S., while at the same time benefiting smart potential immigrants who lack educational access in their home countries.

Richwine’s dissertation asserts that there are deep-set differentials in intelligence between races. While it’s clear he thinks it is partly due to genetics — “the totality of the evidence suggests a genetic component to group differences in IQ” — he argues the most important thing is that the differences in group IQs are persistent, for whatever reason. He writes, “No one knows whether Hispanics will ever reach IQ parity with whites, but the prediction that new Hispanic immigrants will have low-IQ children and grandchildren is difficult to argue against…”

He adds more blah, blah, blah about the skills required of high-tech industry and why this is more important than the low-tech skills agribusiness already is in the habit of hiring – but, that’s OK – it fits the ideology of the Heritage Foundation. Of course.

This junk science rationale for racism has infected rightwing ideology from 1920’s Germany right on through America Firsters to today’s birthers and Confederacy revivalists. Apologists at the Heritage Foundation say that Richwine’s bigotry had no effect on the tract they just produced to muster opposition to immigration reform. I guess it’s just the incidental racism that’s part of all Republican politics, nowadays.

When it comes to deciding which light bulb to buy, a label touting the product’s environmental benefit may actually discourage politically conservative shoppers.

The operand being “in the United States” – where reactionary ideology trumps sense.

In the first study…the more conservative the participant, the less likely that person was to support investing in energy-efficient technology. The study found that this divide was primarily driven by the lower value that conservatives placed on reducing carbon emissions. The values of energy independence and reducing energy costs had more universal appeal…

In the second study…a CFL bulb was priced at $1.50, while the incandescent bulb was 50 cents. When the more expensive CFL came with no environmental label, liberals and conservatives selected it at roughly the same high frequency. However, when the more expensive CFL bulb also was accompanied by a “protect the environment” sticker, participants who identified as more politically moderate or conservative were less likely to buy it…

“The environmental aspect of energy efficiency has an ideologically polarizing impact that can undermine demand for energy-efficient technology, specifically among more politically conservative individuals,” Kunreuther said…

“These findings demonstrate that a one-size-fits-all approach is unlikely to be successful for making energy-efficient products appealing to consumers,” Larrick said.

Simply relying on educated self-interest is a mistake when trying to market products concerned with energy and environment. For many conservatives – many American conservatives that is – stupidity turns a simple economic choice into a conflict with quasi-religious dogma.

“I don’t care if Bush said he’d let you plant this to poppies…Michelle won’t allow it.”

The C.I.A.’s station chief here met with President Hamid Karzai on Saturday, and the Afghan leader said he had been assured that the agency would continue dropping off stacks of cash at his office despite a storm of criticism that has erupted since the payments were disclosed.

The C.I.A. money, Mr. Karzai told reporters, was “an easy source of petty cash,” and some of it was used to pay off members of the political elite, a group dominated by warlords.

The use of the C.I.A. cash for payoffs has prompted criticism from many Afghans and some American and European officials, who complain that the agency, in its quest to maintain access and influence at the presidential palace, financed what is essentially a presidential slush fund. The practice, the officials say, effectively undercut a pillar of the American war strategy: the building of a clean and credible Afghan government to wean popular support from the Taliban.

Instead, corruption at the highest levels seems to have only worsened. The International Monetary Fund recently warned diplomats in Kabul that the Afghan government faced a potentially severe budget shortfall partly because of the increasing theft of customs duties and officially abetted tax evasion…

…Mr. Karzai, in offering his most detailed accounting to date of how the money had been used, probably raised as many questions as he answered…Formal aid, for instance, is publicly accounted for and audited. The C.I.A.’s cash is not, though Mr. Karzai did say the Americans were given receipts for the money they dropped off at the presidential palace.

Asked why money that was used for what would appear to be justifiable governing and charitable expenses was handed over secretly by the C.I.A. and not routed publicly through the State Department, Mr. Karzai replied: “This is cash. It is the choice of the U.S. government.”

He added, “If tomorrow the State Department decides to give us such cash, I’d welcome that, too.”

Mr. Karzai declined to specify how much cash his office received each month, or how much it had been given by the C.I.A. so far. At his meeting with the station chief, it was made clear to him that “we are not allowed to disclose” the amount, he said…

The American Embassy in Kabul, which handles queries for the C.I.A., declined to comment.

Heartwarming to note that American foreign policy hasn’t especially changed since the days of John Foster Dulles and Dean Rusk. Corruption is closer akin to the White House and Congress than anything offered by sovereign democracy.

“This could make power generation from natural gas both cleaner and more efficient,” says Fanxing Li, co-author of a paper on the research and an assistant professor of chemical and biomolecular engineering at North Carolina State University.

At issue is a process called chemical looping, in which a solid, oxygen-laden material — called an “oxygen carrier” — is put in contact with natural gas. The oxygen atoms in the oxygen carrier interact with the natural gas, causing combustion that produces energy.

…Li’s team has developed a new type of oxygen carrier that include a “mixed ionic-electronic conductor,” which effectively shuttles oxygen atoms into the natural gas very efficiently — making the chemical looping combustion process as much as 70 times faster. This mixed conductor material is held in a nanoscale matrix with an iron oxide — otherwise known as rust. The rust serves as a source of oxygen for the mixed conductor to shuttle out into the natural gas.

In addition to energy, the combustion process produces water vapor and CO2. By condensing out the water vapor, researchers are able to create a stream of concentrated CO2 to be captured for sequestration.

Because the new oxygen carrier combusts natural gas so much more quickly than previous chemical looping technologies, it makes smaller chemical looping reactors more economically feasible — since they would allow users to create the same amount of energy with a smaller system.

“Improving this process hopefully moves us closer to commercial applications that use chemical looping, which would help us limit greenhouse gas emissions,” Li says.

Bravo! Regardless of which means and methods are dear to your heart in the process of combating climate change, reducing man-made pollutants – please, keep your mind open to every step in any direction which reduces the problems and offers a cleaner, healthier life for us all. 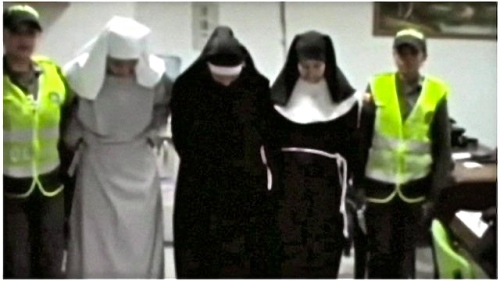 Three women dressed like nuns have been arrested at a Colombian airport allegedly smuggling drugs…Police said the women, aged 20, 32 and 37 had two kilos of cocaine each strapped to their bodies.

Officers said they became suspicious because the women “didn’t look like nuns” and their habits “didn’t look right”.

They were travelling from the capital Bogota to the island of San Andres, popular with holidaymakers…

The three, who according to police broke into tears when the cocaine was discovered strapped to their legs, will be charged with drug smuggling.

They reportedly said they had been forced into drug trafficking because of “financial hardship”.

The Colombian island of San Andres, just off the coast of Nicaragua, is a popular destination for foreign and Colombian tourists alike.

The island is also along a busy drug-smuggling route, especially popular with speedboats and submarines laden with cocaine, stopping off on their way from Colombia to Central America.