As the nation’s leading Roman Catholic bishop, Cardinal Timothy M. Dolan of New York has been spearheading the fight against a provision of the new health care law that requires employers, including some that are religiously affiliated, to cover birth control in employee health plans.

But even as Cardinal Dolan insists that requiring some religiously affiliated employers to pay for contraception services would be an unprecedented, and intolerable, government intrusion on religious liberty, the archdiocese he heads has quietly been paying for such coverage, albeit reluctantly and indirectly, for thousands of its unionized employees for over a decade.

The Archdiocese of New York has previously acknowledged that some local Catholic institutions offer health insurance plans that include contraceptive drugs to comply with state law; now, it is also acknowledging that the archdiocese’s own money is used to pay for a union health plan that covers contraception and even abortion for workers at its affiliated nursing homes and clinics…

The archdiocese agreed to cover its own health workers long before Cardinal Dolan became archbishop of New York, and even today insists that it has no choice. As a result, about 3,000 full-time workers at ArchCare, also known as the Catholic Health Care System, receive coverage for contraception and voluntary pregnancy termination through their membership in 1199 SEIU United Healthcare Workers East, a powerful health care workers union, according to Dave Bates, a spokesman for the union.

ArchCare, which operates seven nursing homes and a variety of other health facilities, gives its 1199 union employees the same coverage they would get at over 100 other nonprofit hospitals or nursing homes in the New York area, because ArchCare voluntarily belongs to the League of Voluntary Hospitals and Homes, a multi-employer organization that negotiates with the union every few years for a joint labor contract.

Bruce McIver, the president of the league since 1991, said…“Eventually, the Catholics just said, you know, we are going to ignore the issue and pay into the fund and people are going to make their own choices about contraception and so forth,” Mr. McIver said.

During union negotiations, “I don’t remember it coming up in the last dozen years or so, ever,” he said. “In a place like New York, their employees, not all of whom are Catholic, would react pretty badly…”

The root of all modern hypocrisy owes so much to the history of the Holy Roman Catholic Church.

My kind of hero

Despite a life of adversity, poverty, and even homelessness, 18-year-old Chelesa Fearce is blazing a trail of academic success. Growing up in Clayton County, Georgia, Chelesa, along with her mother and three siblings, frequently moved from shelter to shelter, even living in her family’s car in times of need.

Regardless of the obstacles in the way, Chelesa stayed focused on her goals: scoring high marks in high school and attending a good college.

Thursday Chelesa graduated with a 4.529 GPA from Charles Drew High School in Clayton County, making her class valedictorian. Thanks to taking college courses for the past two years, Chelesa will enter Spelman College in Atlanta, Georgia later this year as a junior.

During Chelesa’s high school years, her mother, Reenita Shepard, was laid off from her job more than once, resulting in the family losing their home. But Chelesa stayed focused on her studies even when bouncing from shelter to shelter, or on those most difficult nights spent in the car.

“At night I just had to open my book in the dark and use my cellphone light, just do what I had to do,” she said…

Chelesa admitted that she faced many struggles and at times found it difficult to maintain a positive spirit. “It was hard sometimes. I kept my situation a secret because I didn’t want anyone to know my business; I just went to school and did what I had to do.” Still, there were times it could all be overwhelming. “Senior year was a lot, you know with applying for schools, scholarships and standardized tests and I’d want to sit back and just kick it and relax but I knew I had things to accomplish.”

Part of what kept Chelesa going was her mother. “She works very very hard and I made sure I was doing the same, if not more. She was always helping me out and was such a great support so I had to do it for her,” she said. Shepard often read to Chelesa and her siblings at a young age. “I remember her reading Mrs. Nelson Went Missing, Are You My Mother, a lot of Dr. Seuss. She developed my love for reading at a very early age,” Chelesa said.

Another example of what someone might accomplish in spite of the reactionary old farts in charge of American politics. Neither the federal government nor the hacks in the Georgia State House do the young folks of our nation any great amount of good. Whether it’s education or opportunity the kids who are the future of the United States have to battle past the handicaps generously provided by politicians loyal only to the corporate barons who own their sorry hide.

Special congratulations to young Miss Chelesa Fearce. She proved the strength of a real American in the face of obstacles created by the worst of our culture. 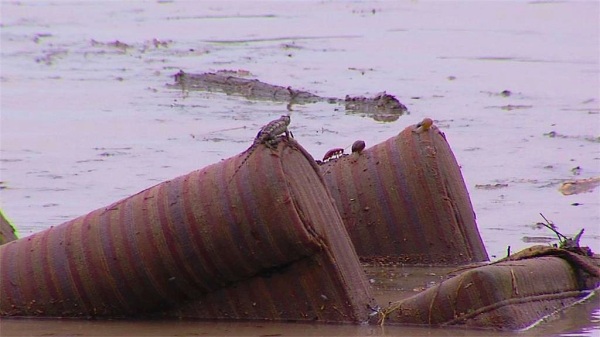 A news photographer was shooting video of a couch floating in the floodwaters in San Antonio. When he zoomed in, he spotted a lizard and some of the biggest coach roaches ever seen taking a ride.

Some of the World War II-era munitions recovered in recent months from Deseret Chemical Depot landfills have been found to contain mustard, a liquid blistering agent.

The depot’s Chemical Agent Disposal Facility, 20 miles south of Tooele, was shut down in January 2012 with the incineration of the last of a decades-old stockpile of chemical weapons.

But still remaining on the 19,000-acre property are 27 informal dumps, where weapons and debris were burned over the decades before environmental hazards were recognized. The Army began cleaning up these non-stockpiled weapons late last year, removing surface pollution and testing for underground pollution…

The mustard-filled munitions…were discovered in a landfill near the depot’s southern edge, said spokeswoman Alaine Grieser. “We anticipate we’ll find a few more.”

The Army used a Portable Isotopic Neutron Spectroscopy (PINS) system, sort of like an X-ray, to detect the hazardous contents. The cartridges were packed in airtight containers, and at a later date will be loaded in to a portable “Explosive Destruction System,” cracked open and chemically neutralized, Grieser said.

The Army is about halfway through the landfill and has removed about 40,000 munitions discarded between 1945 and 1978.

“Back then, it wasn’t uncommon to dig trenches and take the munitions and dump them in there and light them on fire with diesel,” said Brad Maulding, hazardous-waste facilities manager at the state Department of Environmental Quality (DEQ). “They didn’t question the long-term environmental effects or whether burning was adequate…”

Environmental groups say the landfills should remind future generations of how something dangerous is easily mishandled.

“We have to realize that Utah is a place where lots of materials like this gets brought,” said Matt Pacenza, policy director for HEAL Utah. “Whether it’s nuclear waste or chemical weapons, we need to be constantly vigilant and skeptical when companies say, ‘Don’t worry about it. It’s safe.’ “

After the tortured use of chemical weapons in World War 1 the Geneva Protocols of 1925 prohibited chemical warfare including the use of weapons like those found in Deseret. Their presence is no surprise. Deseret being only one of several locations around the United States where our government stored and eventually destroyed stockpiles of such anti-human weapons.

What? Did you think we obeyed international law on the production of such weapons?