For European lenders with private-banking aspirations, a presence in Switzerland used to be a must. Now, with bank secrecy eroding and rising compliance costs chipping away at profits, more are saying adieu.

The number of foreign-owned Swiss banks fell to 129 by the end of May from 145 at the start of 2012, according to data from the Association of Foreign Banks in Switzerland. Assets under management slid by a quarter to $921 billion in the five years through 2012 as clients withdrew money or paid taxes on undeclared accounts…

…While Switzerland remains the biggest center for global offshore wealth with $2.2 trillion or about 26 percent of the market…departures may further chip away at the Alpine republic’s status.

“There will be a bit of a shakeout among private banks,” said Felix Wenger…co-head of the private-banking practice at consulting firm McKinsey & Co…“Specifically for Switzerland, some foreign players might conclude that an exit is a better option…”

The U.S. has been investigating Swiss banks and units of foreign banks in the country, including that of London-based HSBC, after UBS AG (UBSN) in 2009 avoided prosecution by admitting it fostered tax evasion and delivering data on about 4,700 accounts of Americans. France and Germany have been searching for tax dodgers using data stolen from Swiss banks and also sharing some of the information with authorities in other European countries.

Agreements with the U.K. and Austria to collect taxes on behalf of those countries on accounts held in Switzerland have been in force since January, and Switzerland is in talks with other European countries on taxing secret accounts. The country will join the international push against tax dodgers and help develop global standards allowing banks to share customers’ details to combat tax evasion, Finance Minister Eveline Widmer-Schlumpf said in June…

Everyone is so nice and polite. Fact is we’re discussing corruption and theft, money owed to any number of nations. Looks like Mitt Romney will have to move a couple of chairs over to make room in the Cayman Islands for more of his cheapskate buddies to move in from Switzerland.

It’s a testament to U.S. Secretary of State John Kerry’s grit, determination and self-assurance that he refuses to give up in his quest to bring Israelis and Palestinians back to the negotiating table. But I wish that he would, during the long slog toward renewed talks, ask himself one question: Why didn’t his predecessor, Hillary Clinton, apply herself to the problem in the same manner?

Certainly, Clinton possesses the same qualities of fortitude and indefatigability. No one is more tenacious than Clinton when she identifies a goal worth pursuing. So why did she resolutely avoid this issue? The answer is simple: She saw no reasonable chance for success, even success modestly defined.

The goal Kerry has in mind — getting Israeli Prime Minister Benjamin Netanyahu and Palestinian Authority President Mahmoud Abbas together for direct talks about the most divisive issues — won’t be achieved. Both the Palestinians and Israelis know that Kerry’s proposed negotiations won’t work, but neither party wants to upset Kerry by saying so, and neither wants to be perceived as uninterested in compromise. So they may meet, and then maybe they will meet again and maybe they will even meet after that. But peace, and a Palestinian state that would be the byproduct of peace, won’t happen, not now and not in the foreseeable future…

Bloomberg columnist, Jeffrey Goldberg, then lists some of Kerry’s delusions. RTFA if you need reminding.

He then proposes a couple of modest ideas.

If Israel were to make a limited gesture on settlements to the Palestinians, and if the Palestinian Authority would make a sincere effort to return to technocracy, then it might be worth trying to bring Netanyahu and Abbas together.

Right now, though, there’s no point. One day soon, Kerry will understand why.

One pleasant aspect of perusing any of the Bloomberg websites is that you might run into an educated comment. Rather than work out my gut reaction to the questions inherent in the opinion piece above, I think I’ll just quote a comment from the website:

…Of course it IS blindingly obvious that in the present circumstances there isn’t the slightest chance of “progress”…But for some strange reason you can’t quite muster up the honesty to state the reasons why. Even though you clearly know why.

A. The Israeli regime has no intention of ever giving the Palestinians anything, not even a set of Bantustans. See the Likud charter. Read any Israeli newspaper.

“Israel’s ruling party and the governing coalition are staunchly opposed to a two-state solution and would block the creation of a Palestinian state if such a proposal ever came to a vote, Deputy Defense Minister Danny Danon said, contradicting statements by Prime Minister Benjamin Netanyahu and senior cabinet members who say Jerusalem is committed to the principle of two states for two peoples…”

For goodness sake this was less than a month ago! Wait, do you think Danon is lying or exaggerating? Please.

B. The US regime has no intention of ever applying the kind of pressure on Israel such as would be necessary to induce it to change its ways and abide by international law and UN resolutions. The Israel lobby in conjunction with the corrupt US Congress makes sure of that… 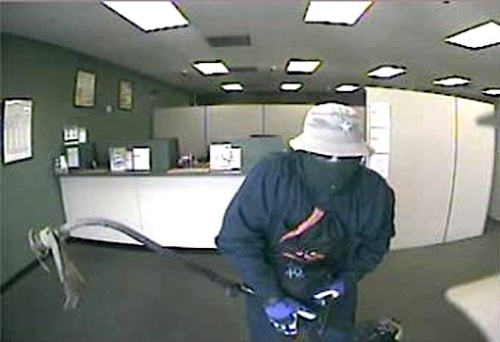 Las Cruces Crime Stoppers is offering a $1,000 reward for information that helps identify the suspect who stole cash from a Check “N Go store Saturday morning…The robbery occurred at around 9:15 a.m…at the Check “N Go at 400 N. Telshor Blvd, according to a Las Cruces Police new release.

Detectives learned that a man posing as a landscaper walked into the business, demanded money from an employee and left with an undisclosed amount of cash. The suspect was last seen leaving the business and walking south along Telshor Boulevard.

The suspect was described as a man about 6-feet tall with a stocky build. He was wearing what appeared to be a blue jump suit, gloves, a mask and a khaki fisherman’s bucket hat. The suspect was carrying a string trimmer or more commonly referred to as a weed-whacker.

Have any info – call crimestoppers when you’re through laughing.

Normally, this would end up being the dumb crime of the day – except for the clerk at this payday lender handing over the loot! A fridge full of free beer sounds like a great thing to find sitting on a street corner, but what if you needed a Canadian to open it? That was the puzzle posed by the Rethink advertising agency on behalf of Canada’s Molson brewery. This northern spring, Rethink set up red fridges at various locations around Europe that would only open if a Canadian passport was inserted.

The fridges were set up in Canterbury, London, the White Cliffs of Dover, Cassel in northern France, Brussels, and somewhere in rural Belgium. Along with bottles of Molson beer, the fridge had a plexiglass holder with a spring-loaded catch. Inserting a passport told a computer to capture an image of the passport with a modified webcam. It read the image and if it matched the crest on a Canadian passport, it released the latch on the fridge.

While the stunt was part of an advertising campaign, we’re sure a few traveling Canadians also made some new friends as result of the promotion. That is, provided they were carrying their passports with them when called upon.

Malte Spitz is a member of the German Green Party

In May 2010, I received a brown envelope. In it was a CD with an encrypted file containing six months of my life. Six months of metadata, stored by my cellphone provider, T-Mobile. This list of metadata contained 35,830 records. That’s 35,830 times my phone company knew if, where and when I was surfing the Web, calling or texting.

The truth is that phone companies have this data on every customer. I got mine because, in 2009, I filed a suit against T-Mobile for the release of all the data on me that had been gathered and stored. The reason this information had been preserved for six months was because of Germany’s implementation of a 2006 European Union directive…

This “preventive measure” was met with huge opposition in Germany. Lawyers, journalists, doctors, unions and civil liberties activists started to protest. In 2008, almost 35,000 people signed on to a constitutional challenge to the law. In Berlin, tens of thousands of people took to the streets to protest data retention. In the end, the Constitutional Court ruled that the implementation of the European Union directive was, in fact, unconstitutional.

In Germany, whenever the government begins to infringe on individual freedom, society stands up. Given our history, we Germans are not willing to trade in our liberty for potentially better security. Germans have experienced firsthand what happens when the government knows too much about someone. In the past 80 years, Germans have felt the betrayal of neighbors who informed for the Gestapo and the fear that best friends might be potential informants for the Stasi. Homes were tapped. Millions were monitored…

With Edward J. Snowden’s important revelations fresh in our minds, Germans were eager to hear President Obama’s recent speech in Berlin. But the Barack Obama who spoke in front of the Brandenburg Gate to a few thousand people on June 19 looked a lot different from the one who spoke in front of the Siegessäule in July 2008 in front of more than 200,000 people, who had gathered in the heart of Berlin to listen to Mr. Obama, then running for president. His political agenda as a candidate was a breath of fresh air compared with that of George W. Bush. Mr. Obama aimed to close the Guantánamo Bay detention camp, end mass surveillance in the so-called war on terror and defend individual freedom.

But the senator who promised to shut Guantánamo is now a second-term president who is still fighting for its closure. And the events of the past few weeks concerning the collection of metadata and private e-mail and social-media content have made many Germans further question Mr. Obama’s proclaimed commitment to the individual freedoms we hold dear.

We ended up with a Harvard lawyer trained to distort freedoms to fit into a legalese framework that our Constitution allows – and somehow that aligns with the spirit of that document. But, the Bill of Rights was added because of the shortcoming within that first document penned by a group of consensus-laden politicians.

The tradition has been carried forward by political hacks from the two parties we’re allowed. Diminishing the freedom of individual citizens is considered fair game by the same category of lawyers who made corporations into people. Our difference in economic standing notwithstanding.

Obama’s ethics are nothing but the same old crap centrism, a middle-of-the-road litany designed to save reactionary economics and limited freedom.