This ancient thaw may have caused sea levels to rise by approximately 20 metres, scientists report…in the journal Nature Geoscience.

The researchers, from Imperial College London, and their academic partners studied mud samples to learn about ancient melting of the East Antarctic ice sheet. They discovered that melting took place repeatedly between five and three million years ago, during a geological period called Pliocene Epoch, which may have caused sea levels to rise approximately ten metres.

Scientists have previously known that the ice sheets of West Antarctica and Greenland partially melted around the same time. The team say that this may have caused sea levels to rise by a total of 20 metres.

The academics say understanding this glacial melting during the Pliocene Epoch may give us insights into how sea levels could rise as a consequence of current global warming. This is because the Pliocene Epoch had carbon dioxide concentrations similar to now and global temperatures comparable to those predicted for the end of this century…

The East Antarctic ice sheet is the largest ice mass on Earth, roughly the size of Australia. The ice sheet has fluctuated in size since its formation 34 million years ago, but scientists have previously assumed that it had stabilised around 14 million years ago.

The team in this study were able to determine that the ice sheet had partially melted during this “stable” period by analysing the chemical content of mud in sediments. These were drilled from depths of more than three kilometres below sea level off the coast of Antarctica.

Analysing the mud revealed a chemical fingerprint that enabled the team to trace where it came from on the continent. They discovered that the mud originated from rocks that are currently hidden under the ice sheet. The only way that significant amounts of this mud could have been deposited as sediment in the sea would be if the ice sheet had retreated inland and eroded these rocks, say the team.

The academics suggest that the melting of the ice sheet may have been caused in part by the fact that some of it rests in basins below sea level. This puts the ice in direct contact with seawater and when the ocean warms, as it did during the Pliocene, the ice sheet becomes vulnerable to melting.

Meanwhile, Congress continues tax breaks and subsidies to oil companies which directly cost American taxpayers billion$ of dollars. What they cost the whole planet is so much more, so much more important and, therefore, unnoticed by know-nothings elected by idjits.

The Palestinians played down on Monday the significance of an imminent meeting in Washington of their top peace envoy with his Israeli counterpart, saying formal negotiation would not begin unless their opening terms were satisfied.

The Palestinian position seemed to run counter to U.S. hopes that bringing together Saeb Erekat and Israel’s Tzipi Livni in the coming days would kick-start peacemaking stalled for almost three years over Jewish settlements in the occupied West Bank…

Netanyahu says the new talks must be held without “preconditions”, especially regarding the borders of the state Palestinians want to found in the West Bank, East Jerusalem and Gaza Strip, which Israel captured in the 1967 Middle East war.

Though it withdrew from Gaza in 2005, Israel deems all of Jerusalem its undivided capital – a status not accepted internationally – and wants to keep swathes of West Bank settlements under any eventual peace accord.

Palestinians insist no negotiations can be held until all sides agree the pre-1967 borders would be their basis.

Abbas spokesman Nabil Abu Rdaineh said Erekat had yet to be invited to Washington. When he goes, Abu Rdaineh said, it would be first to determine the framework of any future negotiations.

“If they reach an agreement over the details, in accordance to the Palestinian demands, then the launch of negotiations will be announced,” Abu Rdaineh told Reuters on Monday…

There aren’t any reasonable nations, East or West, who disagree with so-called preconditions which, after all, only require historic reality. Only the United States is ready to cave-in to mystical Israeli predestination.

Denouncing the West Bank settlements as illegal – a view shared by most world powers – Abbas told Al-Rai that Israel should “get out of Palestinian land completely“.

That the whole world is watching doesn’t mean a whole boatload to Netanyahu or Kerry. The tapdance continues with Bebe bragging the playacting is part of a “strategic process to tighten relations with the United States”.

Kerry asks Netanyahu what he must do to look as if he’s achieving anything and Netanyahu will demand a raise in the annual bailout for Israel’s economy – paid for by US taxpayers.

An unusual amusement park attraction in the central Mexican state of Hidalgo offers visitors the thrills and chills of an illegal border crossing. The attraction takes visitors through a fake United States-Mexico border, complete with fake smugglers and fake border patrol agents…

The actual U.S.-Mexico border is nearly 800 miles away from the Parque EcoAlberto. The park is part of the indigenous HñaHñu community. Tourist can enjoy other recreational attractions like hot springs and rappelling, in addition to the recently added fake border crossing.

But for those who want to simulate the experience of fleeing across the border, without the real danger, the latter attraction is for you. For three hours, tourist groups endure sirens, dogs, chases and the fake border patrol yelling threats…

Maribel Garcia works as an administrator for the park. She says the purpose of the Night Walk is simple.

“Our objective is to stop the immigration that exists amongst our citizens, principally from the state of Mexico to the U.S.,” Garcia said in Spanish…

Titi, who also works as a coyote on the Night Walks, was emphatic that it was not training for future generations.

“We try to help people so that they won’t leave,” Titi said in Spanish. “It’s time to create some employment, to work with our own and regenerate everything, or at least what we can, even though it might be slow going.”

The HñaHñu’s efforts are well timed. According to one estimate, for first time since the 1960s there is net-zero migration from Mexico to the U.S. Increased border patrol, stricter laws in the U.S., rising smuggling fees, violence in the desert and the struggling U.S. economy are keeping more Mexicans at home.

Of course, there aren’t any Republicans who will believe the net-zero thingie. Half will insist there are undocumentados hiding behind every state employment office. The other half are looking for a replacement gardener to cut their lawn. 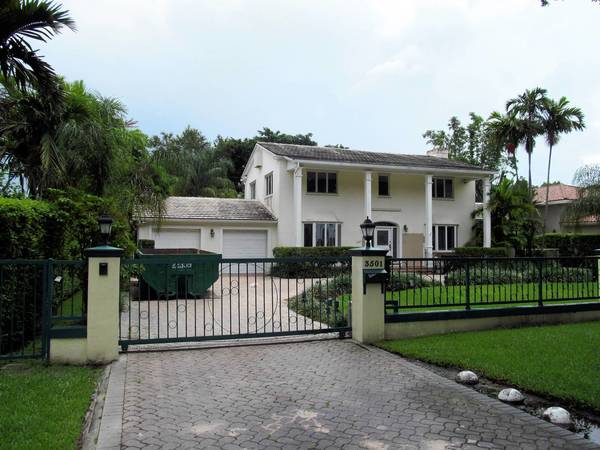 Coral Gables, Florida. — Marine Gen. John F. Kelly works in a fortress-like headquarters near the Miami airport. Starting this fall, he will live in Casa Sur, an elegant home with a pool and gardens on one of the area’s swankiest streets.

The five-bedroom residence, across the street from the famed Biltmore Golf Course, is provided rent-free to Kelly as head of U.S. Southern Command, which oversees military operations in the Caribbean Latin America.

Casa Sur is one of hundreds of high-end homes, villas and mansions where senior generals and admirals are billeted, according to a Pentagon report prepared for Congress last month but not publicly released…

The perks for top military brass, a Pentagon tradition, are under increasing scrutiny in Congress at a time when budget reductions and the mandatory spending cuts known as the sequester have forced the Pentagon to cut services, close facilities, cancel training and missions, and furlough 680,000 civilian workers…

In the annual appropriations bill for military construction approved by a House committee last month, lawmakers criticized the Pentagon for the “excessive cost” of maintaining “large and aging” homes and for the “apparent unwillingness on the part of the [military] services to seek less expensive alternatives…”

Generals and admirals say they need large houses with high security — as well as cooks and gardeners — because they often host visiting dignitaries or preside at ceremonial events. Keeping pricey properties makes fiscal sense, they argue, because the Pentagon either already owns them or would waste money finding a suitable rental every time a senior officer is moved to a new command…

To save money, the military has moved to privatize base housing in recent decades. But the services have clung to some of the most desirable real estate for top officers…

Kelly, a former Marine commander in Iraq who was top military aide to former Defense Secretary Leon E. Panetta, has lived in a smaller house nearby since he took over Southern Command last year. He is scheduled to move into his new digs in October.

Life is tough ain’t it?

RTFA for lots of details, lots of crocodile tears.