You actually had the balls to say – Mission Accomplished!

A court in Milan has banned Silvio Berlusconi, Italy’s former prime minister, from holding public office for two years, following his conviction for tax fraud…However, the ban must be approved by parliament before taking effect.

Earlier this month, a cross-party panel of the Italian Senate recommended his expulsion from the chamber.

If he is expelled from parliament, Berlusconi will lose his immunity from prosecution in a string of criminal cases.

He will also spend a year under house arrest, or doing community service – his preferred option, according to a request he formally submitted last week.

The votes on his expulsion and ban on holding office are expected to take place within the next few weeks.

He was sentenced to four years in prison, automatically reduced to one under a 2006 pardon act. He was also banned from holding public office for five years.

That sentence was upheld in August.

As erratic as the course of justice may be in Italian politics, by comparison, this case is one more example of the ineffectual and cowardly attitude towards politicians in the United States. Liars and frauds like George W. Bush and Dick Cheney committed inexcusable crimes against humanity – and left taxpayers with a bill for trillions of dollars.

The financial cost is conveniently forgotten by Republicans. The ethical failure is ignored by both of the TweedleDeeDum parties we are allowed. Add to this Obama’s legalization of government snooping into the lives of ordinary citizens and you need no explanation as to why America’s international reputation for corruption continues to grow.

Norway is Europe’s undisputed electric vehicle leader. It is also Europe’s largest oil producer. The way these two facts intertwine is what The Globe And Mail calls “ironisk,” the Norwegian word for, well, you can probably guess.

That irony has some interesting highlights. The Tesla Model S was the best-selling car in Norway last month. Meanwhile, in the 70 oil fields in the waters around the Northern European country are producing two million barrels of oil per day…Norway exports a lot of oil and puts the money into something called the Government Pension Fund, which is now worth more than $725 billion US. Some of that money is “recycled,” as it were, into government subsidies for electric vehicles. Or, as The Globe And Mail puts it, “Norway’s present and future rest solely on everyone else in the world not buying Tesla Model S cars or electric vehicles of any sort.”

It’s not that dramatic, we don’t think, but Norway’s shunning of and reliance on the oil industry is a story worth investigating. Especially since the EV subsidies are much bigger there than most other places. Reuters said back in March that the total incentives (purchase subsidies, road toll exemptions, free parking, etc.) for EVs can total up to $8,200 per car, per year. We can only imagine what the sales numbers would be in the US if the American’s offered something similar.

Not surprising to someone who knows much Euro history, the essential political divisions between Conservative and Labor. Both flavors understanding the responsibility which government assumes to the whole population. The American split between Republicans dedicated to the most regressive segments of Big Business – perfectly willing to screw the whole population including small biz owners – and Democrats dedicated to trial lawyers and lobbyists for successful technologies below the Chamber of Commerce top tier.

Both sides of the pond are capable of more or less successful wings of Left political organizations, though the success of Greens in Europe so far has nothing comparable in the US. Both sides of the pond are capable of ultra-nationalist fascist dedication to the most reactionary industries – adopting populist lies common to Brown Shirts and the Tea Party…ignoranuses useful for their predilection towards violence and led around by the nose by the very power brokers they blame for a portion of their ills.

Understanding that government, bureaucrats, public servants all serve the needs of the whole country is a portion of modern capitalism that never especially made it to our shores. While Communists and Social Democrats in Europe could be counted on to press ethical standards on government and industry alike, comparable ideological streams never had much success at the same task here.

The federal air marshal arrested Thursday for allegedly taking cell phone photos underneath women’s dresses and skirts as they boarded a Nashville flight has been relieved of all duties, according to the Federal Air Marshal Service.

Adam J. Bartsch, 28, was charged with disorderly conduct after police said he admitted to the alleged crime…

A police affidavit said a witness grabbed Bartsch’s cell phone during the boarding of Southwest Airlines flight 3132 from Nashville to Tampa and showed it to a flight attendant.

“The Transportation Security Administration does not tolerate that sort of criminal behavior,” said Michael Pascarella, spokesman for the Federal Air Marshal Service, which is overseen by the TSA.

Pascarella said Bartsch had been relieved of his duties. The TSA is in the process of suspending or terminating his employment.

Bartsch was released from jail Thursday night on a $10,000 bond…He has worked for the TSA for about three years, Pascarella said.

That explains it. I thought the air marshals were actually part of some responsible police body, part of the federal government. So – they’re part of the TSA – and one step above the guys who steal from your luggage and prod your butt looking for explosives while you’re trying to catch a flight. 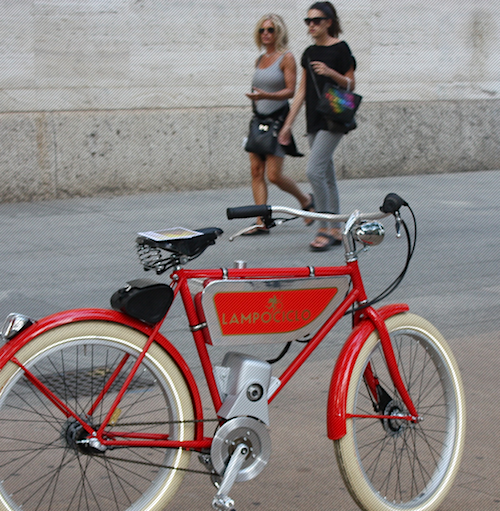 Back in their earliest days, motorcycles were little more than bicycles with engines. Italian manufacturer Lampociclo is trying to bring that simple, timeless style back for the modern day e-bike market. Its bikes combine the latest technology with styling cues from a time gone by…

Though its bikes also bear similarities to older models, such as the Werner Motocyclette from around the turn of the century, Lampociclo says its design ethic is inspired specifically by motorcycles from the 1920s. This retro influence comes through in available components like the springy leather saddle, oversized LED headlight and handlebars.

Lampociclo’s motor and battery look large and unwieldy compared to the hub motors and frame-integrated batteries of other modern e-bike designs, but they mirror the frame-filling engines and tanks of classic motor bicycles from the likes of Indian and Harley-Davidson. The battery is stored in the lockable, hand-welded aluminum “tank” hanging from the top tube. That tank even comes complete with an available “gas cap” covering the charging port. The lithium iron phosphate battery takes about six hours to charge…

Each Lampociclo bike is handcrafted and custom built, giving the buyer much input into its equipment. He or she can select from different gearbox, saddle, grip, wheel and handlebar options, as well as add accessories like baskets and racks. The steel frame comes in three different sizes and a variety of colors.

They don’t have list pricing because they consider each bike a hand-built special – but you can probably get a quote through their website.

The concept ain’t silly at all. Electric bikes are booming in Asia. No doubt our right-wing politicians will work to guarantee a slow enough recovery – if not another crash – to keep jobs scarce. Just the right transportation when you haven’t any spare cash.

Yes, that may just mean something more like WalMart than Lampociclo.