“By 2070, the passenger road market could be nearly oil-free.” That’s the key line…in a report out from Shell titled New Lens Scenarios. The oil giant is trying to understand the future…and to do that, it envisioned two possible futures, one called “Mountains” and the other “Oceans.”

The two scenarios have some things in common: the idea of a world population at nine billion by 2050, increased prosperity and global energy demand. Given those situations, what’s the world going to come to? No one knows for sure, but here are Shell’s guesses, in short:

“Mountains” implies “a strong role for government” that is not afraid to implement “far-reaching policy measures.” These measures mean that cities will develop in more compact ways and “new policies unlock plentiful natural gas resources – making it the largest global energy source by the 2030s – and accelerate carbon capture and storage technology, supporting a cleaner energy system.” That sounds like it has some potential, but the problem is that, “nevertheless, the global average temperature rise overshoots the current 2°C goal.”

“Oceans,” on the other hand takes place in “a more prosperous and volatile world.” This is the scenario where solar overtakes natural gas as the world’s largest energy source as “power is more widely distributed and governments take longer to agree major decisions.” Oil and coal power stick around, but they’re slowly replaced by renewable energy. This, too, isn’t an ideal solution, since “these measures are not sufficient to address environmental concerns, as greenhouse gas emissions follow a pathway towards a high degree of climate change.”

You can get the full 48-page PDF here…A key prediction comes on page 20, in a section called “A Changing Transportation Infrastructure.” The long-term view is that:

By 2070, the passenger road market could be nearly oil-free and towards the end of the century an extensive hydrogen infrastructure rollout displaces oil demand for long haul and heavy loads. By this time, electricity and hydrogen may dominate, and affordable, plug-in, hybrid hydrogen vehicles offer the ultimate in flexibility and efficiency.

The future is only a shock to the people afraid or too thoughtless to participate. As an optimist – particularly one who participates to a small extent with devotees of the discipline who would also combine philosophy, social and political activism with their lives – I’m confident in our capacity to deal with the problems we confront, the questions needing to be answered.

As a cynic…just not in my remaining lifetime.

The Taliban Tea Party will continue to press forward towards their version of the 19th Century whether or not the rest of the Republican Party volunteers. The Koch Bros will continue their funding at least as long as their ilk funded the John Birch Society.

The only surprise has been the number of Republicans in elective office with as little backbone as Democrats. You would think that with as many years experience as some have, dedication to Big Business and Capitalism as a class would trump fealty to Big Oil and extractive industries alone – and the promise of more support for hating women, Latinos, Black people, trade unions, intelligentsia, artists and pretty much everyone outside the borders of the GOUSA. 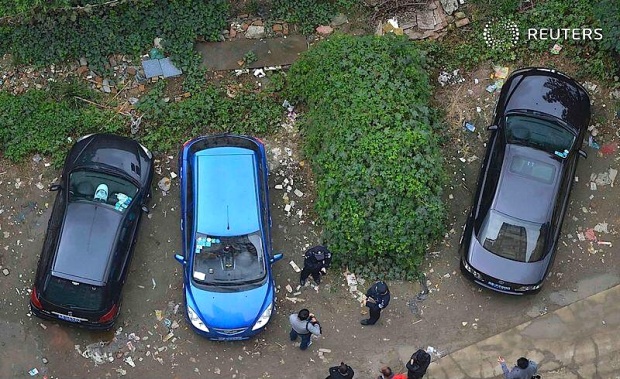 Police and bystanders look at a car which is covered with vegetation after it was left parked at a neighbourhood for more than a year, in Chengdu, Sichuan province.

Civilians account for almost one fifth of the deaths from U.S. drone strikes in Pakistan over the past decade, a U.N. report says…Of the approximately 2,200 Pakistanis who have died in drone strikes, the report says 400 (18 percent) were not militants…

Ben Emmerson, a U.N. special rapporteur who wrote the report, said that Pakistani officials who provided the number indicate that, “owing to underreporting and obstacles to effective investigation, those figures were likely to be an underestimate.”

Some 31 civilians have been killed in drone attacks in Afghanistan and between 12 and 18 in Yemen in the past 18 months, the report added.

The 22-page report was released ahead of a debate on the use of remotely piloted aircraft scheduled for next Friday at the U.N. General Assembly, The Guardian reported…

Emmerson contrasted British and U.S. policies on drone usage. He said Britain’s Royal Air Force “thoroughly scrubbed” its intelligence before authorizing the use of drones. As a result, he said, there had been only one incident in which civilians were killed.

The CIA’s use of drones had created “an almost insurmountable obstacle to transparency,” Emmerson said. Consequently, the United States has not revealed any data about the number of civilians killed or injured by drone strikes.

Here in the States we’re faced with the Pentagon, Defense [War] Department officials, the White house [regardless of who’s in office] and Congress ready and willing to legalize attacks upon foreign soil around the world. They will figure out some way to satisfy themselves – if not the public – about the death of civilian non-combatants under any circumstances.

This is how the US manages transparency.