Gov. Chris Christie dropped his legal challenge to same-sex marriages on Monday, removing the possibility that the vows of couples who began getting married hours earlier could be undone by a court.

…The announcement came from a Republican governor who is a possible 2016 presidential candidate and has for years opposed gay marriage while supporting the state’s previous civil union law.

It was met with jubilation from gay rights advocates including Steven Goldstein, the founder and former leader of Garden State Equality, who asked “How much happiness can I stand..?”

The decision caught some by surprise, but not Larry Lustberg, one of the lawyers on the case on behalf of gay couples and Garden State Equality. “The handwriting was on the wall as clearly as it could possibly be. The governor had always said he would fight this all the way up to the Supreme Court, but he didn’t say he was going to fight it in the Supreme Court twice,” he said in a conference call. “This was inevitable.”

The letter detailing Christie’s decision, from the Acting New Jersey Attorney General John Hoffman to the Supreme Court, was just two sentences and didn’t get into detail…

Last year, the state Legislature passed a law to allow gay marriage and deal with those issues, but Christie vetoed it.

In Newark, Mayor Cory Booker, in one of his last acts before joining the U.S. Senate in coming weeks, led a ceremony for seven gay couples and two heterosexual couples.

“Tonight we have crossed a barrier, and now, while you all have fallen into love, I want to say that the truth is, that the state of New Jersey has risen to love,” he said. “This state now is resonant now with the core values of our county, with the idea that there is no second class citizenship in America, that we’re all equal under the law.”

Like pretty much every case involving civil rights in America – long overdue.

Christie deserves little credit for recognizing the foolishness of continuing the suppression of equal opportunity for folks in the LGBT community. He recognizes the need to behave like a moderate if he ever intends to attract independent votes in a national campaign – like for president. He recognizes that living in one of the literate, educated, modern enclaves within the United States – instead of neo-Confederate backwardness – he needed to act like someone with a reasonable understanding of constitutional law.

Even though he stands damned near alone among potential candidates on the national stage of Republican office-holders. 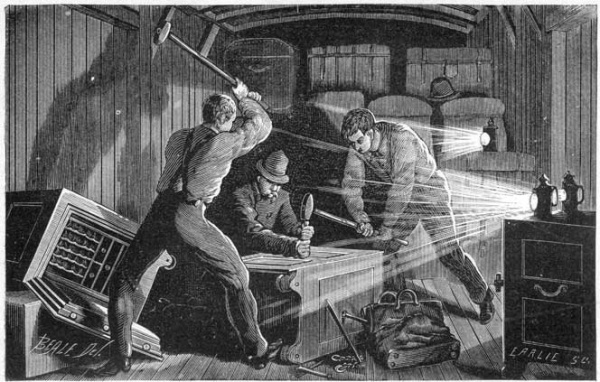 Thieves in Stockholm who made off with a safe may have got more than they bargained for when it emerged the safe didn’t contain any money, but rather ten kilos of gunpowder that could explode if the safe was opened.

The theft occurred in the Åkersberga region south of the capital on Sunday night reports the Mitt i Stockholm newspaper. Staff discovered the safe had gone missing and alerted the authorities.

According to local police, the thieves risk blowing themselves up if they attempt to pry open the safe to discover the contents.

“They probably think it has money but in fact the safe has ten kilos of gunpowder. A man who works at the company said that is enough to move 40 tonnes of rock,” said Mikael Pelagalli to Mitt i Stockholm.

He added that the safe will likely blow up if the thieves use a blowtorch to cut it open. Police are using the media in order to warn the burglars about the risks of their raided goods before it is too late.

Local coppers may be able to track down what’s left of the gang using the seismograph at the University of Stockholm.

The Foreign Intelligence Surveillance Court released a new legal opinion on Friday that reauthorized the once-secret National Security Agency program that keeps records of every American’s phone calls. The opinion also sought to plug a hole in a similar ruling made public last month.

Judge Eagan’s opinion, which was made public last month, held that the N.S.A. could lawfully collect the bulk data about all Americans’ calls without warrants, in part because of a 1979 case, Smith v. Maryland. In that matter, the Supreme Court held that call records were not protected by the Fourth Amendment because suspects had exposed that metadata to their phone companies and had no reasonable expectation of privacy.

Judge Eagan’s opinion has been criticized, in part, because she made no mention of a landmark privacy case decided by the Supreme Court in 2012. That case, United States v. Jones, held that it was unconstitutional for the police to use a GPS tracking device to monitor a suspect’s movements without a warrant.

Although the Supreme Court decided the case on narrow grounds — citing that the police had to trespass on the suspect’s property when installing the device — five of the nine justices separately called into question whether the 1979 precedent was valid in an era of modern technology. They suggested that the automated long-term collection of data about someone’s location might raise Fourth Amendment issues even though each individual movement is disclosed to other people.

In her new opinion, Judge McLaughlin acknowledged the existence of the 2012 case but explained…“The Supreme Court may someday revisit the third-party disclosure principle in the context of 21st-century communications technology, but that day has not arrived,” so the 1979 precedent remains the controlling legal precedent, she wrote.

Captive courtrooms like those of Judges Eagan and McLaughlin – and Walton, noted at the end of the article – spend most of their judicial time writing opinions to justify decisions made on behalf of the NSA. Questions of year or century don’t really mean a whole boatload to predictable decisions.

RTFA if you think you’re missing anything. You get to see Walton declare his independence because he asked for more information a number of times – but never stepped out of line on his rulings.