Spain’s public prosecutor’s office announce…that it had launched a preliminary inquiry into the alleged widespread surveillance of Spanish citizens’ private phone calls and emails by the US National Security Agency, to determine whether it could be prosecuted under Spanish law.

It was reported on Monday that the NSA had monitored 60.5m Spanish phone calls in the space of one month alone, in the latest revelations from the documents leaked by the US whistleblower Edward Snowden…

The outcry comes days after it emerged that the NSA spied on the phone calls of scores of allies, including the personal phone of the German chancellor, Angela Merkel.

On Monday, the Spanish foreign minister warned the US that, if the monitoring of tens of millions of phone calls was confirmed, it could “lead to a breakdown in the traditional trust” between the two countries. José Manuel García Margallo said that the NSA’s alleged activities could have broken Spain’s privacy laws, which prohibit the collecting of data in relation to electronic communications.

Madrid had earlier on Monday summoned the US ambassador to Spain, James Costos, to meet with government officials and explain the extent of US surveillance…

Many in Spain feel that the government has not done enough to protect its own interests and had previously shown a surprisingly relaxed attitude to US spying when the allegations first began to emerge in the press last week. Human rights groups have called on the government, led by Mariano Rajoy of the rightwing People’s party, to do more to protect its citizens.

Rajoy fits snugly into the mold of Spanish right-wingers. I’d be mightily surprised if he’s interested in protecting much more than Spanish bankers, the Roman Catholic church – and his own wallet.

Lots of people announce the birth of their baby on Facebook – but not many get a congratulatory tweet back from the president. Yet that’s what happened to Lebanese couple Kholoud Sukkarieh and Nidal Darwish.

Earlier this year, they became the first couple to have a secular, civil marriage in Lebanon. Now, their baby – one-month-old Ghadi – has reportedly become the first child registered there without a sect specified on its birth certificate. The pair announced the news on their Twitter and Facebook accounts, and the response from President Michel Suleiman came a few hours later. “It was nice surprise that he congratulated us – we didn’t expect it,” Ms Sukkarieh told the BBC.

In Lebanon, a person’s religious sect matters in everyday life. Military and public sector jobs are allocated according to a religious-based quota system. This approach extends to the top level of government too – the president must be a Maronite Christian, the prime minister a Sunni Muslim and the speaker of parliament a Shia.

But Ms Sukkarieh and her husband argue that this system is unfair. Jobs should be allocated based on a person’s qualifications and abilities – and bringing sect into the equation is divisive, they say. The pair took advantage of a loophole in the law when they married in a civil ceremony. A handful of other couples have followed in their footsteps – and according to Ms Sukkarieh – they too are planning to leave the sect section blank on their children’s birth certificates.

Though the president has come out in support of their moves, there is not universal agreement within the rest of the government, or Lebanese society. After their marriage, some MPs in Lebanon attempted to get the law changed to explicitly allow civil marriages – but this was thwarted after complaints from a number of religious clerics. Ms Sukkarieh says it’s not about rejecting religion, but embracing a Lebanese national – rather than a sectarian – identity.

I pressed for – and won the ability with several surveying bodies – to include the choice of “citizen of Earth” for nationality. I figured that out along with becoming an atheist when I was 13-years-old. Still wonder why so many folks have a difficult time getting all that straight.

Nearly 17,000 kilometres of road were built in the Brazilian Amazon rainforest every year between 2004 and 2007.

Although road-building is a major contributor to deforestation and habitat loss, the way in which road networks develop is still poorly understood.

A new study is among the first to measure the number of roads built in a rainforest ecosystem over an extended period of time. It was published this month in the journal Regional Environmental Change by researchers including two Life Scientists from Imperial College London.

They say studies like this will help combat future deforestation by allowing for more accurate predictions of where it might occur.

Even though roads often occupy less than 2 per cent of a country’s land surface, they may have an ecological impact on an area up to ten times as large. These indirect effects can include changes in air and soil temperature and moisture, as well as restrictions on the movement of animals…

“A number of models currently exist which rely on this knowledge, but there are no good studies of how quickly roads get built and where they go when they are built.

“An understanding of road networks is the big missing gap in our ability to predict the future of this region.”

Members of the research team used pre-existing road maps and satellite imagery to track the evolution of the Brazilian Amazon road network over a period of three years, in collaboration with IMAZON, the Amazon Institute of People and the Environment.

They found that road networks spread most quickly in regions with high economic growth, as well as in areas where new settlements were being built. Once a region had an extensive network of roads in place, however, the rate of building slowed down.

Logical? Yes. Why the study, then? You need hard data to ever get those violating environmental standards ever to own up for what they’ve done. As it is, peer-reviewed studies are meaningful to the whole body of science, most courts of law – and damned few profiteering roadbuilders. 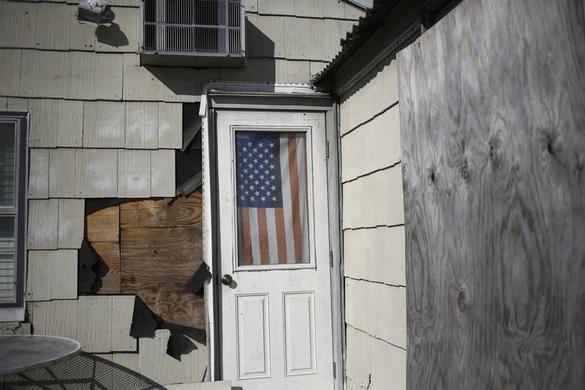 A homeowner who is part of America, not the Confederacy — REUTERS/Shannon Stapleton

An American flag is seen on the window of a door at the Breeezy Point community, which was damaged by hurricane Sandy in October 2012 in the borough of Queens in New York — photo taken October 28, 2013.

If you live in Oklahoma or Colorado and your Congresscritter voted against aid for the folks devastated by Sandy – but, they begged up for aid for you after a tornado or flood – please, give them what they deserve for being hypocrites and scumbags.

Vote ’em out of office and tell them to get an honest job!