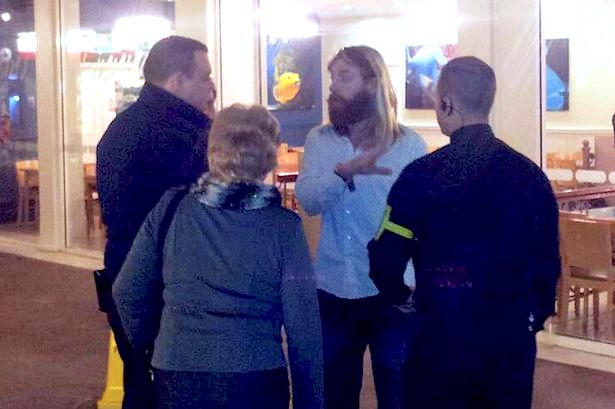 For the second year in a row, a British man with long hair and a beard was banned from attending a darts match in Minehead, Somerset, because he looks too much like Jesus.

Last year, Nathan Grindal was ejected from the Cash Converter Players Championship between Phil Taylor and Kim Huybrechts after “Jesus” chants started sweeping through the crowd and security personnel became fearful that the disturbance would interrupt the players.

This year, Grindal’s looks prevented him from even getting in the door.

He was going to collect his ticket to the event when “two big beef-head security guards, including the head of security, dragged me into the office where they told me they wouldn’t let me watch the darts this year,” he said.

“I felt quite intimidated. The head of security told me they would not be letting me into the tournament, because they did not want a repeat of last year. It’s not my fault I look like Jesus. I’m not trying to look like Jesus, I’m not even religious — I’m just an average Joe. I haven’t done anything wrong.”

Grindal is a laborer from Abingdon, Oxfordshire, and he keeps his beard long to hide scars on his face…

Frankly, I would sue their butts from here to Aberdeen. Grindal is a nicer guy than that. However, he’s hoping to be compensated for missing work and buying fuel for the 280-mile round trip.

2 thoughts on “Darts fan banned from match for looking like Jesus — Again!”