Possibly – my next wheels – with the smallish Eco-Boost turbo

The average fuel economy of new cars sold in the US is going back up after dropping for a couple of months. The University of Michigan Transportation Research Institute (UMTRI) calculated a 24.8 mpg average for new light-duty vehicles sold in the US during November 2013. That’s not as high as the 24.9 reported in August, but the numbers have been coming back up. The November rating was up 0.1 mpg from October.

Corporate average fuel economy is up 4.7 mpg since UMTRI researchers began documenting the data in October 2007. The figure is calculated by monthly sales figures of individual vehicle models and their combined city-highway fuel economy ratings published in the US Environmental Protection Agency’s EPA Fuel Economy Guide.

The Institute’s Eco-Driving Index also has seen improvements since the reporting began in 2007. The index tracks greenhouse gas emissions from a US driver who bought a new vehicle during the month. For September, the index was 0.80 for the fifth month in a row. That indicates a 20-percent improvement from the base score of 1 set in October 2007, said researcher Michael Sivak in a statement. The Eco-Driving Index figures in both the fuel used per distance driven and the amount of driving, Sivak said.

Yes, we continue to lag the world in improving the whole pool of vehicles on the road. Part of that is owed to the number of vehicles kept much longer as a result of our mediocre economy. Another sillier part is neurotic reaction to fluctuating gasoline prices. We never seem to learn to commit whole-heartedly to more efficient designs, still hoping to drive like someone in a 1950’s hot rod movie all the time.

I love the fact that if I decide to replace my 19-year-old pickup truck, I have some decent choices – though most of them are different body styles.

Mandela, 95, died Thursday after a lengthy battle with a recurring lung infection. He was imprisoned for 28 years for plotting to overthrow South Africa’s apartheid government, and was elected president in 1994.

In an appearance on NBC’s “Meet the Press,” Jackson said Mandela was successful in his fight against apartheid because he wasn’t motivated by revenge.

“Well, he was shaped by persecution and internal will and dignity and … he did not internalize the system. And to that extent, he was gracious because of victory. He won the battle over skin color apartheid and political right to vote and legal apartheid and international world opinion after he had a choice at that point to choose revenge or reconciliation. He chose reconciliation as a victor over that system,” Jackson said.

“Because at that moment … if he had chosen revenge, then you would have had a bloodshed. He chose to go forth by a kind of hope and not by fear. Those are choices the man made,” he added.

Mandela was a stellar example of the winner in a fight for freedom rejecting revenge. Now, try to communicate the value of that ethic to American neo-Confederates, the losers in our civil war to preserve the union and end slavery – who are still trying to exact revenge for that loss.

Since 1990, the rate of pregnancy has fallen for women in their 20s, the largest group of pregnant women, and teens, while the pregnancy rate among women over 30 has increased steadily with every passing year.

“What happened was a postponement of births among younger women with a longer time horizon,” said Andrew Cherlin, a sociologist at Johns Hopkins University. “Women over 30 couldn’t wait that much longer.”

According to Sally Curtin, one of the report’s authors, part of the drop can be attributed to fewer teenagers having sex, and greater contraceptive use among those who do have sex.

The original detailed study is over here.

American neo-cons fear informed, educated decisions. So much of the economics and ideology they believe can’t stand any sort of thorough examination much less the test of time. Ideology intertwined with religious beliefs that haven’t strayed far from the 14th Century. They really fear American women making those decisions.

But, women with education and understanding of their reproductive rights, constitutionally-guaranteed equal opportunity, the same rights to a career, family and individual achievement – throughout the industrial world – women often opt first and foremost to limit the time and circumstances of their life dedicated to child-bearing, child-rearing.

Nothing new about that. Though soft-minded journalists – usually male – can waste reams of newsprint and electrons in wonderment. Self-concern, self-guidance, occurs to women as readily as it does to men. It’s only a dazzling new phenomenon in a society which has bumbled along for millennia guided by only half the population. The half that doesn’t get pregnant. 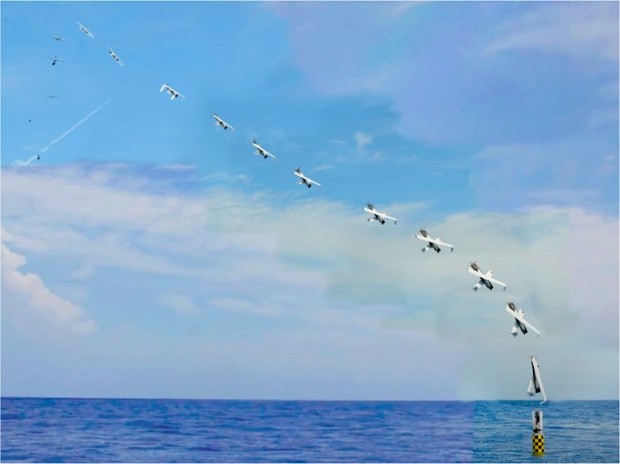 Sequence photo of the launch of the XFC — Photo/NAVSEA-AUTEC

The US Naval Research Laboratory announced that it had successfully launched a drone from a submerged submarine. The all-electric eXperimental Fuel Cell Unmanned Aerial System was launched in the Bahamas from the Los Angeles-class nuclear-powered attack submarine USS Providence using a system that allowed the drone to be deployed without modifications to the boat, or requiring it to surface.

The XFC unmanned aircraft was developed by the NRL in less than six years from initial concept to current stage. It’s all electric and powered by a fuel cell that allows it to stay aloft for more than six hours. According the the NRL, the UAV is relatively low cost, flies at low altitude, and is designed for Intelligence Surveillance and Reconnaissance missions. The craft has folding wings and is designed to be launched from a pickup truck or small surface vessel.

For the submarine test, the XFC was placed inside of a “Sea Robin” launch vehicle. The Sea Robin fits inside of a standard vertical Tomahawk missile launch tube, such as those aboard the USS Providence. After launching, the Sea Robin rose to the surface and took on the appearance of a spar buoy.

After the Sea Robin opened, the XFC used its electrically-assisted take-off system to raise itself vertically out of the container, and after reaching operating speed and altitude unfolded its wings for horizontal flight. The XFC flew for several hours as it beamed back a video feed to the Providence.

It then returned to the submarine and its surface support vessels before landing at the Naval Sea Systems Command Atlantic Undersea Test and Evaluation Center on Andros Island in the Bahamas.

If only our government might spend half the time and money on doing something useful with this whole process – I might not feel this is just another waste of taxpayer dollars.