Cubli is a cube that can balance on a corner or edge or walk around by flipping over its edge or can be ordered to have a smooth fall.

The cube, six inches in length, was developed by researchers at ETH Zurich’s Institute for Dynamic Systems and Control and can maintain its balance if pushed over. The cube relies on three spinning motors to get it going that will spin faster, slower or stop to help maintain its balance or continue the flipping motion…

In addition to balancing, the motors can also be used to achieve a controlled fall such that the Cubli can be commanded to fall in any arbitrary direction. Combining these three abilities — jumping up, balancing, and controlled falling — the Cubli is able to ‘walk’.

Tech that has many uses in devices small and large, terrestrial and bound for the emptiness of space. And probably more profitable than we might imagine if it could be mass-produced, more or less affordable – in shiny colors. 🙂

As a nomadic cultural historian, my subjects have led me in wildly different directions. I spent every Friday for five years in a dim, dusty reading room in West Orange, New Jersey, formerly a laboratory on the second floor of Thomas Edison’s headquarters, deciphering the blunt-penciled scrawls of the celebrated inventor. Two years after my biography of Edison appeared, I found myself laboring up vertiginous stairs at daybreak in Mexico, photographing the faded ocher outlines of winged snakes etched into stone temples at the vast ruins of Teotihuacán. The daunting treks led to a book on Mesoamerican myth, Legends of the Plumed Serpent.

Those two disparate worlds somehow collided unexpectedly on a recent afternoon in the hushed, temperature-controlled precincts of the National Museum of the American Indian storage facility in Suitland, Maryland. There, staffers pushing a rolling cart ushered one of the museum’s greatest treasures into the high-ceilinged room. Nestled in an acid-free corrugated cardboard container was the earliest known example of telephone technology in the Western Hemisphere, evoking a lost civilization—and the anonymous ancient techie who dreamed it up. 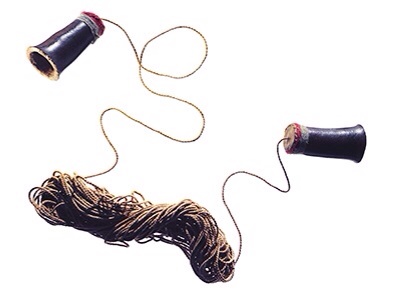 The gourd-and-twine device, created 1,200 to 1,400 years ago, remains tantalizingly functional—and too fragile to test out. “This is unique,” NMAI curator Ramiro Matos, an anthropologist and archaeologist who specializes in the study of the central Andes, tells me. “Only one was ever discovered. It comes from the consciousness of an indigenous society with no written language.”

We’ll never know the trial and error that went into its creation. The marvel of acoustic engineering—cunningly constructed of two resin-coated gourd receivers, each three-and-one-half inches long; stretched-hide membranes stitched around the bases of the receivers; and cotton-twine cord extending 75 feet when pulled taut—arose out of the Chimu empire at its height. The dazzlingly innovative culture was centered in the Río Moche Valley in northern Peru, wedged between the Pacific Ocean and the western Andes. “The Chimu were a skillful, inventive people,” Matos tells me as we don sterile gloves and peer into the hollowed interiors of the gourds. The Chimu, Matos explains, were the first true engineering society in the New World, known as much for their artisanry and metalwork as for the hydraulic canal-irrigation system they introduced, transforming desert into agricultural lands.

Reflect upon the genius of an inventor designing a device beyond the capabilities of the epoch wherein he lived. Like DaVinci, he or she conceived of a need whose satisfaction was utilitarian – though the technology to achieve broad use didn’t exist.

Still, the best possible device was made and presumably used. Proof of concept existed. Maybe this early can-and-cord phone was used on a regular basis for who knows how long?

With no written language there is no record of the inventor or this phone’s use. 1200 years ago.

Brazil had been struggling for years to decide which company to choose for a $4 billion-plus fighter jet contract, one of the world’s most sought-after defense deals and one that would help define the country’s strategic alliances for decades to come.

But Rousseff, the leftist president known for being sometimes gruff and even standoffish with foreign leaders, was thrilled after a 90-minute meeting in Brasilia on May 31 with U.S. Vice President Joe Biden.

After Biden’s reassurances that the United States would not block crucial transfers of technological know-how to Brazil if it bought the jets, she was closer than ever to selecting Chicago-based Boeing to supply its fighter, the F/A-18 Super Hornet.

“She’s ready to sign on the dotted line,” one of her senior aides told Reuters at the time. “This is going to happen soon.”

And then along came Edward Snowden.

On Wednesday, she surprised the defense and diplomatic worlds by tapping Sweden’s Saab to supply the jets, a move aides said was made in part as a deliberate snub to the United States.

The decision was one of the biggest and most expensive consequences yet of the NSA revelations, which have strained Washington’s relations with countries around the world.

RTFA. Long with lots of detail. Including official reasons for the change in plans – and excuses from American politicians. All crap.

Boeing would have had the contract, thousands of jobs would have had added security, investors and workers alike would have profited. But, the legitimate anger against indiscriminate spying by the NSA creepshow working away like a horde of criminal elves in every presidential workshop since Reagan – brought a result that shouldn’t have been a surprise. Not since Edward Snowden blew the whistle on Spies, Incorporated under the NSA/United States banner.

Please, don’t kid yourself into thinking this is a one-off. Every US headquartered company that’s trying to export something will be asked by every prospective customer – do your products come with a built-in backdoor for the NSA?

All the paranoid accusations made by Congress since the earliest days of the first Cold War have come home to roost like magnetic chickens.

Starting later today, some of the most capable humanoid robots in the world will congregate in Miami, where 17 teams will spend two days competing to prove they have built the machine to trust in a natural or man-made disaster situation. Up to eight winners will move on to the finals next year, where they will have a chance at winning $2 million.

The robots will compete in eight tasks that measure how they would perform in an unpredictable disaster situation.

More waiting for you over at the GigaOm article by Signe Brewster.