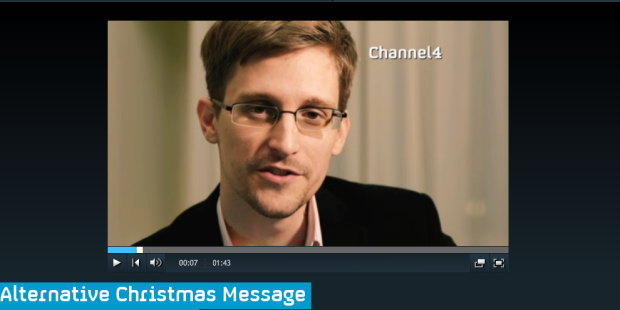 Edward Snowden, the whistleblower who prompted a worldwide debate when he leaked a cache of top secret documents about US and UK spying, has recorded a Christmas Day television message in which he calls for an end to the mass surveillance revealed by his disclosures.

The short film was recorded for Channel 4, which has 20-year history of providing unusual but relevant figures as an alternative to the Queen’s Christmas message shown by other UK broadcasters. It will be Snowden’s first television appearance since arriving in Moscow…

In excerpts from the address released by Channel 4, Snowden says George Orwell “warned us of the danger of this kind of information” in his dystopian novel, 1984.

Snowden says: “The types of collection in the book – microphones and video cameras, TVs that watch us – are nothing compared to what we have available today. We have sensors in our pockets that track us everywhere we go. Think about what this means for the privacy of the average person.

“A child born today will grow up with no conception of privacy at all. They’ll never know what it means to have a private moment to themselves an unrecorded, unanalysed thought. And that’s a problem because privacy matters; privacy is what allows us to determine who we are and who we want to be.”

I have come to agree that Snowden is a legitimate hero of the people of the United States, likely the whole world. You can nitpick about how he combs his hair or doesn’t and where he’s found at least temporary asylum. That doesn’t take away from the discussion of our rights that was provoked by his whistleblowing.