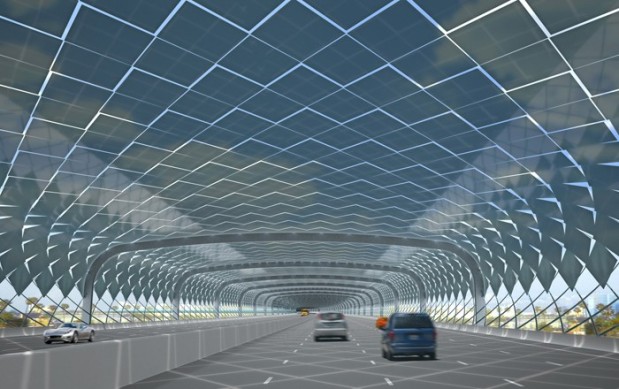 A reminder of another public space to install solar panels

Researchers from North Carolina State University and the Chinese Academy of Sciences have found an easy way to modify the molecular structure of a polymer commonly used in solar cells. Their modification can increase solar cell efficiency by more than 30 percent.

Polymer-based solar cells have two domains, consisting of an electron acceptor and an electron donor material. Excitons are the energy particles created by solar cells when light is absorbed. In order to be harnessed effectively as an energy source, excitons must be able to travel quickly to the interface of the donor and acceptor domains and retain as much of the light’s energy as possible.

One way to increase solar cell efficiency is to adjust the difference between the highest occupied molecular orbit (HOMO) of the acceptor and lowest unoccupied molecular orbit (LUMO) levels of the polymer so that the exciton can be harvested with minimal loss. One of the most common ways to accomplish this is by adding a fluorine atom to the polymer’s molecular backbone, a difficult, multi-step process that can increase the solar cell’s performance, but has considerable material fabrication costs.

A team of chemists led by Jianhui Hou from the Chinese Academy of Sciences created a polymer known as PBT-OP from two commercially available monomers and one easily synthesized monomer. Wei Ma, a post-doctoral physics researcher from NC State and corresponding author on a paper describing the research, conducted the X-ray analysis of the polymer’s structure and the donor:acceptor morphology.

PBT-OP was not only easier to make than other commonly used polymers, but a simple manipulation of its chemical structure gave it a lower HOMO level than had been seen in other polymers with the same molecular backbone. PBT-OP showed an open circuit voltage (the voltage available from a solar cell) value of 0.78 volts, a 36 percent increase over the ~ 0.6 volt average from similar polymers.

According to NC State physicist and co-author Harald Ade…we have found a chemically easy way to change the electronic structure and enhance device efficiency by capturing a larger fraction of the light’s energy, without changing the material’s ability to absorb, create and transport energy.”

I wonder when the Confederate trolls in the North Carolina statehouse and their counterparts in Congress will notice this project. Not only does the research further the progress of alternative energy sources, this was a joint project funded by the U.S. Department of Energy…and the Chinese Ministry of Science and Technology.

Government researchers have tagged 338 sharks with acoustic transmitters that monitor where the animals are. When a tagged shark is about half a mile away from a beach, it triggers a computer alert, which tweets out a message on the Surf Life Saving Western Australia Twitter feed. The tweet notes the shark’s size, breed and approximate location…

The tagging system alerts beachgoers far quicker than traditional warnings, says Chris Peck, operations manager of Surf Life Saving Western Australia. “Now it’s instant information,” he tells Sky News, “and really people don’t have an excuse to say we’re not getting the information. It’s about whether you are searching for it and finding it.”

The tags will also be monitored by scientists studying the sharks. Researchers have tagged great whites, whaler sharks and tiger sharks.

“This kind of innovative thinking is exactly what we need more of when it comes to finding solutions to human-wildlife conflict,” says Alison Kock, research manager of the Shark Spotters program in South Africa. Kock tells NPR that the project is a good idea — but that people should know that not all sharks are tagged…

Kock and Kim Holland, a marine biologist who leads shark research at the University of Hawaii, agree that the tweets won’t be enough to protect swimmers.

“It can, in fact, provide a false sense of security — that is, if there is no tweet, then there is no danger — and that simply is not a reasonable interpretation,” Holland says, pointing out that the reverse is also true. “Just because there’s a shark nearby doesn’t mean to say that there’s any danger. In Hawaii, tiger sharks are all around our coastlines all the time, and yet we have very, very few attacks…”

The typical human response when something wild and natural kills something tame and unnatural that has invaded their evolutionary habitat – is to kill the wild beast. This is only exaggerated by governments who [of course] must consider additional aspects of the question. Like – how will these people vote in the next election if I’m not perceived as a father figure/protector.

Once in a lifetime: Upton Sinclair, Daniel Ellsworth, Edward Snowden

The National Security Agency on Saturday released a statement in answer to questions from a senator about whether it “has spied, or is … currently spying, on members of Congress or other American elected officials”, in which it did not deny collecting communications from legislators of the US Congress to whom it says it is accountable.

In a letter dated 3 January, Senator Bernie Sanders of Vermont defined “spying” as “gathering metadata on calls made from official or personal phones, content from websites visited or emails sent, or collecting any other data from a third party not made available to the general public in the regular course of business”…

…The agency pointed to “privacy protections” which it says it keeps on all Americans’ phone records.

The statement read: “NSA’s authorities to collect signals intelligence data include procedures that protect the privacy of US persons. Such protections are built into and cut across the entire process. Members of Congress have the same privacy protections as all US persons. NSA is fully committed to transparency with Congress…

Same as it ever was. Our government lies about lying.