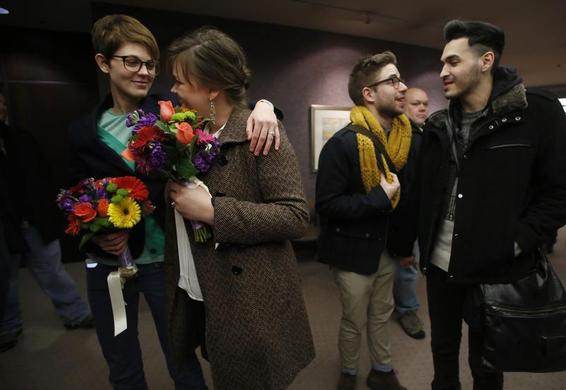 The Obama administration on Friday made the latest contribution to a fast moving legal battle over same-sex marriage rights, as the Justice Department said that the federal government would recognize as lawful the marriages of some 1,300 same-sex couples in Utah even though the state government is largely refusing to do so…

“I am confirming today that, for purposes of federal law, these marriages will be recognized as lawful and considered eligible for all relevant federal benefits on the same terms as other same-sex marriages,” said Attorney General Eric H. Holder Jr. in an unusual video announcement on the Justice Department website. “These families should not be asked to endure uncertainty regarding their status as the litigation unfolds…”

On Wednesday, Gov. Gary R. Herbert announced that the ban, an amendment to the Utah Constitution, was back in legal force while the litigation continued, something that could take years. During that time, he said, the state would not recognize or confer new marital benefits to those same-sex couples who had married.

But with Friday’s announcement, same-sex couples in Utah who married will be able to file joint federal income tax returns and will be eligible for other spousal benefits, like health insurance for the families of federal employees and the ability to sponsor a noncitizen spouse for a family visa…

In Utah, gay couples and supporters of same-sex marriage cheered the federal government’s move. Many were disappointed and angered by the state’s decision not to recognize their new marriages, and have argued that, despite the continuing legal battle, their nuptials are just as valid as any other in Utah.

“It feels like a little victory after the last couple days with our governor,” said Austin Vance, who married his partner last month at the Salt Lake County clerk’s office, with hundreds of other gay couples. “It definitely raises spirits a little bit. It was disturbing that our governor would make those assertions that we wouldn’t be recognized.”

“We’re going to continue to file and act as if we’re married,” he added. “Some people have said that’s an act of civil disobedience. If it is, so be it…”

Sooner or later, Utah – like other backward states – will have to move into the 21st Century. They may not wish to recognize science trumping superstition, reality taking precedence over bigots and know-nothings. But, so far, our Constitution is still recognized as giving superior rule by law for our federal Union over States Rights and the hypocrites that invoke them whenever convenient to their need to have some Americans declared second-class citizens.