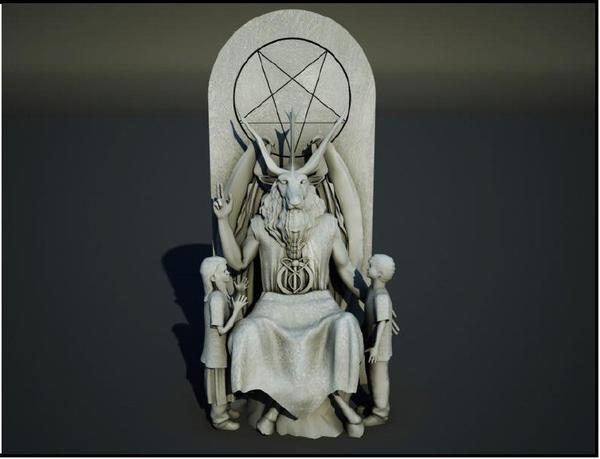 A group of Satanists from New York City have raised more than $17,000 in their efforts to erect a monument outside the Oklahoma Statehouse, saying they wish to counterbalance a Ten Commandments monument placed there in 2012.

The Satanic Temple unveiled the design of its 7-foot-tall monument featuring a seated Baphomet figure flanked by two children this week, and launched an Indiegogo campaign to raise $20,000 last month.

“Our monument celebrates an unwavering respect for the Constitutional values of religious freedom and free expression,” explained Lucien Greaves, a spokesman for the Satanic Temple. “Satanism is a fundamental component at the genesis of American liberty. Medieval witch-hunts taught us to adopt presumption of innocence, secular law, and a more substantive burden of proof.”

After a rush of other religious groups, including Hindus and the atheist Church of the Flying Spaghetti Monster, proposed monuments of their own, the Oklahoma Capitol Preservation Commission voted unanimously to place a temporary moratorium on new monuments.

“This is a faith-based nation and a faith-based state,” said Rep. Earl Sears, R-Bartlesville. “I think it is very offensive they would contemplate or even have this kind of conversation…”

Perish the thought a Christian fundamentalist would tolerate folks having a different belief.

Oklahoma isn’t the first state to wage its battle over the involvement of church in government: Last month, a secular group of students erected a monument to the Flying Spaghetti Monster in the Wisconsin State Capitol Rotunda.

“We would prefer to keep our Capitol secular but if the state decides to turn it into an open forum, they have opened the floodgates,” said Sam Erickson, president of the Atheists, Humanists, and Agnostics at the University of Wisconsin at Madison. “We hope everyone takes advantage of this opportunity to advertise their own viewpoints, no matter how silly.”

Living in a community that includes a few Charismatic Catholics who believe in the need for self-flagellation in order to qualify for entrance into their heaven – I certainly understand wide variety in beliefs as thoroughly as I do our national Constitution and the intent to maintain a nation independent of religious regulation.

That we still have states sufficiently backwards as to require a state religion is no more a surprise than communities capable of voting to force second-class citizenship upon Americans by virtue of color, religion, ethnicity or sexual orientation.

Ten years ago, when the rovers Spirit and Opportunity landed on Mars as part of NASA’s Mars Exploration Rover mission, engineers expected them to each last 90 Martian days, about three months of Earth time. Spirit lasted a remarkable six years before getting stuck in soft sand, and ultimately losing radio contact with its minders on Earth.

Compared to Opportunity, though, Spirit was a flash in the pan. Hundreds of millions of miles away in the bitter Martian cold, Opportunity has kept on ticking—exploring new areas, taking scientific measurements and capturing beautiful photos—this entire time.

As part of a new exhibition at the National Air and Space Museum, “Spirit and Opportunity: 10 Years Roving Across Mars,” John Grant and other scientists involved with the mission have curated 50 of the most scientifically significant and visually stunning photos taken by the rovers over the years from a collection of several hundred thousand images.

Here are a few of those photos.

Will this become standard equipment?

When a Houston firefighter came across an 18-wheeler with smoke pouring out of it on Texas 71, he didn’t have any water with him because it was his day off…He got creative.

During a trip back from Austin with his wife, Capt. Craig Moreau was able to assist a truck driver putting out a brake fire on his vehicle by using the truck’s cargo — Coors Banquet beer.

“The brakes had caught and the tire was burning,” said Moreau. “I crawled underneath and thought we’d got it out but it flared back up. So I said to the driver, ‘what have you got in here?'”…

“Thankfully they were tall-boys,” Moreau said. “I couldn’t help but laugh at the irony of it all, he was so shaken up that the humor escaped him.”

All three people at the scene started shaking and spraying and cans of beer on the blaze and it was eventually extinguished.

“I have no doubt if the beer hadn’t been there, the whole trailer would have burned up,” Moreau said. “A few more minutes down the road and it may not have worked. It’s in our nature to help folks, but this is the first time I’ve done it with beer.”

Poisonally, I think this is about the best thing you can do with Coors Beer.