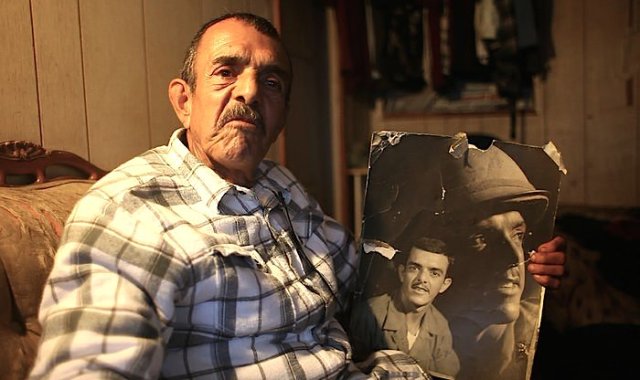 Hector Barrios died this week. It’s okay if you’ve never heard of him. You have no reason to know who he is.

The short version: Hector was a decorated U.S. veteran who died abroad, impoverished and estranged from the country he loved and served, with none of the benefits entitled to him as a veteran.

Barrios was born in Tijuana, Mexico. In 1961, at the age of 18, he moved to the United States. In 1967, at the age of 24, he was drafted into the U.S. military to do his part for the war effort. He did not go back to Mexico or hide out in Canada. He did not dodge the draft or evade the call to duty. Hector spent a year in Vietnam, fighting for his adopted country…

Barrios was injured fighting for America, took head wounds in combat, but he survived the war and was able to return home.

“Thank God I came back. Many of my fellow soldiers didn’t make it back.”

Barrios received the Army Commendation Medal for exceptionally meritorious service and his discharge paperwork listed him as a U.S. citizen. He earned his citizenship with blood and his friends say he was proud to be an American…

And after being arrested and convicted for possession of marijuana, Barrios was summarily deported from the country…

“I had a green card. They took it away. But I have my citizenship of the United States in my service paperwork. I took an oath,” he says in a video recorded on the weekend before veteran’s day 2012.

…Hector lived out the rest of his life in Tijuana, in poverty…This man who fought and was injured serving America was allowed to live out the rest of his natural life with none of the Social Security or healthcare benefits veterans are entitled because he was caught with some pot…

Supporters of people like Hector are trying to get Congress to pass immigration reform bills that allow deported vets to return to their homes. I wouldn’t hold my breath as long as the most ignorant electorate in the Western world continues to vote the most heartless and hated politicians in the Western world back into office.

It will come as little surprise…to learn that the NSA appears to be probing burner use as part of its controversial efforts to collect and surveil American phone records. The revelation comes via the Just Security blog, where Julian Sanchez describes how the NSA collected information that resembles a “fingerprint” of burner use: records of when a phone went online, and when it stopped being used; total number of calls; and the ratio of unique contacts to calls:

this is the kind of information you would want if you were trying to identify disposable prepaid “burner” phones being used by a target who routinely cycles through cell phones as a countersurveillance tactic. The number of unique contacts and call/contact ratio would act as a kind of rough fingerprint—you’d assume a phone being used for dedicated clandestine purposes to be fairly consistent on that score—while the first/last call dates help build a timeline: You’re looking for a series of phones that are used for a standard amount of time, and then go dead just as the next phone goes online.

Sanchez gleaned the information from written testimony by NSA Director Keith Alexander, who described a “background process” that involves repeated queries to a massive database of phone records collected by the phone carriers at the request of the spy agency.

Under the law, the NSA is only supposed to search the database when it can demonstrate to America’s secret spy court that it has a “reasonable, articulable suspicion” to do so…Anyone out there believe that?…Last month, the government admitted it has a test project that uses the database to track people’s location.

As Sanchez points out, news that the NSA is using the phone database to look for patterns of burner use would have fewer civil liberties implications than some of the agency’s other activities; however, the revelation shows again how the agency will use the metadata it has amassed for new or unexpected ways — and that there is a lack of clear rules for how it can or can’t probe the metadata.

The once-secret info from Keith Alexander just made it into the public view as the result of lawsuits, of course. Freedom of Information under Obama ain’t doing a whole boatload better than it did under Bush. The really chilling part is that this is 5-year-old information about more ways the NSA can snoop on us.

Many Western nations have experienced significant declines in crime in recent decades, but could the removal of lead from petrol explain that?

Working away in his laboratory in 1921, Thomas Midgley wanted to fuel a brighter tomorrow. He created tetraethyl lead – a compound that would make car engines more efficient than ever.

But did the lead that we added to our petrol do something so much worse? Was it the cause of a decades-long crime wave that is only now abating as the poisonous element is removed from our environment?

For most of the 20th Century crime rose and rose and rose. Every time a new home secretary took office in the UK – or their equivalents in justice and interior ministries elsewhere – officials would show them graphs and mumble apologetically that there was nothing they could do to stop crime rising.

Then, about 20 years ago, the trend reversed – and all the broad measures of key crimes have been falling ever since…

But there are some people that believe the removal of lead from petrol was a key factor.

Lead can be absorbed into bones, teeth and blood. It causes kidney damage, inhibits body growth, causes abdominal pain, anaemia and can damage the nervous system. More than a century ago, a royal commission recommended to British ministers that women shouldn’t work in lead-related industry because of damage to their reproductive organs.

By the 1970s, studies showed that children could even be poisoned by chewing fingernails harbouring tiny flecks of old leaded paint from their homes and schools.

Studies have shown that exposure to lead during pregnancy reduces the head circumference of infants. In children and adults, it causes headaches, inhibits IQ and can lead to aggressive or dysfunctional behaviour.

If you want to understand the causes of crime – and be tough on them – you need to start with lead, says Dr Bernard Gesch, a physiologist at Oxford University who has studied the effect of diet and other environmental factors on criminals.

RTFA for pros and cons and all the gray areas in between. It’s an interesting study that needs to be pursued further – and needs to be tracked as we continue to detox our population from lead.

Those who claim no link between lead poisoning even at minute levels and behavior are decades out of date. I did a wee bit of support work for physicians connected with the original work done by MCHR, the Medical Committee for Human Rights, in and around the Yale School for Public Health. At the vector of children affected by lead paint, the effects were direct and substantial.

Still, read on. Think about it.

The tiny Pacific nation of the Marshall Islands is taking on the United States and the world’s eight other nuclear-armed nations with an unprecedented lawsuit demanding that they meet their obligations toward disarmament and accusing them of “flagrant violations” of international law.

The island group that was used for dozens of U.S. nuclear tests after World War II filed suit Thursday against each of the nine countries in the International Court of Justice in The Hague, Netherlands. It also filed a federal lawsuit against the United States in San Francisco, naming President Barack Obama, the departments and secretaries of defense and energy and the National Nuclear Security Administration.

The Marshall Islands claims the nine countries are modernizing their nuclear arsenals instead of negotiating disarmament, and it estimates that they will spend $1 trillion on those arsenals over the next decade…

The countries targeted also include Russia, Britain, France, China, Israel, India, Pakistan and North Korea. The last four are not parties to the 1968 Nuclear Nonproliferation Treaty, but the lawsuits argue they are bound by its provisions under “customary international law.” The nonproliferation treaty, considered the cornerstone of nuclear disarmament efforts, requires negotiations among countries in good faith on disarmament.

The Marshall Islands were the site of 67 nuclear tests by the United States over a 12-year period, with lasting health and environmental impacts.

“Our people have suffered the catastrophic and irreparable damage of these weapons, and we vow to fight so that no one else on earth will ever again experience these atrocities,” the country’s foreign minister, Tony de Brum, said in a statement announcing the lawsuits.

The country is seeking action, not compensation. It wants the courts to require that the nine nuclear-armed states meet their obligations…

The Marshall Islands is asking the countries to accept the International Court of Justice’s jurisdiction in this case and explain their positions on the issue.

The court has seen cases on nuclear weapons before. In the 1970s, Australia and New Zealand took France to the court in an effort to stop its atmospheric nuclear tests in the Pacific.

I doubt if our so-called Liberal president will find room in his heart to defend the rights and needs of these island folk. After all, they’re not sitting on uninhabited rocks in the South China Sea important to Japan’s quest for oil.