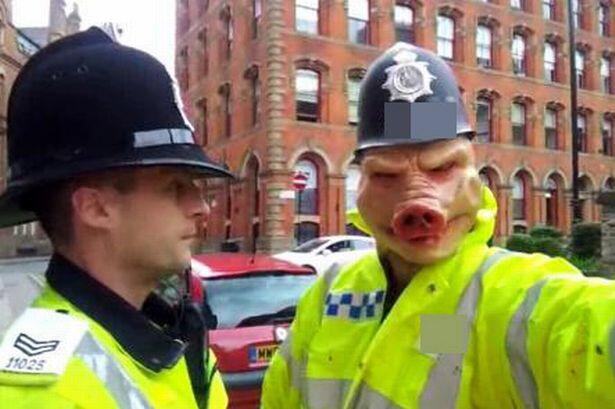 Arrested for impersonating a police officer

Greater Manchester Police arrested a man who put on a pig mask, toy helmet and reflective jacket in order to perform “comical parodies” about the behavior of law enforcement officials.

New Moston man Steven Peers was arrested on suspicion of impersonating a police officer after he put on the costume to call attention to how GMP officers conducted themselves during anti-fracking protests.

I’m never surprised at coppers who have no sense of humor, understanding of free speech or actually – liberty of expression in any form.

Sky-watchers all across North America are in for a real treat in the early morning hours of May 24 – there’s a brand new meteor shower that may light up the night sky. Scientists aren’t sure yet how many shooting stars people may see, but the May Camelopardalids meteor shower could be at a dazzling one-per-minute rate.

This is the first time Earth will directly cross the dusty trails left behind by a recently discovered comet named Comet 209P/LINEAR. Discovered in 2004, this comet’s path has been slowly altered by Jupiter’s gravity over the last 200 years and the leftover dust will now cross Earth’s path. That’s good news for those in North America who – weather permitting – will have a front-row seat to see Mother Nature’s celestial display of fireworks. The meteors will appear from the northern constellation Camelopardalis…

“What’s really nice about this particular comet [209P/Linear] is that we’re going right smack in the middle of these dust trails and the meteors are going to be pretty slow,” Carl Hergenrother said. “They’re actually going to last maybe for a second or two. It’s going to look almost like slow moving fireworks instead of the usual shooting stars that we’re used to.”

The peak of the shower will be between 2 a.m. and 4 a.m. EDT, but Hergenrother said sky-watchers will still see meteors for several hours before and after those times. The biggest advice he has for people is to find a dark, safe place to get cozy and watch the stars…

Rep. Lamar Smith (R-Texas), chairman of the House Science, Space, and Technology Committee, has a long track record of climate change denial. And under his leadership, the committee has spent more time holding hearings on the existence of extraterrestrial life than it has examining climate science or the repercussions of global climate change.

The House and Senate have held a combined 19 hearings on space exploration during the 113th Congress, according to a report Wednesday in the National Journal. Smith’s committee alone has organized 15 of those hearings, including three that focused on discovering alien life.

Several House committees are responsible for addressing U.S. energy and environmental issues. The House Energy and Commerce Committee has held only one hearing on climate change, while the House Natural Resources Committee has yet to take up the issue in the 113th Congress.

Numerous sitting members of the House Science Committee have expressed views rejecting the scientific consensus on climate change. Committee member James Sensenbrenner (R-Wisc.) has gone so far as to call climate change a “massive international scientific fraud” and evidence of “scientific fascism,” while Paul Broun (R-Ga.), a young Earth creationist, believes the Earth was “created in six days as we know them.”

“You could argue that it makes sense for the House Science Committee to rigorously discuss outer space — after all, it’s right there in the committee’s name,” wrote The National Journal’s Emma Roller, who tallied up the hearing topics. “But you could also argue that when the committee you chair has the word ‘science’ in its name, you may want to discuss the premier scientific debate that’s going on.”

The Party of NO is thorough in that they are also the Party of Know-Nothing.

Everything from your smartphone to the Nissan Leaf in the parking lot is powered by rechargeable Lithium-ion batteries, in which lithium ions move from the negative electrode to the positive one during discharge and vice versa when charging. However, they come with a lot of disadvantages…

Overheating, long charging times, limited power density, relative short lifetime and the fact they are not 100 percent recyclable are their major setbacks. But these will soon disappear when the new carbon-based battery will replace them.

The concept of a battery made using carbon dates back from the 70s, but starting around 7 years ago Power Japan Plus started to improve the idea and now are presenting us the “Ryden” (‘god of thunder’ in Japan) disruptive carbon battery.

Both of its electrodes are made out of processed cotton which is turned into a new form of carbon fiber. The electrolyte in the battery is also made out of an organic fluid, meaning that there are no toxic materials in there at all and the whole battery is 100% recyclable…

Another great advantage of the Ryden battery is that it can last up to 3,000 charge-discharge cycles, which is around three times more than current batteries and it won’t heat up whatever you do with it.

Power Japan starts pilot production of 18,000+ such carbon cells later this year for specialty applications…The company also plans to license the technology to automakers for plug-in hybrids and electric vehicles.

Even if this ain’t the be-all and end-all. The energy and effort is finally being exerted to surpass century-old tech.